Islamabad, Pakistan – Former Pakistani President Asif Ali Zardari grins like a Cheshire cat – looking a little worse for wear three weeks after he was arrested on corruption charges – as he begins an hour-long interview with journalist Hamid Mir.

A few minutes in, Mir, the country’s most-watched television news show host, asked Zardari about his belief that charges against him are politically motivated but transmission was interrupted by a commercial break, a bowl of frozen chicken meatballs exploding onto the screen.

The rest of the interview never aired.

Maryam, daughter of former three-time Prime Minister Nawaz Sharif who was controversially removed from power in 2017 and is serving a jail sentence for corruption, alleged in the press conference that she had evidence the judge who jailed her father had done so under pressure.

Less than a week later, a live interview with Maryam Nawaz on Hum News was “stopped forcefully” a few minutes into transmission, according to Nadeem Malik, the journalist who conducted it.

These were the latest incidents in what journalists in Pakistan described to Al Jazeera as a sustained campaign of censorship that has targeted news organisations across the board, banning coverage of opposition politicians – and dissent more generally – under the aegis of Prime Minister Imran Khan‘s government and the country’s powerful military.

Transmission of Geo News, his employer, remains disrupted across the country.

Pakistan has had a chequered history with press censorship, military rulers and politicians alike imposing strict rules on what could be reported, often citing national security.

“We do not have any instrument, law or anything else by way of which we could apply pressure to anyone,” said ministry spokesperson Tahir Khushnood.

In response to Al Jazeera’s questions, Pakistan’s military spokesperson said the “[media regulator] undertakes such regulatory measures as per law”.

Journalists say this time the censorship is worse than in the past because it is not imposed through formalised regulations.

“Earlier, we knew who was angry with us, who was pressuring us, and who was imposing censorship on us,” said Mir. “Now, they are so brave that we can’t tell who is doing it, no one is owning it and everything is happening.”

‘We need to shut this down’

“The Pakistani media, in my opinion, is even freer than the British media,” he said, advocating for greater internal media regulation. “The media in Pakistan is not just free, but sometimes out of control.”

Days later, media rights group Reporters Without Borders (RSF) termed that claim “an obscenity” in an open letter to Khan, documenting a series of attacks on press freedom perpetrated during Khan’s tenure, including legal cases against journalists, suspension of news channels and fatal attacks on reporters.

“These brazen cases of censorship, which seriously threaten journalistic independence and pluralism, are characteristic of non-democratic regimes,” said RSF secretary-general Christophe Deloire in the letter.

Now they don't threaten your life, they threaten the organisation's life.

Pakistani journalists told Al Jazeera the red lines on what they can and cannot report are now clear.

“The unspoken rule that certain people, personalities or parties are not to get any coverage is sacrosanct,” said a senior journalist working for a television news channel, speaking on condition of anonymity for fear of reprisals.

He narrated how, last month, he was ordered to stop coverage of Maryam Nawaz addressing a political rally in the western city of Quetta.

“[They] said we need to shut this down, delete it and remove it [off the website and social media].”

The journalist documented further cases where he was either ordered to cease coverage or remove reports deemed critical of the state or the military from digital platforms.

“You can’t tweet something critical and survive. You can’t speak the truth about what’s happening or what happened – if you speak the truth, trust me, I think you’re going to vanish [off-air].”

Amber Shamsi, a television news show host, echoed that sentiment, saying that where censorship used to affect only certain kinds of dissent, its scope is now much broader.

Shamsi said that since the interrupted interviews in early July, there was an unannounced ban on any media channels interviewing prominent opposition politicians such as Maryam Nawaz and Zardari and that it was “completely off-limits” to cover such politicians live on television.

“With Maryam Nawaz, you can no longer run clips on your shows, interviews are out of the question.”

Information ministry spokesperson Khushnood denied there was a ban on covering opposition politicians, despite a federal cabinet order in early July asking the media regulator to stop coverage of leaders accused of corruption.

The media in Pakistan is not just free, but sometimes out of control.

Managers at news organisations said the punishment for non-compliance with the unwritten rules can be immediate and dire.

“If there is a programme that the establishment or the PTI government don’t like, they won’t call the journalist, they will call the managers, or they’ll just shut down the channel,” said one Karachi-based senior television journalist, speaking on condition of anonymity for fear of reprisals.

“The mechanism used [for censorship] is to shut down the channel or stop the newspaper’s distribution. Then when we go to them to find out what is happening, that is when demands are made.”

“They have a one-window operation, usually a WhatsApp group,” said one Karachi-based senior television producer. “A tweet or a screenshot will be shared on that group [by a military officer]. And a question mark.”

Other journalists confirmed the existence of such WhatsApp groups.

Asked what the penalties for non-compliance were, the journalist laughed. “Besides going off-air, magically? Besides that?”

The crackdown on dissent by the government and military includes arrests and intimidation that go beyond the media, rights groups and political leaders say, with the media unable to cover those events critically.

Muhammad Ismail, a retired professor and development consultant, sits in his modest two-storey home in the suburbs of the Pakistani capital Islamabad, wondering when armed men would raid his house next.

Ismail’s daughter, Gulalai Ismail, 33, is a prominent feminist and activist in the Pashtun Tahaffuz Movement (PTM), an ethnic Pashtun rights group that has been campaigning since 2018 for the military to be held accountable for alleged rights violations committed in its war against the Taliban in the country’s northwest.

In late May, after several unsuccessful raids on her home to arrest her on sedition charges, Gulalai went into hiding. Days later, unidentified men once again raided the house, her father said, this time taking away their driver, Nadeem-ur-Rehman, and allegedly torturing him with drugs and electric shocks for information on her whereabouts.

“The whole world, as well as Pakistan, says she is an icon for women’s rights and peace,” he said. “But now when she points out things … that they disapprove of, and suddenly she is a traitor, her parents are traitors.”

When Gulalai fled home, Ismail said he argued with her, warning her to stop her activism because he could not protect her against the military.

“She gave me a very stern answer: ‘If I don’t […] raise my voice, and I just take money from NGOs, then that means it is another kind of prostitution. This is not human rights activism, it is prostitution. And I cannot bargain on women’s rights’,” he recalls her saying as she left.

Ghafoor, the military spokesperson, denied any raids were carried out, saying Gulalai Ismail was “at large, presumably to evade trial by the court of law”.

Asked if the news media could cover Gulalai Ismail’s case, the answer from journalists was clear.

“No, we cannot cover Gulalai’s case,” said Shamsi, the television journalist. “The few times I have mentioned [jailed PTM leaders] Mohsin Dawar and Ali Wazir on air, I found myself stuttering.”

For many journalists, with the stakes so high, much of the censorship has now been internalised, not requiring intervention from the authorities.

“[Journalists] know no new instructions are coming in from the editor, they know the news editor is not stopping them … from writing certain things, but the overall atmosphere that has been created through intimidation and other methods, it is having a psychological impact and it is affecting our journalism,” said Zaffar Abbas, editor-in-chief at Dawn, the country’s leading English language newspaper.

Abbas said that because the censorship is unofficial and undocumented, it is more insidious.

“To deprive the reader of that information and to give an impression that everything that is being printed is the whole truth is far more dishonest than living in an era where there is complete censorship, and you can [openly] say ‘I’m sorry but I am unable to publish this.'”

Right now, it is just about survival. We will see about journalism later.

One journalist said the existential threat to television news organisations posed by shutting down transmission was paralysing.

“The problem is initially, as journalists, you take risks, thinking that there is a threat to your own life,” he said. “Now, they don’t threaten your life, they threaten the organisation’s life. So on your head are all 3,000 employees and everything.”

“We currently don’t plan for years ahead, we’re planning for weeks ahead,” said a senior media executive, who spoke on condition of anonymity fearing reprisals against his news organisation.

Others warned that, in the current era, it was becoming impossible to conduct real journalism.

“I don’t know what journalism is any more,” said Shamsi.

“It used to be very easy. This is a story, this is how you treat it, and you’re done. Now we’re worried about who we’re upsetting and what that means for us and the people we work for and the people who work with us.”

The media executive put it simply: “Right now, it is just about survival. We will see about journalism later.” 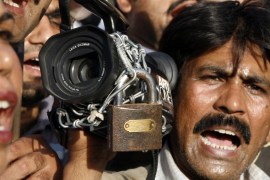 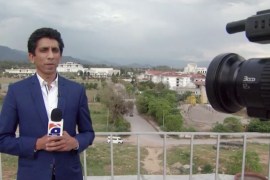 Geo goes dark: Media and the military in Pakistan

Media mystery in Pakistan: who ordered Geo News off the air? Plus, covering the world’s largest biometric database. 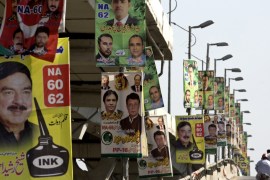 Pakistan urged to protect press freedom ahead of elections

Rights groups call on caretaker PM to allow independent coverage of the election campaigns ahead of July 25 vote. 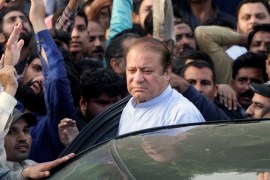 Arrest warrant is issued for journalist in relation to interview with Nawaz Sharif who is to face court on October 8.