Paris, France – Parisians are grappling with the aftermath of a night of anguish, when a fire tore through Notre Dame Cathedral, gutting its roof and toppling its iconic spire as thousands watched on in dismay from the streets.

This morning crowds thronged the banks of the Seine to witness the damage for themselves after hundreds of firefighters battled the inferno through the early hours of Tuesday.

Locals were relieved the damage was not as extensive as they had feared when flames engulfed the medieval masterpiece on Monday evening, billowing smoke across the skyline of the French capital.

Just before midnight firefighters announced that the bulk of the structure had been preserved, including its stone face and distinctive bell towers, though the ribbed oak roof had been reduced to ash. “We consider the two towers of Notre Dame to have been saved,” said Jean-Claude Galler, chief of the Paris fire service.

A full investigation has been launched into the cause of the fire, which prosecutors say was an accident. Authorities are examining whether it began on the roof, which construction workers were renovating. Engineers will conduct a full assessment of the damage and the integrity of the surviving structure.

“The worst has been avoided,” said French President Emmanuel Macron, who rushed to the scene, pledging to restore the 850-year-old cathedral he said was integral to the country’s heritage and identity.

“We will rebuild this cathedral together and it is undoubtedly part of the French destiny and the project we will have for the years ahead,” he said.

The Foundation for French Heritage has launched a national collection to raise funds for the restoration, while two of the country’s wealthiest men, billionaires Bernard Arnault and Francois Pinault, pledged 300 million euros ($340m) from their fortunes.

Most of the priceless relics and treasures inside, which included the purported crown of thorns worn by Jesus Christ and its 8,000 pipe organ, were also spared from destruction.

One of its celebrated rose windows, whose ornate stained-glass designs date to the 13th century, has been confirmed as saved, though there are conflicting reports about the fate of those on the south and west sides of the building.

Churches across the country rang their bells in mourning and solidarity last night, signalling a profound loss that transcends France‘s strict division between religious and secular life.

Notre Dame has survived centuries of war, plague and revolution, surveying Paris from its island perch on the river Seine as it grew from a provincial city to the capital of European culture and politics. It was the scene of Napoleon’s coronation as emperor, the inspiration for Victor Hugo’s classic novel The Hunchback of Notre Dame, and today draws 12 million tourists each year, almost twice the number compared with the Eiffel Tower.

“Notre Dame is burning, France is crying and the whole world, too, is extremely emotional,” the Archbishop of Paris Michel Aupetit told reporters last night.

“I’ve received messages from all over the world … The first message I received was from the Chief Rabbi of France Haim Korsia, who said to me, ‘this is our place and I am crying with you’.”

Sorbonne student Margaret Sos told Al Jazeera she was in shock when she heard the news. “I thought it’s fake news, it’s not possible,” she said. “I cried because I’m Catholic and for me it’s not [just a] beautiful building, it’s also a spiritual place so it’s very hard.”

Parisian Thierry Nico was relieved to see the familiar facade of Notre Dame greet him when he arrived this morning. “We know that probably she will be like before yesterday in 10 years, 15 years, maybe five years, but anyway the structure seems quite solid. I’m emotional but happy,” he told Al Jazeera.

“I think it’s a big deal for all countries. It’s not only a Parisian church, a French church, it’s a kind of monument which belongs to the world.”

The Notre Dame fire as it happened

People from all around the world reacted, and shared their thoughts on social media:

US President Donald Trump said it was horrible to “watch”:

So horrible to watch the massive fire at Notre Dame Cathedral in Paris. Perhaps flying water tankers could be used to put it out. Must act quickly!

UN Secretary Antonio Guterres said that he was “horrified” by the images coming out of Paris.

Horrified by the pictures coming from Paris with the fire engulfing Notre Dame Cathedral – a unique example of world heritage that has stood tall since the 14th century. My thoughts are with the people and government of France. https://t.co/KnLegnlRFH

EU Council President Donald Tusk expressed his condolences after the fire broke at the cathedral.

Former US President Barack Obama said that Notre Dame was one of the world’s great treasures.

Notre Dame is one of the world’s great treasures, and we’re thinking of the people of France in your time of grief. It’s in our nature to mourn when we see history lost – but it’s also in our nature to rebuild for tomorrow, as strong as we can. pic.twitter.com/SpMEvv1BzB

My thoughts are with the people of France tonight and with the emergency services who are fighting the terrible blaze at Notre-Dame cathedral.

Saddened that Notre Dame—that iconic monument dedicated to the worship of our one God & that brought all of us closer through Hugo's literary masterpiece—is partially destroyed after standing through wars & revolution for 800 yrs. Our thoughts are w/ the French & all Catholics. 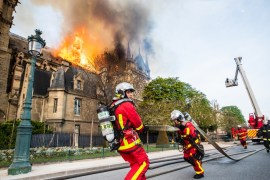 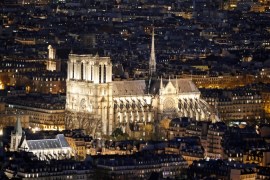 Notre Dame fire: What we know so far 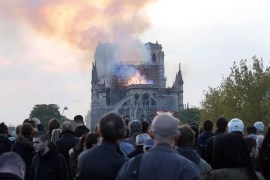 About 400 firefighters battled the fire that destroyed timber roof of the 850-year-old building in Paris.