Dozens of mummified mice have been discovered among about 50 animals found in an ancient tomb that was unveiled in Egypt on Friday.

The well preserved and finely painted tomb discovered near the Egyptian town of Sohag, a desert area near the Nile about 390km south of Cairo, is thought to be from the early Ptolemaic period, dating back nearly 2,000 years ago.

The tomb was built for a man named Tutu and his wife, and is one of the seven discovered in the area last October, when authorities found smugglers digging illegally for artefacts, officials said.

Its painted walls depict funeral processions and images of the owner working in the fields, as well as his family genealogy written in hieroglyphics.

“The tomb is made up of a central lobby, and a burial room with two stone coffins. The lobby is divided in two,” he said.

“It shows images of the owner of the burial room, Tutu, giving and receiving gifts before different gods and goddesses.”

“We see the same thing for his wife, Ta-Shirit-Iziz, with the difference that [we see] verses from a book, the book of the afterlife,” he added.

Two mummies – a woman aged between 35 and 50 and a boy aged between 12 and 14 – were on display outside the shallow burial chamber.

Ptolemaic rule spanned about three centuries until the Roman conquest in 30 BC. 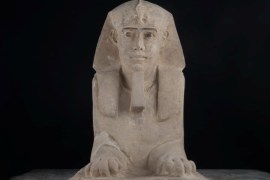 Egyptian archaeologists draining water from a temple in the southern city of Aswan uncover sandstone sphinx. 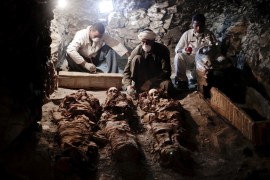 Pharaonic tomb belongs to royal goldsmith who lived more than 3,500 years ago during the reign of the 18th dynasty. 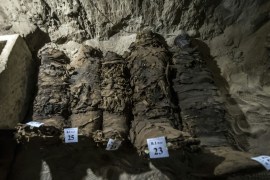 The find is the latest in a number of discoveries that officials hope will help revive the struggling tourism industry. 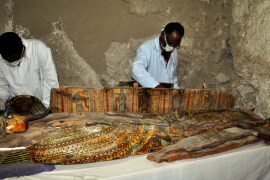 A 3,500-year-old tomb with several mummies, sarcophagi and statues was found in the Draa Abul Nagaa necropolis.