It is a week since the deadly hotel attack in Nairobi. Life appears to have returned to normal. But beneath the surface, Kenyan leaders have been left with a tough decision on how to proceed.

Previously, every time a major attack by the armed group al-Shabab happened on Kenyan soil, the east African country responded by carrying out air attacks in neighbouring Somalia.

Security forces would also carry out security sweep in Eastleigh – a mainly Somali suburb in the Kenyan capital.

But this time – because most of the attackers are Kenyan nationals unlike in previous major attacks – the incident has taken the government by surprise.

For the first time, a Kenyan national carried out a suicide attack on Kenyan soil.

There is no love lost between Kenya and the al-Qaeda-linked armed group. Nairobi sent its troops into Somalia in 2011 to fight it.

Al-Shabab lost a string of towns to Kenyan and Somali troops. With that went lucrative revenues the group used to collect from these towns.

As a result, the group said Kenyans are a legitimate target.

Kenyan officials know they have to beef up security to prevent future attacks by the group. But how to do that is the burning question.

Public spaces in Kenya are often guarded by unarmed private security guards. They are the country’s soft underbelly.

The government has said it will issue firearms to the private security guards. But with al-Shabab now using Kenyan nationals to attack Kenya and deploying their weapon of choice – suicide bombers – it is a tough task if not impossible for any security guard to prevent such an attack.

Also, with al-Shabab seeing every Kenyan as a target to be killed, will Nairobi be able to send armed guards to every school, hospital, club, parks and churches?

For a developing country with many economic challenges, it is an impossible task.

Al-Shabab has previously attacked a university and several churches in Kenya. The rebel group said it will stop attacking Kenya if Nairobi pulls its troops from Somalia.

But it is hard to see that happen as it will be viewed as a victory for them.

For now, the game of cat and mouse between Kenyan security forces and al-Shabab continues with no sign of an end anytime soon. 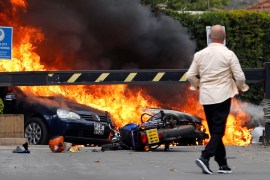 Survivors describe the al-Shabab attack on a hotel and office complex that killed 21 people. 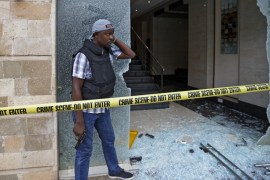 Why is Kenya an al-Shabab target?

Al-Qaeda-linked group has carried out more than 20 attacks in Kenya in the past five years. 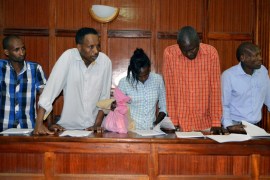