London, United Kingdom – It’s 6:15am on a dark, rain-soaked Saturday morning and the traders on Dalston’s Ridley Road Market are busy setting up. The Afghan butcher from Jalalabad brings his knife down across a hunk of goat meat as Frank Sinatra’s Winter Wonderland blares from cheap, tinny speakers behind him.

Nearby, a Mongolian man hangs children’s toys from a striped blue tarpaulin as it flaps and flails in the wind.

At the market’s north entrance, the last of the Friday night revellers stagger home in the cold as a thin line of traffic sprays through the rain towards Shoreditch, Liverpool Street and London’s “Square Mile” financial district.

Ridley Road Market has been an East London institution since the late 1880s, encapsulating the area’s rich history of immigration and cultural diversity – sometimes being at the forefront of it, as it was in 1947 and 1949 when it was the site of clashes between Oswald Mosley-led fascists and the Jewish anti-fascist 43 Group.

The market’s traders and customers have shifted with the decades.

But doubt has recently been cast upon the market’s future after traders within Ridley Road Shopping Village, the covered section of the market, were served an eviction notice.

Those evictions were cancelled after a petition by traders and local residents gained more than 9,000 signatures, and a local solicitors’ firm is currently representing some of the building’s traders in confidential discussions with the building’s management company to ensure greater clarity over their new contracts.

‘They don’t need me. They don’t even know I’m here’

Mohammed Barry has been a trader at the market since 2006, relocating from the main thoroughfare into Ridley Road Shopping Village in 2009.

“We never had any information that this building was going to close,” says the 51-year-old, who is originally from Guinea in West Africa, as he scrambles to pull a cluster of handbags down from their hooks and out of the rain.

Barry’s shop is a long storage unit that opens out onto the street. His stock of brightly coloured backpacks, scarves, dresses and belts are arranged across folding tables and hang from a tarpaulin roof.

Although the eviction was averted, Barry says the confusion and hearsay that the Shopping Village is now closed has wrecked his business.

“My business is completely down. It’s finished. Seventy-five percent of my profit has gone down because of [people] saying the place is closed,” he says, jamming his hands into his pockets and shivering in the cold.

Barry came to the UK in 2001 and lives just five minutes away from the market. Most of his customers are locals he’s known for years. But they’re becoming thin on the ground; a result, he says, of the luxury high-rise developments on nearby Dalston Lane.

“That new development made me lose 50 percent of my customers,” he says. “I used to be busy, especially when it comes to November and December …. [But] people that live in those luxury places, they don’t need me. They don’t even know that I’m here.”

As he talks, a Jamaican man walking with a cane passes by, dropping him 10 British pounds (about $13) for a thick stack of DVDs before moving on up the road.

“Twelve of them used to be 30 pounds (about $38),” explains Barry. “Now it’s 10 pounds. I’m losing 20 pounds. The reason why is that the community has split off. People that normally used to buy from me, they are no longer in this area. They’re gone.”

Over the past 20 years, house prices have risen more in Hackney than in any other local authority in the UK, according to a 2018 report by estate agents Cushman & Wakefield.

The average price of a flat has risen by 568 percent, with Hackney’s inflation rates far exceeding those in affluent areas of the capital like Kensington and Chelsea, which rose by 421 percent.

However, a recent needs assessment by Hackney Council stated that 28 percent of the borough’s children live in poverty, coming from families whose income is less than 13,728 pounds ($17,253) a year, making it the borough with the fourth-highest rate of child poverty in London.

On Ridley Road, the disparity between commercial development and community interest runs deep.

“They’re trying to destroy the whole area and take it over because they have millions of pounds to invest in big places for people which have nothing to do with the area,” says Barry, gesturing to the slew of luxury high-rises punctuating the skyline just beyond the stalls.

“In the morning, all you can see is bikes riding towards the city. And at 7:00pm, riding back to their places. They have nothing to do with this place.”

Five minutes from the market and its patchwork of traders, the scene is very different.

Inside the warmly lit cafes built into their bases, thirtysomethings work on laptops, sip macchiatos and tap at smartphones.

By 2:00pm, the rain is coming down hard. A steady stream of people passes through Ridley Road Market but few stop to haggle with the traders amid the downpour.

In a small shop the size of a one-car garage, Beatrice from Togo sits at a sewing machine, running stitches across a gold and white dress.

She grew up an orphan and is unsure of her real age, although she thinks she’s in her mid-40s. She asks that her surname not be used. The Balafon music and warm, bright vocal rising over the clatter of the sewing machine is hers and she’s shooting a music video to accompany it in Oxford Circus tomorrow.

“I suffered a lot by living with people who treated me like a slave,” she says, turning the dress to stitch its armpit. After crossing the Sahara Desert by foot in 1999, Beatrice settled in the Netherlands where she married and became pregnant.

“My baby died of medical negligence,” she says pulling up her t-shirt to reveal a dark gash across her stomach.

Soon after, she moved to the UK. In 2003, she became a British citizen.

In London, she studied fashion and now trains local women and girls who can’t afford to attend university in dressmaking. She also remotely manages a school she opened for orphans in Togo called Star of the New World. It houses 32 children, and Beatrice works part-time as a cleaner at London’s Victoria Station for extra cash that she sends back to pay for the school’s equipment.

The door opens to another blast of rain and she’s joined by a woman in her early 20s who takes her place at a sewing machine. Moments later, three Nigerian women arrive to try on wedding dresses, huddling intermittently by a portable heater.

Beatrice took on the lease of her shop last year but says times are tough. She is late paying her rent for the space and has been awake all night after her landlord texted her demanding her monthly balance of 975 pounds (approximately $1,225) be paid immediately. She doesn’t have the money and doesn’t know what will happen after the weekend.

“I want to leave the market. It’s bad and I’m tired and I’m struggling. You can’t make money here,” she says examining a hem stitch. “I still laugh, so people think everything’s OK. Nothing is OK. I am suffering and smiling.”

‘This used to be the best market in London’

Outside, the downpour has turned torrential, the sky shifting from flat grey to a dark, muddy blue. The wind blasts across the stalls as crowds dwindle.

As the traders begin to pack up, Barry Lambert, 64 – one of the market’s longest-standing traders – scoffs at the weather as he prepares to head home.

“Normally [in] December, you’d be buzzing, but the last few years it’s been dying,” he says in a thick Cockney accent as he piles his stock of yams, plantain and cassava into plastic crates.

Lambert was born in Hackney and grew up around the market after his father became a trader here after World War II.

He’s been working at his stall for 40 years and is due to retire soon. He blames the area’s rising rents and the subsequent exodus of the local community for the market’s decline.

It’s an overhead many struggle to afford in times of austerity and inflated living costs, where remaining customers have less money and stalls struggle to compete with the no-frills supermarkets just a short stroll away.

He says he’ll miss the relationships with customers and the other stall holders: the Italian and his Polish wife who run the coffee shop behind him, his Indian neighbour from Rajasthan with his watches and electrical goods, the Russian selling Indian sari fabrics from the covered shop in front, the Afghan fishmongers, the Nigerian bakers.

“This used to be the best market in London. When you walked down the street you had to walk sideways. Now, they’re killing it.”

To those who live in them, they are Europe. Watch them tell their stories in This is Europe. 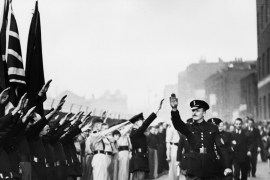 Remembering the Battle of Cable Street

The day East London stood up to the far-right and took on Oswald Mosley’s Black Shirts. 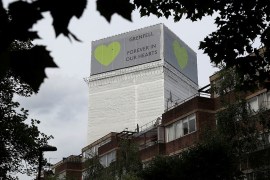 For those who cared for the living and the dead after the Grenfell Tower fire, the struggle for justice continues. 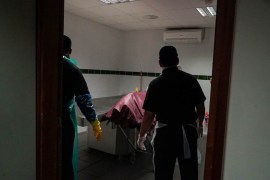 The Muslim undertakers of East London

A glimpse into the history of South Asian migration to the UK, through the work of a Muslim funeral business.