Cambodia ranks as one of the world’s most corrupt countries – but after an extensive forensic investigation, Al Jazeera found that corruption stretches far beyond the country’s borders, all the way to Australia.

Hun Sen’s family was shown to have links to more than 100 companies across all sectors of the economy including tourism, agriculture, mining, electricity and the media as well as affiliations with top international brands.

The family’s combined wealth is estimated to be anywhere from $500m to $1bn.

Kem Ley, a popular Cambodian social commentator and fearless critic of the Hun Sen government’s corruption and nepotism, went on radio calling for a full investigation into the family’s business interests.

Two days later, he was shot in broad daylight in a Phnom Penh cafe.

It was his death that started 101 East on a journey to investigate the hidden wealth of Hun Sen and the ruling party elite.

Threats of violence and death

The Cambodian diaspora was our first port of call. Australia’s Cambodian community is tight-knit, but also deeply fractured across political lines.

Various members told us what they knew about the property and business interests of the Hun Sen family and Cambodian government and military officials in Australia. They also raised more serious allegations of criminality among the ruling party elite, including money laundering, exploitation and drug trafficking. All clearly warranted close scrutiny.

Getting detailed information though was tricky and time-consuming. Many Cambodian expatriates are too frightened to talk, fearing reprisal from suspected criminals linked to the Cambodian People’s Party. They also worry their families back home could be targeted.

It was shocking to discover so many who fled the murderous Khmer Rouge now feel threatened and intimidated thousands of miles away from the increasingly repressive Hun Sen government.

Critics say those fears are well-founded with those who speak out against the government receiving threats of violence and even death.

It’s not surprising then that many within the Australian Cambodian community would only talk to us in confidence, with a guarantee of anonymity.

But, extraordinarily, ruling party insider, Kalyan Ky, was prepared to speak out about the corruption she says she witnessed during her time as an adviser to the Hun Sen government. She says she naively thought working with the government would help build trade between the two countries for the benefit of everyday Cambodians.

But she said she came to believe the ruling party relied on illicit activity and a patronage system for its survival. Disillusioned, she pulled away from her involvement with the Cambodian government.

The Australian government confirms Kalyan Ky complained to its officials about visa fraud and the illicit activities of the Cambodian ruling party elite in Australia, including alleged money laundering through properties and businesses.

But it refutes her suggestion that it turns a blind eye to criminality in order to maintain a harmonious relationship with Hun Sen.

When the Hun Sen government was accused of targeting the country’s independent media by slapping them with tax bills in the millions, sources in the Australian Cambodian community turned the spotlight on the country’s Director General of Taxation, Vibol Kong.

Having studied accountancy and worked in Australia before returning to Cambodia in 1993 to take up senior government positions, Vibol Kong is well known within the community.

A source alerted us to a 2014 Supreme Court case in which Vibol Kong sued his then-business partners for misappropriating almost $1m he’d transferred into an investment trust. This trust was set up to buy a property worth more than $17m.

Even more alarming is the fact that two of his partners in the investment trust had defrauded the Australian tax department of more than $1.8m and were suspected of hiding and laundering more than $15m.

Furthermore, with an official salary of less than $1,000 a month, how was Vibol Kong able to transfer such a large amount into the investment trust? And how was he able to afford legal fees of more than $40,000 and first-class airfares worth almost $15,000 to attend the court hearing, as documented in his own affidavit?

And this wasn’t his only deal – he appears to own millions of dollars worth of property in Australia’s southeastern city of Melbourne.

In Cambodia, Vibol Kong is very well-connected. He’s a member of the ruling party’s elite central committee as well as a patron of Hun Sen’s niece, Hun Kimleng’s, prominent law firm and a close friend of her husband, Neth Savoeun, the head of Cambodian police.

Four studio quality video cameras, fully crewed, were ready to film our interview when we arrived – not to mention more than half a dozen security cameras strategically located on the ceiling, and then there was a brigade of personal assistants.

Prior to travelling to Cambodia, I contacted former Phnom Penh Post reporter, Jack Davies, who was also looking into Vibol Kong’s affairs.

He says it wasn’t easy working as an investigative journalist in Cambodia.

“There were times when we worried we might have pushed too far – a tycoon’s lawyers would deliver a letter threatening prosecution to our editor, or worst of all a source would get hauled before the country’s notoriously corrupt judiciary on trumped-up charges. But through it all, we – and our rivals at the Cambodia Daily – kept pushing out important journalism with honesty and integrity,” he says.

When news broke in early September that the Cambodia Daily was being forced to shut down after receiving a tax bill of $6.3m, he began digging into the Cambodian company registry.

Through cross-checking Vibol Kong’s home address on his official government website with Cambodian company data, Davies discovered the director general of taxation had relatives linked to the country’s fourth-largest petroleum company living at his home.

Although the company was incorporated in 2008, according to the country’s online company registry it had not registered with the tax department until March 2017.

“How could he claim to impartially adjudicate the tax affairs of a large corporation run by his own family out of his own home?” Davies asked.

When we asked Vibol Kong about his family’s company, he claimed the records were wrong. He said his family had sold the company years ago, though he couldn’t remember when, and that he’d never had anything to do with it.

But, interestingly, he knew enough about it to insist it had been registered for tax earlier than the Cambodian company registry stated. According to Vibol Kong, those records are wrong too.

And it seems Australia’s official company and property registries, like those in Cambodia, are also wrong when it comes to his financial dealings.

For the man setting financial rules in Cambodia, questions about his own accountability remain to be answered. 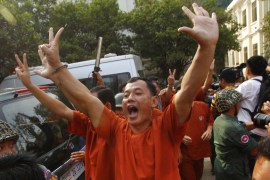 101 East investigates the suspicious murder of a political activist in Cambodia. 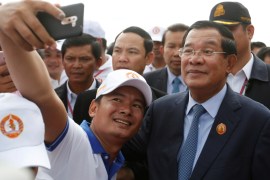 What’s behind Cambodia’s crackdown on the opposition?

Cambodia’s supreme court disbanded the country’s main opposition party on Thursday. Hun Sen, 65, is one of the world’s longest-serving leaders, first taking office as prime minister of Cambodia in 1985. Rights groups say hundreds of opposition figures, journalists, trade union leaders and others have been killed in politically motivated attacks during his time in […]