Take a breath. Forty-eight of the 64 games at this World Cup have been played in just two weeks, a whirlwind of a spectacle. There is, mercifully, a day’s rest for us all and then, in the blink of an eye, the round of 16 and quarter-finals will winnow the remaining teams down to four.

The imagination is drawn, irresistibly, to the fortunes of those left standing, the unfolding stories of progress and hope; but first take a moment to contemplate the meaning of defeat.

Some sides will be going home with a spring in their step: Peru and their fabulous travelling fans got the pleasure of comfortably beating Australia 2-0; Iran who bravely slugged it out with both Portugal and Spain return home to a nation where, finally, men and women, got to enjoy them together; South Korea came alive and fashioned a gift for the global football community, sending the Germans home before the knockout stage for the first time since the Second World War.

Mexican delirium and conviviality towards South Koreans in Russia, and at the gates of their embassy in Mexico City, has been a rare and cosmopolitan encounter.

Others will be feeling less celebratory. Tunisia are perhaps the most unloved team in their own country. In 2015, local paper, Le Temps, reported that only 3.9 percent of the population actually supported them. This startling fact is a product of the team’s long association with, and manipulation by, the brutal Zine El Abidine Ben Ali regime, finally deposed in 2011.

It is a connection that the national team and the football association has found hard to shake.

Indeed, as recent governments have made the records of the Ben Ali regime public, the entanglement of football and politics and the continuing presence of corruption and embezzlement has eroded public goodwill even further.

In any case, as the local saying goes, after six years of political turmoil and deeply disappointed hopes for change, “Tunisians do not dream anymore”. The team, knocked out after two games, further failed to inspire its countrymen.

Egypt, graced by the brilliance of Mohamed Salah, did dare to dream, and the fall has been all the sharper for it. Three defeats in themselves are bad enough, but the Egyptian Football Association (FA) has unforgivably failed the nation by allowing the squad, and Salah in particular, to be overwhelmed by the unwanted attention of politicians and celebrities.

First, the Egyptian FA took the squad to Chechnya to train, and then abandoned Salah when he was awoken in his hotel and ‘invited’ to come to the stadium for a photo shoot with the Kremlin’s point man, president of the Chechen republic Ramzan Kadyrov – a strongman with a truly dismal record on human rights, LGBT rights and torture.

Salah and the squad didn’t look too pleased about the official dinner that they also had to attend, during which Kadyrov awarded Salah Chechen official honours. His thoughts on the 100kg birthday cake, garishly iced in Chechen and Egyptian colours and delivered to his hotel, are not known.

If it wasn’t serial human rights abusers disrupting the camp, it was Egyptian celebrities, actors, and hangers on, invited by the Egyptian FA to mingle with the squad.

Rumours that Salah would retire from the national team have been widely circulating in the press, but perhaps he will await the outcome of the investigation into corruption and mismanagement at the Egyptian FA that the Egyptian parliament is readying for their homecoming.

Correlation is not causation, but one cannot help but compare the 2014 champions who returned to a Germany, still secure as first among equals in Europe under Angela Merkel’s seemingly unassailable chancellorship, with the 2018 side, which is returning to a Germany in which both of those notions are in question.

The multi-ethnic make up of both squads, seen as a great strength in 2014, is now, on the other side of the 2015 migration “crisis” and Germany’s acceptance of over a million refugees, being seen as a weakness.

Already, on the social media accounts of the German far right like the AfD, Mesut Özil, like Mario Balotelli after Italy’s disastrous 2014 World Cup campaign, is being set up as the villain of the piece.

Many Serbs are dealing with their defeat by interpreting the team’s short and unsuccessful tournament as another example of the way in which the country is unfairly treated by the world and accorded near pariah status: first, they argue, because of the decisions made by the German referee in their game with Switzerland; second, because of FIFA’s light punishment of the Kosovar-Swiss players – Xherdan Shaqiri and Granit Xhaka – who made Albanian eagle symbols after scoring against Serbia; and third, because the Croats, caught singing nationalist songs in their dressing room, have not been punished at all.

All true, and all completely oblivious to the abuse meted out by Serb supporters to the Swiss players and the presence in Russia of Serbs wearing Ratko Mladíc – convicted war criminal – hoodies and T-shirts bearing a map of Kosovo and the words “No Surrender”.

Sporting tournaments are cruel. Over the next two weeks there will be only one champion who will have great story, about a version of their best selves, to tell the nation and its grandchildren.

But the way the rest deal with defeat, and the stories they bring to fashion – from the resigned fatalism of the Tunisians to the ethnic finger pointing of the German right and the self-serving delusions of the Serbs – will be uglier but infinitely more illuminating and interesting.

For more of David Goldblatt’s insightful and incisive commentary on the world of football, listen to Game of Our Lives from Al Jazeera’s Jetty Studios. The podcast airs twice-a-week during the World Cup. Subscribe now! 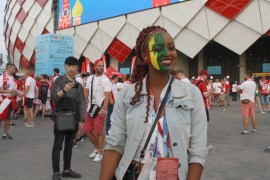 Why fans of non-competing countries love the football World Cup

Fans throng stadiums in Russia despite their teams not being part of the tournament. Al Jazeera asks them why. 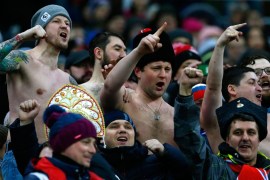