There are approximately 20 people displaced every minute as a result of conflict or persecution. This is according to r ecent figures from the United Nations that put an unprecedented 65.6 million people worldwide in the category of forcible displacement.

In 1972, Rupal Rajani and her family became victims of one of history’s most blatant displays of cultural prejudice on the African continent.

Then Ugandan President Idi Amin ordered the expulsion of the country’s Asian population, displacing tens of thousands from the place they called home.

Merely a child when they left Uganda, Rajani recalls a confused childhood in the UK, conflicted family memories and her return to a country she still somewhat considers home.

This is her story in her own words:

I was only two years old when we had to leave Uganda. We lived in Kakira, which is a huge sugar plantation. There was my mum and dad, my grandmother, my brother and two older sisters, with me being the youngest. I don’t actually remember much, but I’ve heard many stories and I’ve been back to Uganda a couple of times.

My dad was about 14 years old [when he moved from India to Uganda]. He wanted to be a doctor originally, but my grandfather died when he was just seven months old. After that, it was just my grandmother and him, so he decided to go to Uganda to try and find work to better his life.

He ended up doing odd jobs, selling whatever he could on his bike. He worked his way up to the point where he was working for one of the richest Asian families in Uganda as an accountant. He also ran their store.

My family was happy in Kakira … They had a community, they were settled, they felt like they belonged. Life was good, and it was a huge shock when people were asked to leave.

Expulsion: From Kakira to Leicester

In 1972, Idi Amin announced that all Asians had 90 days to leave the country. A lot of people were wary and I think people did have an inclination of something going on when Amin came to power, but it was still a big shock when it happened.

We moved, obviously.  The UK had set up army camps for Ugandan Asians and that’s where we were for a few weeks.

Eventually, we ended up in Leicester with thousands of other Asians.

Of all the places in the world, why Leicester? Because we had heard of it. Leicester city council, back in the day, had put out an advert in a Ugandan newspaper discouraging people from going to Leicester. Ultimately, people had heard of the city and it sort of backfired.

We had relatives that had settled there previously for work, so we ended up renting a property from an uncle until we got our own house.

The only conversations we really had at home were about, “Uganda was fantastic. We miss this about Uganda. We miss that about Uganda” but we never really, certainly not in my younger days, talked about what exactly happened.

As I grew up I wanted to know more about the expulsion of Asians from Uganda, but I didn’t really question it until I was much older …. It really wasn’t part of my life in a lot of respects. I couldn’t relate to it personally. All I knew was families talking about their memories and how wonderful life was in Uganda.

The only conversations we really had at home were about, 'Uganda was fantastic. We miss this about Uganda. We miss that about Uganda', but we never really talked about what exactly happened.

The first time I went back to Uganda was a bit of a culture shock in the sense that the stories that I’d heard from my family were completely different from the reality I saw.  I don’t know whether it’s because when you leave somewhere, people reminisce; they see things through rose-tinted glasses.

They said there were lots of Asian people around. There was lots of integration, the place was bustling, the weather was fantastic.

What I found when I got there was that people in Uganda are still quite angry at Asians because of the way they felt they were treated by the Asian community. It was always whites at the top, Asians next, and black Ugandans were treated like second-class citizens in their own country.

If you go to the rural communities, the average Ugandan still holds quite a lot of anger, but there are others that have moved on and are trying to make a difference – saying, ‘it’s our country now. We’re trying to rebuild it.’

There’s lots of investment from China now. Things are moving, things are changing. I think there’s more equality. A lot of Asians who returned to Uganda have changed their attitude … and the “newer” Asians are just trying to fit in and are not quite aware of the racial tensions that existed back in the 1970s.

When I went back that’s when I realised that my family saw life in Uganda very differently. My parents didn’t see that racism. They were there and they were getting on with what they were doing on the sugar plantation. This was just how things were. White people on top, then us, and the black people were the ‘servants’.

Although there was resentment, I don’t think my parents realised how one man [Idi Amin] who suddenly had a dream and wanted to get rid of all the Asians was quite reflective of the community that they lived in.

People are still quite angry ... It was always whites at the top, Asians next, and black Ugandans were treated like second-class citizens in their own country.

Life was very different for my dad in Leicester.  He lost his status, if you like. He was something over there, and here … I can never remember him working because he was a lot older.

That being said, I think the one thing about Asians or Indians, particularly from Uganda, is that they are resilient. They will do their best to fit in to the circumstances that they’re given, and they will make the best of it.

If you look around Leicester, they are the ones that are running businesses and a majority of the restaurants, and are more affluent because they worked really hard.

They haven’t sat back on their laurels and said, “What are we going to do?” The majority have really excelled in their lifestyle since coming to this country. 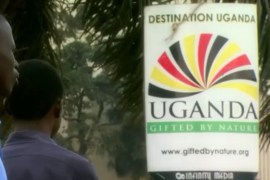 The story of how Idi Amin ordered his country’s Asian citizens to leave. 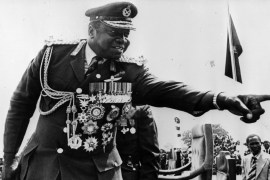 An insight into the life of one of Africa’s most notorious leaders through the eyes of people who knew him and met him.