The Trump administration has declared war on MS-13, a criminal gang based in the US and Central America, with a long history of violence in the US. Though the gang has been around for decades, federal law enforcement agencies have been given sweeping new powers to arrest and deport gang members – spreading fear in Latino communities.

In 2017, after a string of MS-13 killings in Long Island, New York, Immigrations and Customs Enforcement (ICE) began partnering with local police to identify and detain suspected gang members.

They carried out a series of raids, arresting hundreds of people – deporting some, and holding others in detention for months, without a hearing, or any evidence of a crime in some cases.

And while some have been released, they’re still living in fear of deportation. So is the “war on gangs” really about MS-13?

Fault Lines travelled to Long Island, NY to examine how the Trump administration is using the fear of one gang to crack down on entire immigrant communities.

In the following account, two teenagers trapped between gangs and laws talk about their daily struggles and the impact of Trump’s MS13-crackdown. We also hear from a lawyer and a former police commissioner.

Felix: ‘It feels like we are in El Salvador now’

Felix is undocumented in the US and has asked us to protect his identity. He says he fled El Salvador four years ago to escape death threats from MS-13. But soon, he realised MS-13 was also at his new school.

“I was happy [when I arrived in the US]. I almost cried. I was so happy to be in a new country. I was happy to see all of this. But I didn’t know what’s coming.

“The first day that I went to school, I was expecting to get somebody else, not even from my country, who too speaks Spanish, who took me with them and said, ‘You know what, I’m going to take you, I’m going to show you where you have to go.’ [But] they don’t care.

“[I know gang members here] but I just know them, I don’t talk to them, and I don’t do anything with them. I don’t want to be part of that.

“I wouldn’t wear a blue shirt, red shirt, not even Nike Cortez [to make sure I am not associated with a gang]. No. No shorts. If the police see you with that, they will stop you. And that’s not fair.

“It feels like we are in El Salvador now.

Juan: ‘You’re afraid of going outside’

Juan is a 17-year-old teenager who migrated from El Salvador in 2014. Hundreds of thousands of these minors have fled Central America in recent years, often to escape gang violence. He’s undocumented and asked us to protect his identity. In May 2017, he was stopped for a small traffic violation and then was accused of being a gang member. Police handed him over to the ICE and he was detained in a high-security juvenile detention centre. He was released six months later.

“My mum left me [in El Salvador] when I was young, like three years old. When I was 14 years old, my mum gathered the money and sent for us.

“I came here (to the US) because supposedly there weren’t any gangs. It was supposed to be calmer, different, nothing to do with gangs. You never know what they could do.

“[I was stopped by the police] Then, they told they have to take me to the police precinct to verify my name.

“I told them I wasn’t a gang member and didn’t know any gang members. Then, they told me they didn’t believe me and I was some sort of gang member.

“I was asking myself why they are going to deport me, what do they think? Because I knew immigration was coming for me, especially with how things are. I was praying to God that nothing bad would happen.

“When I arrived [at the detention centre], everything was different. It was worse than jail, because you’re locked up in there. You don’t leave at all, not even to see the sun, you’re just locked up.

“Truthfully, I felt alone, with no one to console me or anything like that.

“I still feel sad. Everything I went through, you don’t forget about it easily.

“I usually don’t go out alone … You’re more afraid of going outside, of being detained. You don’t feel the same like before, like being free.”

, everything was different. It was worse than jail, because you’re locked up in there. You don’t leave at all, not even to see the sun, you’re just locked up.”]

In 2017, dozens of unaccompanied minors – allegedly affiliated with gangs – were detained for months without a court hearing. Paige Austin was one of the attorneys that worked on a class action lawsuit filed by the American Civil Liberties Union that forced the government to bring the minors in front of a judge.

“They were disappearing into the immigration detention system, and it often took parents days or weeks to even figure out where they were, much less to get them released and brought back home.

“And then, the second thing that was very disturbing was the lack of evidence to support the allegations that the government was making.

“Many of the symbols or the items that the government claims are signs of gang affiliation are, in fact, religious symbols, or they’re signs of cultural pride.

“If they were suspected of committing a crime, the police would arrest them, and they would be in criminal custody. The fact that they’re in immigration custody means that local authorities were looking for some other way to detain them in the absence of any evidence of wrongdoing.

In February 2018, the NY Civil Liberties Union filed a lawsuit that challenges the prolonged detention of immigrant youth by the US government. This includes undocumented youth who are not unaccompanied minors swept up in the MS-13 crackdown. Austin is the lead lawyer on this case.

“LVM (one of the detained minors) had, in April of 2017, been suspended from Bellport High School for extending his middle fingers at another student. The school alleged that that was a gang sign and they suspended him.

“He’s never admitted to being in a gang, and he’s never had any contact with the Suffolk County Police Department. He also does not have a single tattoo anywhere on his body.

“The immigration judge, to whom this evidence was presented, rejected these allegations and concluded that he did not pose any danger. And yet, he remained detained.”

Timothy Sini: ‘We are not targeting undocumented residents’

Timothy Sini is the former Suffolk County Police commissioner who is now district attorney. He is a Democrat who’s been criticised for working closely with ICE under the Trump administration.

“Since September of 2016, we’ve made over 320 MS-13 arrests with over 220 individuals … They’re confirmed gang members. But keep in mind, whether they’re gang members or not, these are criminal arrests that we have to then go to court, open court, and prove criminal charges against.

“But in the instance where we have reliable, credible intelligence that someone is an MS-13 gang member and they’re in our country illegally, we will – and we’re not in a position to bring a significant state charge or bring a federal RICO charge, we’ll work with the Department of Homeland Security to detain them, and for Department of Homeland Security to commence removal proceedings against them.

“It’s very important that folks in the community know that we are not targeting undocumented residents; rather, we’re targeting gang members, and we will provide protections to folks who have no immigration status whatsoever. And we’re not going to not work with our federal law enforcement partners to target MS-13. To ask us to do otherwise is reckless.” 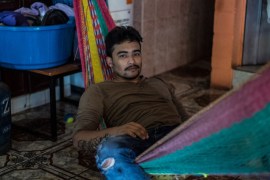 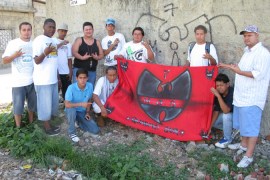 A 70-year-old former nun is using grandmotherly love to transform some of Ecuador’s toughest streets.