If Thailand’s canal is ever built, it won’t be the world’s longest, but it surely will claim to have had the longest gestation period.

The idea of building a shipping lane from one side of the country to the other, linking the Gulf of Thailand, or Gulf of Siam as it was known at the time, with the Andaman Sea and Indian Ocean, was first proposed by King Narai in 1677.

Obviously, it didn’t happen at the time. Throughout the centuries, however, the idea has repeatedly been brought up by monarchs, politicians, soldiers and businessmen, and, each time, the plans have been shelved because they’ve been deemed impractical, too expensive or detrimental to the nation’s security.

Now, in 2018, the proposal is back, thanks to a group of businessmen, former politicians and retired military generals who believe the time is right for the Thai government to commit to building the 100km canal.

The idea is to shorten journeys for ships travelling from, for example, Europe and China. At the moment, those ships have to travel through the dangerous and congested Malacca Strait, often stopping in Singapore to refuel or unload along the way. The Thai canal would cut more than 1,000km off the journey.

So why now? There are two, possible answers to that question, and the main one can be found in who is in charge in Thailand right now.

Since a coup in 2014, Thailand has been under military rule. The generals enjoy ultimate power to make decisions about projects, without having to be concerned about democratic processes and constituents staging protests, although that has happened in a handful of cases since the coup, and could happen again if the canal plan starts to gain some traction.

There are concerns from environmental groups about what effect the project might have on some areas where ships would pass through.

The current backers of the canal openly admit that it would be easier to push it through under a military government than a democratically-elected, civilian one.

So far, the Thai government has shown no interest in even agreeing to conduct a feasibility study, let alone sign off on the $30bn, but supporters of the idea hope to use economics to convince the country’s Prime Minister, General Prayuth Chan-ocha.

“He has to come to the understanding that this is the project that will stimulate our economy faster than any other project that we have right now,” said Pakdee Tanapura of the Canal Study Team.

One of the concerns for the prime minister is the location of the canal. There are several, proposed sites, but the favoured one sits just above the three southernmost provinces, where armed Muslim groups are fighting for independence from predominantly Buddhist Thailand. The canal could create a border between the south and the rest of Thailand, thus emboldening the claim of the separatists.

The second answer to the question about timing lies in China, where the supporters of the canal have close ties. They’re trying to take advantage of Beijing’s Belt and Road infrastructure initiative that aims to improve transport and trade routes between China, the rest of Asia, Europe, the Middle East and beyond.

The Chinese government and private companies are pouring billions of dollars into mega-projects, like a high-speed train line that will run from Yunnan Province in southern China to Laos and Thailand.

The canal could conceivably fit into Chinese President Xi Jinping’s grand plans to build a new Silk Road, but while there is some interest in the project from private enterprise in China, there is none from the government.

At the moment, Thailand’s canal is still just an idea, albeit one that’s been centuries in the making. 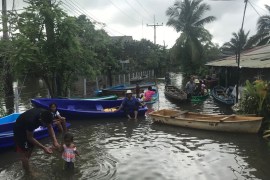 With yet another flood hitting southern Thailand, villagers point to decades of inaction by consecutive governments. 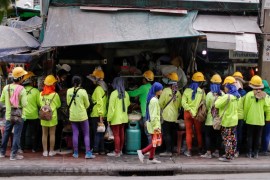 Workers return to Myanmar and other countries after government vows to crack down on unregistered foreign labourers. 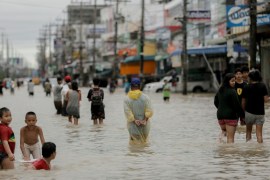 Heavy downpours and flooding ravages southern provinces with more than 700,000 affected over the past week.