Israel took control of the West Bank after the Six-Day War in 1967 and sanctioned Jewish settlers to set up homes throughout the area, who have occupied it ever since. Today, the occupied West Bank is home to two-and-a-half million Palestinians; it’s an integral part of their homeland.

There are constant hostility and frequent violence between settlers and Palestinians.

In the following account, filmmaker Fatima Lianes provides a personal insight into the making of her film and the issues behind it.

Before embarking on this film, I had last visited Israel in 2007. I hadn’t known it then, but that trip would be the key to making Thou Shalt Not Kill, 11 years later.

When I first met Itamar more than a decade ago, he had just resigned from the Israeli army after years of leading military operations in the occupied territories.

He had told me that, as a child, he’d never imagined he could kill someone, let alone have the desire to kill them. But, as a soldier, he had killed – and that tore him up. So much so that he’d contemplated committing suicide.

He recalled a particular night when he’d entered a Palestinian village to arrest an “alleged terrorist” and the man’s son had stared at him intensely. He knew that look too well. It was a look of hatred – the same hatred Itamar, whose grandparents had all been killed in the Holocaust, had felt as a child towards Nazis.

He realised then that “if that Palestinian child looked at me as I looked at a Nazi, there is something that does not work, something has to change”.

From that moment, Itamar changed his life and dedicated himself to working for peace. Forgiveness – particularly learning to forgive himself – helped him to heal his wounds. Forgiveness, he taught me, is the only thing that can win over revenge.

So, when more than a decade later, I learned that I was going to make a documentary about youth and radicalism, the first person I called was Itamar.

But the call did not go as I expected. Itamar had stopped believing in peace. Things in Israel had grown worse and peace was now an unattainable utopia, he told me.

The photo of Hussein Dawabshe

A few days before I was due to leave for Israel, I received a telephone call that would change my life. My mother had had a medical emergency. I postponed my trip.

During long hours spent waiting in the hospital, between laughter, tears and family confessions, I came across a picture of Palestinian Hussein Dawabshe.

Hussein had lost his daughter, son-in-law and 18-month-old grandson in 2015, when a group of radical Jewish settlers known as the Hilltop Youth had firebombed their home in the occupied West Bank. The only survivor was Dawabshe’s four-year-old grandson, Ahmed, who had burns to more than half of his body.

The picture of Hussein had been taken at the entrance to the court where a hearing for the accused was due to take place. Young radicals surrounded him, singing about his deceased grandson: “Where is Ali? Ali is burned, Ali is on the grill.”

I suddenly knew the story I had to tell, and everything took a 360-degree turn – in my life as well as in my plans for the film.

So I found myself heading to Israel during a moment in my life when I was at my most fragile. But being close to death can give us a different perspective on life and instead of destroying me, my mother’s death gave me a certain strength: the empathy to feel the pain of a Palestinian grandfather and the determination to give him a voice.

Entering the world of the Hilltop Youth

When I landed in Tel Aviv, entering the world of the Hilltop Youth seemed almost impossible. The group is reclusive and although our fixer had tried contacting them, they refused to talk.

Our first insight into their world came through the Goldberg family, devoted followers of the late radical rabbi, Meir Kahane, and associates of the defendants in the arson attack.

Without an appointment, we travelled to their home in Tapuach, a Jewish settlement in the Judea and Samaria region. As expected, we weren’t welcome. But we decided to wait in front of their house. After a few hours, during which several people entered and left the house casting suspicious looks our way, 20-year-old Rut Goldberg allowed us to enter her home.

The hall was filled with pictures of Kahane and the American-Israeli Baruch Goldstein. Ruth looked at them with pride, while telling me how Goldstein, who was responsible for the 1994 Cave of the Patriarchs massacre, in which 29 Muslims were killed, gave his life “for his people”.

Gradually, more members of Rut’s family arrived – her father Lenny and her sisters – and we began to immerse ourselves into their lives.

Gaining their trust was a slow process that took several days, many conversations and moments of great internal struggle.

My intention was never to judge them but to listen and understand, which is difficult when a young woman is speaking proudly about the death of an 18-month-old Arab baby while affectionately hugging her two-year-old niece.

I felt angry. Sometimes I thought I was going to explode with anger. But I also felt compassion and even a certain sorrow for Rut. She was just a girl who had never had the opportunity to know a different reality. Her father proudly said that he made sure to give her “the best Jewish values”.

My intention was never to judge them but to listen and understand, which is difficult when a young woman is speaking proudly about the death of an 18-month-old Arab baby while affectionately hugging her two-year-old niece.

‘Youths lost to a lie’

Our goal of finding the Hilltop Youth continued throughout this. Every day, for hours, we went around the hills of the occupied West Bank, looking for ways to talk to them. But nobody wanted to cooperate. Some of them took photos and videos in order to denounce us on social networks.

We always returned to our hotel bereft of hope.

Then, one day, when we were about to give up, we read on social media that the Hilltop Youth were due to begin the reconstruction of an outpost demolished two weeks earlier by the Israeli army.

We decided to look for the outpost and, after hours of searching, finally spotted a small structure with a flag on it. We got out of the car and began, tentatively, to approach it.

My primary feeling was fear. If these people were able to burn a Palestinian family, what would they do to us?

It was an inhospitable, hostile place, and the Hilltop Youth hid in their little house. Our fixer approached them first and, gradually, we got closer. The flag read “God is the King”.

I expected to find “monsters” but they were just shy children who hardly ever stopped praying and constantly recited the Torah. I felt the same way for them that I had for Rut: compassion and grief for the youths they’d lost to a lie.

Revenge was the protagonist in their lives.

Slowly, these kids who devoted their lives to “conquering the hills”, started opening up – sharing their thoughts with us. We listened.

I expected to find 'monsters' but they were just shy children who hardly ever stopped praying and constantly recited the Torah. I felt the same way for them that I had for Rut: compassion and grief for the youths they'd lost to a lie.

The power of forgiveness: Meeting Hussein

Throughout this, I could see Hussein Dawabshe’s expression in that photo, but I hadn’t yet felt ready to meet him. He would be the last person I met on my trip.

After days spent with those who celebrated his tragedy, I didn’t want to be carried away by my emotions when I did finally meet him.

Ahmed’s room was full of pictures of him with his deceased mother and I could not help but cry. I had been lucky to enjoy a mother for 41 years of my life, but Ahmed would not.

We walked together to the house where his family was murdered. Hussein had decided to leave it intact so that no one would ever forget what had happened there. I struggle to find the words to express the feelings that overtook my body upon seeing it. Emptiness? Anger? None of them does it justice.

Hussein walked calmly around the house in silence and, again, the power of forgiveness appeared in my life.

How does a man who has lost everything have the dignity to get up every day, to stay alive – struggling but determined that his grandson would grow up not with the idea of revenge but of forgiveness?

After everything, and in spite of its harshness, filming Thou Shalt Not Kill has been a haven of peace and hope for me, helping me feel gratitude for my upbringing, for my family and, especially, for my mother, for the values that she taught me, for the tolerance and respect.

People say that forgiveness is capable of healing even the deepest wounds and this trip to Israel reminded me of this by healing mine too. 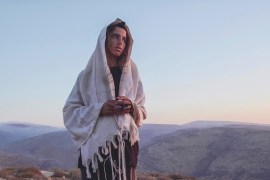 Meet the hardline group willing to do anything, including going against their government, to claim land for Israel.