By Jenni Henderson and Drew Ambrose

“They pinned me down, took my pants off, and when I tried to resist, they gave me an injection in my arm … the anaesthetic didn’t work. It was excruciating,” he recalls.

Kojima was one of 25,000 people who were sterilised in Japan under the government’s Eugenic Protection Law.

The law was introduced after World War II to prevent the birth of children who the government deemed “inferior”. This included people with physical disabilities and mental illness, who for decades have faced discrimination and isolation in Japanese society.

The Hokkaido region, where Nakae Hospital is located, has the highest number of forced sterilisations in the country.

“I remember what the nurse said clearly: ‘Mr Kojima, you have schizophrenia. You have a disability. People like you should not have children’,” Kojima recalls.

He was left physically disabled after suffering from polio as a child, but Kojima says he was never formally diagnosed with a mental illness.

He was admitted to the hospital by police when he was 18, after arguing with his foster parents over money.

While there, he says he witnessed other patients being taken for sterilisation surgery, some as young as 14 years old.

Not long after his own sterilisation procedure, Kojima escaped the hospital. But he says he couldn’t escape the shame he felt over what happened and kept his it a secret for 57 years.

“People with disabilities … we all have the right to live … They stripped us of this right,” he says.

Kojima finally revealed to his wife what happened to him after another sterilisation victim launched a case against the Japanese government.

“I hope more people will get to know there are people like us. And I hope the same thing will not happen in other countries … We have to make some noise,” he says.

When Japan hosted the Paralympic Games in 1964, the Eugenic Protection Law was still in force. It was only repealed in 1996.

In 2020, the games will be held again in Tokyo, but Paralympic athlete Hajimu Ashida questions whether the country has moved on from its history of discrimination.

“I wonder whether Japan will truly become as accepting of diversity as we are told? Will this event just come and go without creating lasting change?” he says.

Ashida bears the physical scars of a desmoid tumour, a rare disease that engulfed the muscles and bones in his right arm. It left his arm stunted with a permanently dislocated elbow.

Today, he says he fights to be recognised as an athlete, rather than someone with a disability.

“I want to compete in able-bodied athletes’ events. For me, it will mean breaking through all kinds of obstacles,” he adds.

Barriers for people with disabilities

Japan has more than seven million disabled people. This year, the government increased employment quotas for disabled people. Employees with a disability must now make up 2.5 percent of the public sector workforce and 2.2 percent in the private sector.

But Japan’s own government has not always adhered to these quotas.
In August 2018, authorities were forced to admit they had given false information and inflated the number of disabled people employed in 27 government ministries and agencies.

Only half the number of disabled people had actually been given a job.

For those who work in employment services for people with disabilities, this hypocrisy was a blow.

“The government itself is not following the regulations, even though they made the regulations. There are some people who get extremely angry about this …  Disabled people will think that they can’t work if they see this,” says Yumiko Kobayashi, director of the Tama Shurottei organisation.

In a country which classifies mental illness as a disability, Kobayashi’s organisation runs centres that help people with a mental illness learn more about their disability and train for the workforce.

“The starting point for people with mental illness is one episode, but that can be controlled with medication … But when that mental illness gets worse and you don’t get help from society, disability occurs,” says Kobayashi.

She believes it’s harder for people with mental illness to express their needs to employers because their disability is invisible, making it more difficult for them to find work.

As hiring quotas for disabled people rise, so too do the numbers of disabled workers leaving employment, Kobayashi says.

Kazuhiro Horii, a disabled job seeker at one of Shurottei’s centres, left his previous part-time job because he wanted to work full-time. He says the revelations that the government was publishing inflated employment figures for disabled workers should prompt a major rethink.

“I feel angry and sad … Because we’re disabled people, maybe they think that this is alright that this happened. I can’t forgive that at any cost,” Horii says.

In Hokkaido, Kojima says the Paralympics present the perfect opportunity for Japan to face up to its past and present discrimination, in order to move forward.

“When the games are held, it would be better if everyone, including those who are disabled, come out and fight against the way that Japan looks at people with disabilities,” he says.

“I will do my best and win this case. And then for future cases after mine … it’s clear the government did something wrong … The future generations, I have to fight for them in order for the government to apologise for what they did.” 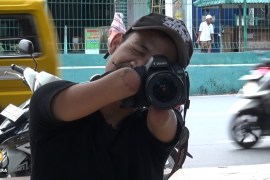 Dzoel has no hands or legs but doesn’t let that get in the way of his love of photography. Banyuwangi, Indonesia – Despite being born without hands and legs, Achmad Zulkarnain, known as Dzoel by his friends, didn’t realise he was different until he was eight years old, when children at school began teasing him about […] 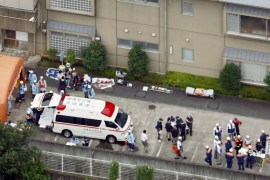 Former employee of care centre in Sagamihara arrested, reportedly saying “the disabled should all disappear”.