A bid is currently under way to create a massive Antarctic Ocean sanctuary in the vast and remote Weddell Sea. The marine reserve would cover 1.8 million square kilometres and would be protected from direct human impacts like fishing and deep-sea mining.

In early 2018, earthrise joined Greenpeace’s expedition to the Weddell Sea as a team of scientists, ocean photographers and ocean experts set out to gather sufficient evidence to ensure that the proposal is carried through and that international support is garnered.

Ben Mitchell was the cameraman in charge of cinematography during the expedition – facing extreme weather conditions, unlikely shooting environments as well as diverse physical and mental challenges.

As the 25 governments responsible for the conservation of Antarctic waters gather to consider the Weddell Sea proposal, Mitchell looks back at his time on board the Arctic Sunrise – a reminder of the lengths being undertaken to provide the world and those in power with the evidence necessary to approve the Weddell Sea proposal.

I had always wanted the chance to film in Antarctica , the “world’s last great wilderness” – home to penguins, blue whales, fur seals and starfish. So I was very excited when I was asked to join the Greenpeace Antarctica project.

But I knew the logistical and physical challenges would be myriad. It wasn’t a project to undertake lightly, and I immediately contacted a few camera operators who I knew had worked down there.

Within two days I had collated an exhaustive list of useful equipment and tips for working in harsh cold conditions. I was very unfit at the time, so I started to spend at least an hour walking every day until we were to go.

Finally the big day came when we boarded the icebreaker Arctic Sunrise – our home for two weeks.

There were showers and hot meals, but the conditions on board were very cramped. Nick Clark, Al Jazeera’s environmental editor, and I shared bunk beds in a cabin less than 1 by 3 metres. We are both well over 1.80 metres tall. It promised to be a challenge but it proved to be ok in calm seas.

When the sea was rough, however, the deck was closed and often 80 percent of the crew would be confined to quarters. The captain would announce that it was too rough to go outside and so no one was then able to get on deck for safety reasons. The all-clear would later be declared over the boat’s tannoy speaker system.

During the five days crossing the Drake Passage, only four out of 38 of us didn’t succumb to serious seasickness. I was one of the lucky four who didn’t get seasick – the captain being another but the ship’s doctor did go down. I ended up having to rehydrate most of the crew and campaign team in their bunks as most were incapacitated for days on end.

The boat was yawling between 45 and 50 degrees from vertical every 10 seconds and the wind was gusting up to 130km/h. Every 10 seconds we would go from nearly standing up to doing a headstand in our bunks.

The seasoned crew showed us how to literally wedge and strap ourselves into the bunk so we didn’t fall out. We got between one and two hours sleep a night if we were lucky.

Luckily no one fell seriously ill during our trip. We were briefed often and followed our wildlife adviser’s every word. The cameraman on the previous leg had to be medically evacuated as he’d hit his head and suffered a severe concussion from just moving about the boat.

‘Editing in a converted toilet’

Editing in a converted toilet was interesting.

A board, about one metre squared in size, was lashed to the top of the cistern for our edit suite. Every single thing had to be strapped down and bungeed to the boat. My laptop, microphones, lenses, etc. were all secured fast every second. You couldn’t leave even a battery loose for one moment.

It was challenging to edit in these conditions. It was hot, noisy and we were constantly thrown around, feeling a bit nauseous. I spent a good two hours of every day managing the media in these conditions; every hard drive strapped to the boat.

During the voyage, the two kitchen staff were amazing. The whole crew was provided with three set meals a day and they were strictly adhered to. It was a highlight of the trip that the food was so incredible. We had a chef from Goa and one from France so it was a great combination of culinary delights.

‘Filming outside was almost impossible‘

Our main challenge was filming anything on land. We needed this for the essential wildlife shots, but in the three weeks on board the ship we only managed it twice out of an attempted dozen or so landings.

This was primarily due to the sea conditions just making it impossible to launch the inflatable boats (RHIBs) from the ship and travel the half hour or more across freezing seas to any shoreline.

We often attempted it and having arrived were told it was too rough and dangerous to land or that there were too many fur seals, which have a potentially life-threatening bite, on the shore.

To get on deck and into an RHIB or to film anything outside was about an hour long process before even considering any of the camera equipment.

We had to get fully kitted up with two or three layers of thermal clothes, then a very heavy and cumbersome ‘survival suit’, life jackets, hats, gloves and massive clumsy Arctic boots … only then did we consider the camera gear.

The cameraman on the previous leg had to be medically evacuated as he'd hit his head and suffered a severe concussion from just moving about the boat.

It was difficult to manoeuvre dressed in all this gear, and we had to arrange all the camera equipment so it was accessible, waterproofed, windproofed and cold-weather proofed.

Then we had to clamber down tiny stairs and hang onto a wet rope to board an RHIB, which often was bashing against the ship and/or rising and falling about 4.5 metres every few seconds. Not an easy process.

Once on the RHIB or outside, the physicality of filming was almost impossible.

Wearing the survival kit along with headphones and gloves was essential but this made it very difficult to access any of the camera’s fiddly function buttons or even adjust the lenses focus or iris ring. All this in minus temperatures while being splashed by freezing Antarctic sea water in high winds.

Just getting my eye to the viewfinder was a major challenge most of the time.

Even having sorted the camera image out, the sound would often then prove impossible due to the wind. We would constantly have to adjust the framing and mic positions in order to get any usable sound. Close-micing under a few layers of thermals proved the best bet but not fool-proof. If speaking to anyone not on an ’embedded’ radio mic, we would always struggle.

The idea of changing a lens or changing the camera or microphone while fully togged up would always fill me with dread. Keeping the bare minimum equipment constantly accessible while weatherproofed was hard work and tiring.

I remember getting a bit shirty with Nick occasionally for no reason of his, but I couldn’t work out why it was happening. It turned out that the mental battle became as big as the physical one.

There was the mental pressure of being in such a beautiful and impressive place but not feeling I was doing it justice with my shots. I couldn’t shake the feeling and I initially felt like I needed to be shooting, anything, always, just shooting.

This was my mistake and I soon realised it.

I'd been so wrapped up and stressed about shooting amazing material that I'd basically forgotten where we were. I couldn't see the wood for the trees so to speak.

I remember after two days at sea, trying to go on deck alone for an hour with no kit, to collect my thoughts.

After 20 minutes I ran back in to get my camera. I think someone had spotted a whale or something. By the time I got back on deck with all the gear, it was long gone. This made it worse initially but I then forced the hour with no camera.

This was the turning point.

I’d been so wrapped up and stressed about shooting amazing material that I’d basically forgotten where we were. I couldn’t see the wood for the trees so to speak.

I spent the next hour just looking at the passing misty grey seascape and something clicked: “I’m here. It’s not all the gear. The lenses, the mics, the drone. It’s not that that’s important…”

I calmly went back down, and from that point on began to enjoy the journey.

I worked far more methodically and practically, concentrating solely on the decent, doable shots. Ultimately this was far more effective and I then started producing what I was hoping for.

The physicality never changed but I had overcome the mental battle which is what I had never anticipated. 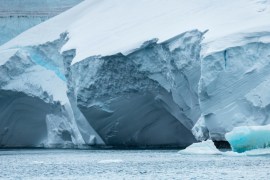 The Weddell Sea in Antarctica is the coldest sea on the planet yet is home to an extraordinary ecosystem. 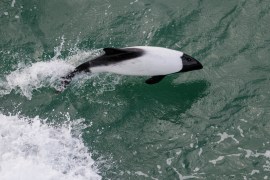 A warming climate and an ever-expanding commercial fishing industry are threatening Antarctica and its iconic creatures.