Pyeongchang, South Korea – South Korean police showed off rare and eclectic skills – from dancing and beating traditional drums, to rappelling from a roof, sniping at and taking down hostage-taking gunmen – at the launching ceremony of a police security unit for the upcoming Pyeongchang Olympics on Wednesday.

With hi-tech equipment such as explosive-detecting robots, smart police cars, smartphones developed for policing activities, and drone signal jamming devices, around 13,000 police officers will be mobilised for the Olympics, set to take place from February 9 to 27.

South Korea’s police have been closely coordinating with intelligence agencies around the world, and have put together a list of more than 30,000 people considered to be a security threat, banning them from entry into the country.

Fortunately, the police have so far received no information or indication of any major plot.

An even bigger relief to the police came after North Korean leader Kim Jong-un said in his New Year’s Day speech that hosting the Olympics in South Korea was a great event and a source of pride for the entire Korean nation and offered to help.

North Korea’s decision to send a delegation of not only athletes and coaches, but also senior officials, cheerleaders, artists and journalists has swept away the possibility of some kind of provocation or attack by North Korea and helped build up public interest in the Olympics.

It’s a stark contrast to the 1987 midair bombing incident, orchestrated by two North Korean agents, of a Korean Air flight bound from Baghdad to Seoul, which killed all 115 passengers and crew members on board.

It was later discovered that North Korea planned the bombing in an attempt to destabilise South Korea’s transition to democracy and to frighten international sports teams from travelling to the 1988 Seoul Olympics.

Ironically, for these Olympics, one of the major tasks for the police will be to protect the North Korean delegations, as some conservatives in South Korea are unhappy with the two Koreas’ agreement to march together under the unified Korean Peninsula flag at the opening ceremony and to field a joint women’s ice hockey team.

“There could be confrontations between conservative and progressive groups. I believe we can prevent [such confrontations] from happening by employing police forces on the ground in advance.” Lee Cheol-seong, head of the National Police Agency, told Al Jazeera.

Perhaps more ironically, however, the two Korea’s single ice hockey team is set to show a rare unity in the eastern coastal city of Gangneung, the same place where a North Korean espionage submarine infiltrated in 1996.

A 49 day-long manhunt resulted in the deaths of 24 North Korean agents, and 17 South Koreans, including one police officer. 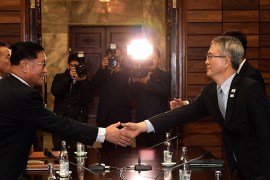 Officials from the culture ministries of rival countries hold talks at the demilitarised zone of Panmunjom. 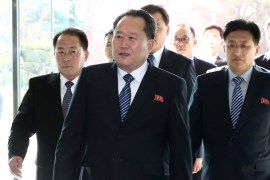 North Korea to send team to Olympics in Pyeongchang

Seoul proposes the two Korean teams march together at the Games’ opening ceremony, after rare talks. 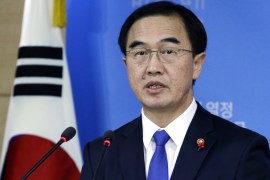 South Korea proposes high-level talks with the North to discuss bringing athletes from Pyongyang to the Winter Olympics.