Istanbul, Turkey – For decades, his image has dominated the landscape of Turkey, his icy-blue eyes staring down from the walls of every school, hospital and government institution.

Even the sleepiest of neighbourhoods has paid homage to the man, with huge bronze monuments glorifying each of his military victories.

But now, nearly 80 years after his death, the legacy of Mustafa Kemal Ataturk, the statesman who shifted Turkey from a predominately Islamic nation to a modern secular state, has been reignited, causing wide-reaching ructions over the role of religion in the Muslim world’s model democracy.

For many Turks, his achievements as founder of the Turkish Republic in 1923 from the ruins of the Ottoman Empire are sacred, years of sanitised history making him a myth Turks can rally behind.

Sener Eruygur, a former Turkish Gendarmerie Forces Commander General, has called him “the cement of the Turkish nation, who provided the Turks with hope in a time of despair”.

Our nation has an eternal respect for Mustafa. We know very well that our nation has no difficulty with the surname Ataturk, which itself gave him this surname. So, why has there been a debate about it?

A former army general, Ataturk left his mark on the military after repelling the Allied invasion of the Dardanelles and later resisting the Greek, French, and Italian armies.

Following the collapse of the Ottoman Empire, he led the Turkish War of Independence, which defeated European powers who hoped to invade the crumbling empire.

Blaming the demise of the empire partly on its religious leadership, Ataturk promoted nationalism and ancient Turkish traditions in his new state, at the expense of Islam.

His republic would make a clean break from its Ottoman past, replacing the Caliphate with secularism and turning away from the empire’s former Arab territories in favour of Europe.

Hoping nationalism would overcome the idea of an Islamic Ummah, or global Muslim community, his reforms – known as Kemalism – altered virtually every aspect of Turkish life for the next eight decades.

He pushed for women’s suffrage, banned the Ottoman fez in favour of European-style hats, outlawed the Muslim call to prayer in Arabic and enshrined secularism in the constitution.

“Nearly 80 years after his death, he remains the poster boy of modern Turkey,” says Arslan Bulut, a journalist with the opposition Yenicag newspaper.

“For many Turks, Ataturk and his ideas are the beating heartbeat of the republic. The CHP (Republican People’s Party) repeatedly mention his name and legacy on the campaign trail because they feel his legacy is under attack – Ataturk founded the political party,” Bulut told Al Jazeera.

It was not until 2002, when the religiously conservative AK Party swept to power, that Ataturk’s legacy was hotly debated in political circles – a discussion which continues in today’s Turkey.

For some, Ataturk’s reforms were problematic.

The political and legal system he left following his death prevented Muslims from exerting any significant influence in temporal affairs, with laws silencing pro-Islamic politicians.

“Several AK Party officials and their supporters blame him for the changes he introduced, which they claim amounted to repression,” says Bulut.

Since storming to power 16 years ago, President Recep Tayyip Erdogan and his governing AK Party have been accused repeatedly of trying to supplant Ataturk as the country’s most revered leader through emphasising Turkey’s Ottoman and Islamic heritage over its secular history.

Erdogan, who until last year was known for rarely uttering the word Ataturk – the sobriquet means “father of the Turks” – lashed out at the left-leaning and secularist CHP saying he would not let Ataturk’s legacy be monopolised by “fascist” groups.

In the days leading up to the 79th anniversary of Ataturk’s death, Erdogan said: “Our nation has an eternal respect for Mustafa. We know very well that our nation has no difficulty with the surname Ataturk, which itself gave him this surname. So, why has there been a debate about it?

“The answer is that those circles who favour coups, juntas, tutelage systems, and who are hostile to the values of this nation have been trying to hide themselves under the guise of Ataturkism [the term usually used in Turkey for Kemalism].”

They are against Kemalism and the aggressive secularism which attack Islam and banished it from public life, not Ataturk per se.

Yasar Yakis, a founding member of the AK Party, told Al Jazeera that since the 2016 failed coup attempt, the government no longer saw Ataturk as a divisive figure, but as a symbol of unity.

“The heart of the [AK] Party is made up of Muslims, who would love to see a more practising and religious country.

“They are against Kemalism and the aggressive secularism which attacked Islam and banished it from public life, not Ataturk per se.”

Ataturk’s portrait was hung from the headquarters of the AK Party, something that would have been unthinkable years ago, he said.

But according to the opposition, in more than just an attempt to break with the past, the AK Party has launched a brazen affront to Ataturk’s legacy.

“The AK Party wants to get rid of the Republic and wipe clean Ataturk’s legacy,”  Baris Yarkadas, an MP with the CHP told Al Jazeera.

While the government and AK Party deny that they have a hidden agenda, both have chipped away at some of Ataturk’s anti-Islamic policies with acts such as restoring the headscarf for women and restricting alcohol sales.

He has said he wants to forge a “pious generation,” with recent speeches emphasising Turkey’s Ottoman-Islamic history and domestic achievements over Western ideas.

However, he has also said the party’s religious inclinations are similar to those of Christian Democratic parties in Germany; “We are Muslim Democrats.”

Until 2016, such statements had failed to galvanise westernised Turks behind him.

But this changed on July 15, 2016, when Turks from all walks of life marched against a military coup, which ultimately failed and was reported to have been orchestrated by a shadowy Islamic organisation.

“The coup became a unifying force,” says Ali Turksen, a co-founder of the opposition IYI party.

“It was depicted as a second war of independence, with the images of flags, tanks, and martyrs plastered across the pro- and anti-government media for weeks.”

Recently, he says, Ataturk has become less a revered symbol of a shared identity among Turks than a stand-in for an ossified and out-of-touch secular opposition. 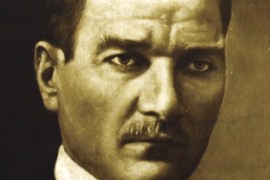 Father of the Turks