“I never ever thought I’d end up in America,” he said.

Smiling from ear to ear, Shafiq, whose surname is being withheld to protect his identity, boarded the bus to New York City.

“They asked me which city I wanted to go to and I said, ‘New York’, just because everybody told me it was amazing,” he said.

“I want to work so I can pay for driving lessons, and then I plan to drive a taxi,” he added.

Just days earlier, the 26-year-old Pakistani refugee was on flown to the US on a secretive refugee transfer from an Australian-run camp on Manus Island, off mainland Papua New Guinea.

The transfer, part of an agreement made under the administration of former US President Barack Obama, was designed to resolve an ongoing stain on Australia’s human rights record.

For Shafiq and those like him, the flight to the US represented a new start after years of being detained in deteriorating conditions on Manus Island.

Since 2013, Australia has refused to resettle refugees who arrive by boat.

Instead, those intercepted are sent to offshore detention centres on Manus Island and Nauru. The policy has drawn widespread condemnation by international rights groups, as well as the United Nations, who point to the harsh conditions of the centres.

Self-harm, suicides, and physical and sexual abuse have been documented with frequency in the Australian-run facilities.

Shafiq was one of the first 100 refugees from Manus and Nauru to begin new lives in the US as part of an agreement the Trump administration reluctantly kept intact.

“I think it is a horrible deal, a disgusting deal that I would have never made,” President Donald Trump told Australia’s Prime Minister Malcolm Turnbull in a combative, leaked conversation last year.

“I am the world’s greatest person that does not want to let people into the country,” Trump said, blasting Turnbull for making him look “weak and ineffective”.

Nevertheless, the agreement to resettle up to 1,250 of Australia’s unwanted refugees is quietly going ahead.

US officials are under no illusions of how unpopular the deal is in the White House. Australia is wary of any perceived incentives that might restart the people-smuggling trade.

But for the refugees themselves, it’s a long-awaited chance for a new life.

‘Worst experience of our lives’

The 25-year-old former detainee from Pakistan said for weeks he jolted awake from nightmares about his time on Manus.

“With criminals, they know how long they will be in prison, but we had no idea how long we would be there. It could have been for the rest of my life,” Yousafzai said. “It was a hellish place.”

For Shafiq, his new life, not far from Manhattan, offers a certain irony.

His family is from Parachinar, a city in eastern Pakistan, that borders Afghanistan’s Tora Bora region.

After the September 11, 2001 attacks in New York and Washington, DC, the US began pounding the region where the CIA suspected Osama bin Laden was hiding.

The area became a hotspot for Taliban-linked attacks. In Parachinar, Shafiq’s parents urged him to flee the country and make a better life for himself.

In 2013, the then-21-year-old travelled through Thailand and Malaysia, eventually sneaking into Indonesia and boarding a boat to Australia. In the past 18 years, more than 1,800 people have drowned attempting the same journey according to Monash University’s Australian Border Deaths Database.

With criminals, they know how long they will be in prison, but we had no idea how long we would be there. It could have been for the rest of my life. It was a hellish place.

Shafiq’s timing could not have been worse. Australia had just announced its tough new border protection policy.

Shafiq was deported to Manus shortly after his arrival. For most of the time, he lived in prison-like conditions until a 2016 court ruling found the men’s detention was unconstitutional, forcing it to close a year later.

“We had the worst experience of our lives on Manus,” Shafiq said. “If I think now about Manus prison, it makes me crazy.”

According to Amnesty International, about 700 refugees remain in PNG, mostly on Manus. Another 250 are detained on Nauru, government statistics show.

After several small-scale transfers, roughly 370 former detainees from Manus and Nauru have been accepted by the US, according to local media, citing Home Affairs officials in Australia.

A refugee from Myanmar is exploring new-found independence in Atlanta, Georgia. An Iranian refugee works as a welder in Phoenix, Arizona. Yousafzai has just been hired by a local business in Greensboro, North Carolina.

“We have to start at an entry-level job and build lives here,” Yousafzai said. “We are really respectful of Americans, because they gave us a home.”

Back in Manhattan, Shafiq took in the sights most New Yorkers barely bother to look at.

His first picture was of the New York Times building. “They wrote about us,” he said excitedly.

He took selfies with tall buildings and laughed at a dancing snowman in Times Square.

He said he was reassured that there are so many yellow taxis cramming the busy streets.

Standing on 41st Street – outside a bus station derided by New Yorkers as the ugliest place in the city, if not the world – Shafiq took a moment to take it all in. 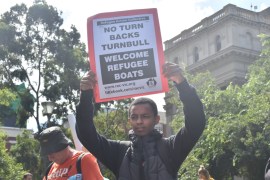 Rallies across Australia call for end to government’s policy on detention centres and to allow refugees in the country. 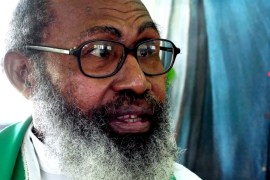