New York City – Karla Altmayer had mixed feelings when she heard about Harvey Weinstein’s arrest and the subsequent charges.

“I first thought about the survivors who came forward and what a significant and important moment this is for them,” said Altmayer, a Chicago-based lawyer and advocate against gender violence.

“At the same time, I felt frustrated with a system that failed to respond to survivors decades ago, allowing Weinstein and so many other abuses to act with impunity,” she told Al Jazeera.

Weinstein, a former prominent Hollywood producer, was arrested late last month on charges of rape and other sexual misconduct, involving allegations made by two women, including Lucia Evans who accused the Hollywood producer of making her perform oral sex during a casting meeting. The second woman has not been publicly identified.

On Tuesday, he pleaded not guilty to the charges, and has denied any wrongdoing.

In total, more than 30 women have accused Weinstein of sexual abuse.

Weinstein’s charges constitutes another tentative win for survivors and activists that have banded together to denounce the violence through campaigns like the viral #MeToo movement.

In January, a judge handed former USA Olympic Gymnastic physician Larry Nasser what effectively amounts to a life sentence after he pleaded guilty to child pornography crimes and assaulting nine girls and women in Michigan. More than 150 people have accused Nasser of sexual abuse.

In April, a jury found celebrity Bill Cosby guilty of drugging and sexually assaulting a woman more than a decade ago.

According to many women, the arrest of Weinstein and convictions of Cosby and Nassar, represents a “mainstream awakening” where perpetrators are no longer invincible, but also showcase a need for further commitment to changing the culture and policies within the workplace. For advocates, justice for survivors of sexual violence is also a long-time coming.

The charges against Weinstein came about seven months after women first began to publicly come forward against the now disgraced Hollywood producer.

Suzanne Goldberg, a professor at Columbia Law School and a leading expert on gender and sexuality law, said Weinstein’s arrest marks a shift in the pursuit of justice for survivors of sexual violence.

“This case has enormous importance for all of the individuals who were harmed by Weinstein but also has symbolic importance because it marks a shift from a world in which a notorious and egregious perpetrator was seemingly invincible to a world in which he has been arrested and is awaiting further criminal proceedings,” Goldberg told Al Jazeera.

“That’s a major shift and I think something many people felt would never happen. It may reinforce interest in more seriously pursuing others who have engaged in similar misconduct,” Goldberg told Al Jazeera.

According to the National Sexual Violence Resource Center, one in three women in the United States experience some form of sexual violence in their lives. And nearly a quarter of the 30,000 harassment charges filed with the US Equal Employment Opportunity Commission in 2016 were sexual harassment cases brought overwhelmingly by women, according to the National Women’s Law Center.

Weinstein is one of dozens of high-profile men accused of sexually harassing and assaulting women across the span decades. Like Weinstein, who was fired from his position as the head of the Weinstein Company, 71 men have been fired or resigned because of accusations of sexual misconduct against them, according to the New York Times.

Goldberg says the scale of the accusations is indicative of the pervasiveness of sexual violence.

“We have all heard stories of many situations where someone either had reputation for engaging in egregious harassment and assault and suffered no penalties,” she said.

“Some even have been elected to higher office in our country and elsewhere”.

Tarana Burke began the #MeToo movement about 10 years ago to help women of colour who were survivors of sexual violence access resources. After the Weinstein allegations, the hashtag became the centre of an international conversation about sexual violence and a platform for survivors to share their stories.

Burke told Variety the charges against Weinstein signifies a move “from the court of public opinion into the actual courtroom”.

“That is super cathartic for a bunch of survivors, or even survivors who are not necessarily victimised by him,” said the activist.

Chicago-based lawyer Altmayer said that Weinstein’s arrest is “just the beginning of a very long process” that is not only about the perpetrator’s arrest but about “securing justice for the survivors”.

Until we have a shared commitment to changing culture we won't see the problem go away.

Julie Goldscheid is a professor at the CUNY School of Law that focuses on gender equality that agrees that Weinstein’s arrest is “only the first step” in the road to justice.

“Whatever happens to Weinstein is one thing,” she told Al Jazeera.

“Now we’re seeing a number of powerful men, against whom accusations have been made for years, being held to account through the criminal justice system,” she added.

“But clearly when you look at the number of people against whom complaints are being made, I think the general public is getting a sense of just how deep and pervasive the problem of sexual assault it.”

“Until we have a shared commitment to changing culture we won’t see the problem go away,” Goldscheid said.

The Weinstein case has spurred conversation on everything from the prevalence of sexual harassment in the workplace, unequal pay, and the use of confidential settlements and non-disclosure agreements to keep victims of sexual violence and employees from speaking out.

Non-disclosure agreements in particular have come under scrutiny. The National Women’s Law Center has said the agreements, heavily used by the Weinstein Company for years, prevent victims from speaking out about the harassment they experienced.

Columbia Law School professor Goldberg said there is a national shift happening about whether non-disclosure agreements are acceptable.

“Non-disclosure agreements were the norm until recently in settling sexual harassment cases and that is shifting, partly at the insistence of employees and advocates and partly because of the leadership of a number of significant companies which have changed position” she said.

California passed a law 12 years ago prohibiting the use of the agreements in any settlement of felony sex offenses.

“It may sound redundant, but non-disclosure agreements re-enforce a culture of non-disclosure. And it is that culture that can enable harassment to persist,” said Goldberg.

That is a very important shift because before this became very public, people couldn't believe that it happened at the rates that it does,

While experts agree that Weinstein’s arrest represents progress for justice for survivors of violence, and policy change is necessary, public awareness remains important.

“I do think that the publicity that the Weinstein case has received, as well as the Cosby case and the Nassar case, is the very beginning of a culture shift and what I have heard is that people are beginning to acknowledge that this does happen,” said Altmayer.

“That is a very important shift because before this became very public, people couldn’t believe that it happened at the rates that it does,” she said. “That’s important, to believe that it actually exists, and believing survivors.” 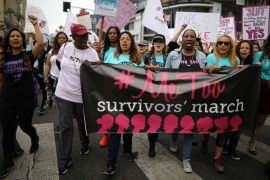 Women of colour in low-wage jobs face uphill battle to report and get justice for sexual abuse and harassment at work. 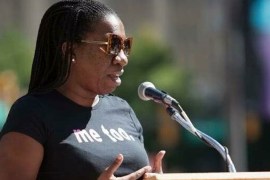 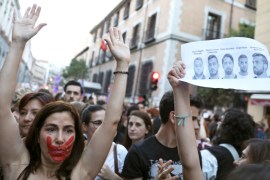 After a court failed to convict five men of raping a young woman, Spanish women are calling for legal reform.