By
Ali Rae and
Elizabeth Melimopoulos

Jucuapa, El Salvador – Driving down the main street in El Salvador’s Jucuapa, it is easy for one to realise the small town is not an ordinary place.

At first sight, the town is quiet and peaceful, but a certain tension can be felt.

Caskets now sit in the front windows of one-time bakeries and other shops, whose facades are still intact, but now have the distinct odour of a strong wood varnish.

The small town of about 18,000 people has been known for more than five years as the country’s coffin-making capital.

In 2015, 41 percent of the population in El Salvador lived in poverty, according to the World Bank, of these 10 percent lived in extreme poverty. Economic growth averaged only 1.9 percent between 2010 and 2016.

But the town’s residents found an unexpected exit from the dire economic situation: the funeral business. In 2013, Jucuapa started to see a boom in the business.

The small municipality has at least 18 registered coffin-making businesses, according to local media.

“I live only from this business, and up to now, it’s enough for me and my family,” William, a 50-year-old artisan who only gave his first name, told Al Jazeera.

He started his business four years ago, but he has worked in the industry since he was 15.

“Agriculture does not interest me. And one of the reasons the business has prospered is because of the access to wood here,” William said.

Inside another coffin workshop, young people – some as young as 14 years old – work hard, spray painting and varnishing different types of coffins.

Coffin manufacturer Pacheco said he had planned to study architecture, but had no choice but to help his father after the economic crisis in 2012.

At the time, Pacheco’s family decided to close their low-profit bakery and convert it into its current business venture: Eternal Rest.

“I got started just on building coffins, that was my first challenge … now, my challenge is building a room for the services with more advanced technology so people away can livestream it,” the 23-year-old explained.

But the demand for coffins has forced manufacturers to improvise their workshops. Situated in the bakery Pacheco’s father once owned, Eternal Rest coffins are made next to the old stone oven that once baked fresh bread.

“The smell of death is strong,” Pacheco said. “The strongest smell we’ve had, [was] from someone who got poisoned, it penetrated our clothes.”

The rural business boom is attributed to the rise in violence in recent years. With around 11 killings a day, the country consistently has one of the highest homicide rates in the world.

Some in Jucuapa have used the success of the industry to escape the violence.

“I studied until the ninth grade, and I do not want to go back to school, and I went with them to work in the workshops,” Salvador, who did not reveal surname, told Al Jazeera.

“It is a good business, it allows me to help my parents and family,” the 19-year-old said as he works.

For some, the business has provided a way out of the gang life that is common for many young people in the country.

“I worked in the farm fields, and I was in the streets as well, here is where I learned vices, and bad habits … I was part of a gang,” Denis, another young boy who works in the industry, told Al Jazeera.

“The gangs brainwash you, they promise you food, a bicycle, stuff,” the 16-year-old who did not reveal his last name said. “I never stole, my friends did, but I didn’t.”

While the industry has helped young people like Salvador and Denis find alternatives to the violence, mafias still required business owners to pay taxes to remain in the industry.

“Four months ago, it was not easy for people to be in this place,” Juan Cesar, a craftsman told Al Jazeera.

Cesar explained that those who want to get into the business often have to pay a bribe known as a “piso” to the mafias present in the town and surrounding areas.

“Sometimes, if you want to start a business, you have to pay, to be able to work,” he added.

The irony of profiting off the country’s violence was also not lost on the residents of Jucuapa.

“Now, there are no confrontations, but they are dead, they appear everywhere, this makes the business grow,” Julio Cesar, in Jucuapa, told Al Jazeera.

“Unfortunately, we live in a situation in which life is worthless … we have reached that extreme where life is not valued any more … people can easily kill and it’s like nothing happened,” Cesar said.

“This is what I do for a living, but my hope is that in our country, blood is no longer spilled.” 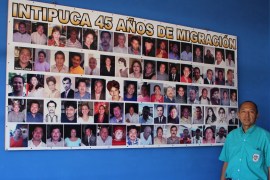 Intipuca: A town that relies on remittances braces for end of TPS

Residents of eastern El Salvador town worry about how they will survive after the end of US Temporary Protected Status. 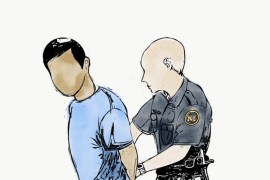 The teenagers trapped in Trump’s MS13-crackdown