More than 11 billion pieces of plastic larger than five centimetres wide are littering coral reefs across the Asia-Pacific region, according to a recent study.

That is enough plastic to make it from Earth to the moon and nearly halfway back.

Researchers who published the study last week in Science Magazine believe that the amount of plastic in coral reefs will grow by 40 percent in the next seven years.

Meanwhile, the researchers found that the chance of corals becoming infected with a disease increased from four percent to 89 percent when they were draped in plastic.

Plastic pollution is just one factor that is putting the world’s coral reefs at risk.

Coral reefs may have been around for as long as 500 million years, but scientists are warning that they might be gone or decimated by the end of the century.

Al Jazeera examines why coral reefs matter and if they can be saved.

What are coral reefs?

Reefs are created by hard corals which secrete a skeleton that can turn into giant structures like Australia’s Great Barrier Reef, the largest living structure on the planet.

In 2001, the UN estimated that the total surface area of coral reefs measured 284,300 square kilometres (sq km), which is just shy of the size of Italy.

More than half of the earth’s coral reefs is distributed over only five countries: Indonesia, Australia, the Philippines, France (including its overseas territories) and Papua New Guinea. Their reefs are the size of small countries themselves. Indonesia’s 51,020 sq km worth of reefs, for example, is nearly as big as Costa Rica.

Why do coral reefs matter?

The list of benefits of coral reefs is extensive, ranging from providing habitats for a large chunk of the world’s underwater creatures to protecting humans from waves.

Coral reefs take up only 0.1 percent of the seabed but support 25 percent of marine life.

The World Wildlife Fund (WWF) estimates that coral reefs provide an annual $30bn worth of goods and services. The conservation organisation estimates that about one billion people have some dependence on coral reefs for food and income from fishing. A well-managed square kilometre of coral reef can yield 15 tonnes of seafood per year – or 750 times the world’s per capita fish consumption of about 20 kilogrammes.

Coral reefs generate additional value by supporting tourism. A report by Australia’s Climate Council found that the loss of the Great Barrier Reef would cost adjacent regions one million visitors a year, put 10,000 jobs at risk and take $1bn in tourism spending from the economy.

Coral reefs also protect coastlines from powerful waves and flooding and prevent coastal erosion. A 2014 study published in Nature magazine found that coral reefs reduce wave energy by an average of 97 percent. Up to 200 million people may be receiving protection from reefs, the researchers found.

In some regions of the world, people’s dependence on coral reefs is especially high. Many Pacific Islanders, for instance, depend on reefs for food as well as protection from storms.

“Coral reefs mean survival for my community,” said Ratu Wiliame Katonivere, the Paramount Chief of Fiji’s Macuatu province, which flanks the Great Sea Reef. When changes happen to the reef, “everybody suffers”, he told Al Jazeera.

“[The fishers] have to go further out. It takes them longer to be out there. The returns are declining,” he said.

“If the reefs are lost, where would the fish go? If there’s no reef, then maybe it’s the end – doomsday.”

Why are coral reefs dying?

Tropical reefs have lost more than half their reef-building corals in the past 30 years, a 2015 WWF report found.

“We see globally a very, very, steep decline in the corals,” Erik Solheim, the head of the UN Environment Programme, told Al Jazeera. “It’s for sure already one of the biggest casualties of climate change.”

“Of course, what’s really unfair here is that those suffering the most direct consequences, economically and otherwise, are those who contributed nothing to the climate change.”

Since the beginning of the 20th century, sea surface temperatures have increased, and they continue to rise. Not able to cope with the unusually warm temperatures, corals reefs have experienced mass bleaching events at increasingly short intervals.

Coral bleaching is a stress response. When water temperatures get too warm, corals will expel the coloured, microscopic algae living in their tissue, which provide them with nutrition. When corals are without the algae for too long, they die of starvation.

Bleaching is believed to have killed as much as half the coral in the Great Barrier Reef in recent years.

Drag the slider across the image below to see the difference between a healthy and a bleached coral reef. Left: a healthy coral reef in American Samoa in December 2014. Right: the same location three months later.

Another recent study in Science magazine found that the frequency of severe bleaching events has increased fivefold since the 1980s: from once every 25 to 30 years, to once every six years today. This means that coral does not have enough time to recover before it is struck again.

UNESCO warned that by 2040 nearly all of the 29 world heritage reefs would be hit by severe bleaching twice per decade. By 2100, all UNESCO reefs may be dead.

Aside from climate change and plastic pollution, other man-made factors are putting additional pressure on coral reefs. Ocean acidification due to the water’s absorption of CO2 slows the growth of reefs, as well as destructive fishing practices – including dynamite fishing and overfishing – destroy reefs or hamper their ability to recover.

Activities happening on land can also adversely affect coral reefs. Erosion caused by construction, mining, logging and farming puts sediment into the oceans which can choke corals to death.

Is it too late to save the world’s coral reefs?

Scientists have issued bleak prognoses in recent years. A 2017 UNESCO report claimed that only by meeting the Paris Agreement’s most ambitious target – limiting the global average temperature increase to 1.5 degrees above pre-industrial levels – would there be a chance to save the world’s reefs.

In 2017, one study published in Nature Climate Change put the likelihood of keeping global warming contained to 1.5 degrees above pre-industrial levels at 1 percent.

It’s not all doom and gloom. A study prepared through the Global Coral Reef Monitoring Network found that live coral coverage in the Pacific islands area has remained relatively stable over the past 20 years. Their isolated geography means they are further removed from direct human stresses, such as overfishing, giving them a better chance of natural recovery.

And scientists are working on innovations that might mitigate the decline of reefs, like 3D-printing artificial reefs for marine life to settle on, or coral farming, which creates nurseries for fragments of corals to grow into maturity before being re-installed in their natural habitat.

Still, analysts agree that urgent and drastic action is required in order to save the world’s reefs.

“The more you know, the more depressing it becomes,” said Kesaia Tabunakawai, WWF representative in the Pacific.

“Especially when you see how slow action is [happening],” she told Al Jazeera.

Local programmes that promote better reef management can slow down the reefs’ decline, but without urgent action on global warming, Tabunakawai said, “it’s not going to help”.

“We cannot control what’s happening [in other countries]. We’re going down fighting rather than just sitting and waiting,” she said.

The UN’s Solheim said the world is at a “make or break point” when it comes to saving the reefs.

“[Letting reefs die] would be a shame, morally, for humans,” Solheim added.

“We would be the one generation destroying some of the most beautiful, most important ecosystems we have.” 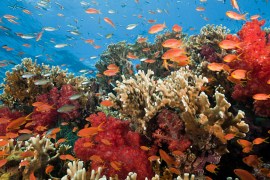 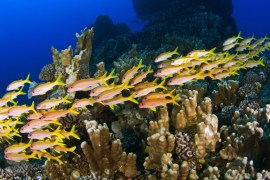 We explore how scientists are trying to prevent coral reefs from going extinct. 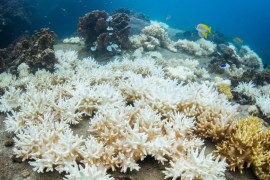 Coral catastrophe: The fight to save our dying reefs

A team of scientists are using assisted evolution to grow “super coral” that can withstand climate change.