The death of Muhammad Mahdi Akef, the former general guide of Egypt’s Muslim Brotherhood, behind bars on Friday has finally liberated him from the shackles of Egypt’s authoritarian military regime.

The 89-year-old top leader was the first to win the title of “ex-supreme guide” since no other leader of the Muslim Brotherhood’s top post left office while still alive. Yet, despite his old age and multitude of health problems the military-led government incarcerated him soon after the military coup in July 2013 that toppled the first elected civilian president.

The coup authorities had since refused to heed repeated calls by lawyers and human rights organisation that demanded Akef’s release. The military court that sent him to jail alleged that he was found guilty of showing contempt for the country’s judiciary that was said to be his crime.

Akef was born in 1928, the same year in which Hassan al-Banna founded the Muslim Brotherhood in Egypt. He joined the group at the age of 12 in 1940 and remained a loyal member until he passed away on Friday, September 22, 2017.

He knew Al-Banna and worked closely with him. When the group’s founder first met Akef, he was impressed with this young man’s special talents; he encouraged him to pursue university studies in the field of sport. He was well-built physically and had been an eager sportsman. Al-Banna selected him when he was still 17 years old to become part of what was known as the “special organisation”, a secretive quasi-military organisation designed to perform special missions, primarily against the British troops occupying Egypt and in Palestine against the Zionist occupation.

He was jailed by all successive governments in Egypt since the movement was first persecuted in 1948.

In 1954, he was among hundreds of Muslim Brotherhood members who were rounded up by former president Gamal Abdel Nasser. Akef was among the few who were sentenced to death but his sentence was soon commuted to life with labour.

He remained in prison for 20 years and was only released in 1974. Despite the length of his incarceration and the torment, he experienced while in detention, this was hardly a man who bore any grudges. And this was to become more clearly evident in the coming years.

Three years following his release, he travelled to Saudi Arabia where he worked until 1983 for the World Association of Muslim Youth (WAMY). He was responsible for the organisation of Muslim youth camps around the world.

He left for Europe in 1983, where he spent a few years in Germany heading the Islamic Centre in Munich. While in Germany, Akef’s involvement with the Brotherhood’s International Organisation deepened. This was a loose body coordinating cooperation among the various chapters of the Muslim Brotherhood around the world.

Muslim Brotherhood observers believe that the time Akef spent in Europe exposed him to aspects of Western life, such as democracy and civil liberties, that impressed him and impacted his thinking, eventually playing a role in determining the direction taken by the Muslim Brotherhood in Egypt a decade later.

FROM THE ARCHIVES: Mahdi Akef speaks to Al Jazeera in 2005

Upon his return to Egypt in 1987, he was elected to the group’s top leadership body known as the Guidance Bureau. During that same period, he won a parliamentary seat and served for three years as part of a sizable Muslim Brotherhood parliamentary bloc numbering 37 MPs. The Brotherhood had still not been allowed to run for parliamentary elections but did so through a special arrangement with the opposition socialist Labour Party.

In March 2004, under Akef, the Muslim Brotherhood issued for the first time a political reform initiative which gave insights into the thinking of the group regarding issues like democracy, human rights and women’s rights.

The role played by Akif in this process is well-known and has come to cause concern for the authorities. The movement seemed to be receiving a facelift, one showing it to be tolerant and engaging. That was bound to embarrass a regime bent on banning it and others from engagement in all forms of politics.

In the mid-1990s, the Muslim Brotherhood suffered a series of major blows. The first was an internal dispute that led to the split of a group of middle-rank members who had been actively involved in the trade unions. Akef was associated with that dispute because he was commissioned by the Guidance Bureau to instruct a group of young Muslim Brotherhood members in the organisation to explore the prospects of setting up a political party. He was strongly in favour of the idea of creating and registering a political party to be used as the platform for political activities while the group remains focused on religious and educational missionary activities.

Enthusiastic about the project, and rather than submit their findings to the group’s leadership as required, the young men instead applied for the registration of a political party. They were told they had not been given the mandate to do so and were instructed to withdraw the application.

Apparently, the leadership of the Muslim Brotherhood acted this way because it did not want to be drawn into a confrontation with the regime that banned the formation of new political parties. Nevertheless, the Mubarak regime accused the Brotherhood of playing games and of embarking on some sort of a division of labour.

Insisting that the dispute within the group was not genuine, the regime was bent on curtailing the movement before legal proceedings end up in granting it a licence for the practice of politics.

Indeed, in 1996, the regime launched a crackdown on the Muslim Brotherhood accusing it of plotting against the government. Akef and several of his comrades were tried before a military court and given jail sentences of various terms. He served three years and was released in 1999.

Although he sympathised with the young men who eventually split and formed Al-Wasat Party, he disagreed with their action. He was adamant that it would do them no good and that working from within to change things for the better was their best option. Nevertheless, he maintained good relations with the group and provided the channel through which communication between the young men and the movement was later resumed and developed into cooperation.

In January 2004, Akef was elected as “general guide” following the death of his predecessor Ma’mun Al-Hudaibi. But rather than remain in his post until he died, as had been the case with all previous guides, Akef refused to be nominated for another term and left his post in January 2010 to be replaced by Mohammad Badi.

Akef’s vision for the Muslim Brotherhood was revolutionary. This was a man already in his 80s but was speaking with the zeal and ambition of a young man. Young members in the movement respected him because of his approach. They felt he related to them and understood their needs and grievances. He always spoke to them about the need for what he called “renewing the blood of the movement” and delegating responsibilities to those who are apt and able.

Akef was already 85 years old when he was detained by the current military-led regime four years ago. His health had already been deteriorating and continued to do so until his death. Without the wisdom and vision of leaders like Akef, the Muslim Brotherhood organisation was left orphaned, in distress and in a mess.

Akef’s death, or his assassination by denying him medical treatment, could play its role in reviving the movement and inspiring sympathisers and fans across the world.

Like Mandela in South Africa, whose iconic image was created by the Apartheid regime he fought against form many decades, Akef has been turned into an icon by one of the most brutal regimes of our times. 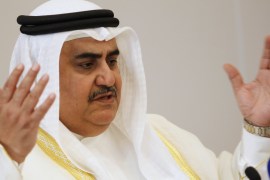 Khalid bin Ahmed al-Khalifa says anyone who supports or is affiliated with MB will be tried on terrorism-related crimes. 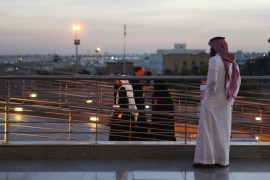 Saudi and the Brotherhood: From friends to foes

Shifting political goals in Riyadh have led to a muddled history between the Kingdom and the Muslim Brotherhood.