Balukhali, Cox’s Bazar – More than 430,000 Rohingya have arrived in Bangladesh’s Cox’s Bazar district in the past four weeks, fleeing a military offensive inside Myanmar.

Aid agencies say children, widows, the elderly and the disabled are the most vulnerable, requiring aid in the form of food, shelter and healthcare.

Al Jazeera spoke to some of the refugees, who shared their stories.

I fled my home in Kuinnyapara village in Maungdaw.

My son, Abdullah, was killed by the Myanmar army. He was 28. He took care of me. I fled for my life along with fellow villagers. I can barely walk, but somehow managed to reach Dhankhali Char to cross the Naf river into Bangladesh.

When I was helpless, a young man named Hamid Hossain, 27, rescued me. I arrived in Bangladesh with Hamid crossing the border at Shah Pori Dwip on September 3.

I first took shelter at Kutupalong extension area and later on, he, along with his family, shifted to a hilltop at Balukhali extension. I am living here with Hamid, but he has his own family of 15.

My husband Abu Bakar Siddique died eight years ago. Abdullah was among my eight children. I do not know the whereabouts of my other children.

The place I am living currently is nice, but far from the main road.

I have left everything to Allah and want to take my last breath without a fear of being attacked.

I fled from Badanat area in Maungdaw. Among my 10 children, only one son and a daughter are alive, the rest were killed during attacks. I am currently living near a hilltop with my daughter.

I want food. I did not eat anything since morning. Besides, I could not sleep due to pain in my body. Could you do anything for me?

READ MORE: ‘After the army left, I found my parents dead’

Nasima said: “I and my husband and children could pass the day with hunger, but it is very difficult for my mother to tolerate it at this age.”

I am visually impaired. I beg at Thaingkhali unregistered refugee camp to survive. I am from Charicomb in Maungdaw. I am staying in the place for the last seven days, but could not find a medical centre. I need to consult an eye doctor.

I do not know where I could find a medical camp for the visually impaired.

I am glad I came here. At least nobody is killing me. People here are generous, they are giving food.

My leg was paralysed when I was a child, as a result I could not get married until now.

My father and mother had died a few years ago, and we lived in the village of Morikhong in Maungdaw on our own.

When nearby villages came under attack, I gave some 300,000 Myanmar Kyat to two young boys from my village to help us reach Bangladesh.

Currently, I am staying at shed number 19 in Block D of Kutupalong registered camp in a home of one of my relatives.

REPORTER’S NOTEBOOK: They look at us with hope, but we can only document their despair

Jannat’s sister Shamima, 22, said they were living with some money left by their father

“But now we have very few money left.

“I do not know how we would survive after the money is finished. We have no sources of incomes here.

“Thanks to Handicapped International, an NGO, we have a place to get treatment free of cost. But who will provide us food and shelter in the future?” 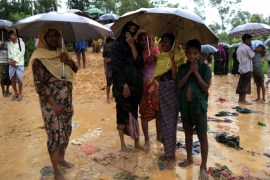 UN says there are ‘immense’ challenges as Bangladesh needs assistance to feed and shelter 436,000 Rohingya. 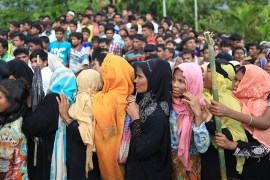