Berlin, Germany – As Germany prepares to go to the ballot box on September 24, the probable result is viewed with a sense of inevitability.

Among the clatter of political posters stacked up on lampposts around the capital Berlin, Angela Merkel‘s serene expression beams from her campaign poster: the embodiment of the stability and continuity she promises.

From discussions on the street to the predictions of the polls, there is a general consensus she will be elected for a fourth term and continue the coalition of conservative parties, the Christian Democratic Union (CDU) and the Social Democratic Party (SPD). In the shadow of the election of Trump, Brexit, and the rise of Marine Le Pen across the border, for many her victory will be a sigh of relief.

It will, however, represent continuity only at a surface level. The narrative that this is an uneventful election belies the deeper rumblings in the German political landscape. Polls predict that on Sunday the far-right party Alternative for Germany (AfD) will enter parliament for the first time. The party has used Merkel’s policy around refugees to bolster the anti-immigration vision at the heart of their campaign.

Anxiety around the rise of the far right in the country is felt particularly acutely by many refugees. The topic of refugee policy and integration has been a centre of gravity for parties across the political spectrum. Yet with no right to vote, many of the thousands of refugees in the country feel without a voice – objects, and not participants in the political discourse.

Al Jazeera spoke to some refugees in the capital about what the election means to them.

On the streets, you can barely feel there is an election approaching. With the American election, even my family back in Syria were talking about it. In Germany, it feels like a formality or a game. There is no real debate and no real competition – everyone expects Merkel to win.

Politicians are disconnected from the people here. Refugees and integration have been the focus of the election but none of the candidates have a detailed plan because nobody knows what integration actually means.

You feel like they are just surfing the waves and not engaging with the real problems. The refugee crisis opened the door for German people questioning inequality in the country. Some groups in society here really need a helping hand and the government isn’t supporting the poorer classes. When someone who is struggling sees a refugee wearing nice shoes, they become an easy scapegoat.

Merkel is not perfect, but she will enter the history books for her responses to refugees arriving in Europe. In Germany, the young are open minded and Merkel won so much support from them for how she handled the issue.

When other European leaders had their doors shut – or half closed – she kept them open. I was in Hungary at that time and I feel like it saved my life. When she wins it will confirm that she has paved a new way in Europe.

America is not an idol any more. When people ask where the liberty and freedom is you tell them, “Go to Germany.”

Eli Wael Khleifawi, 31 from Syria, project coordinator at Give Something Back to Berlin

The main parties are trying to be politically correct the whole time and are stuck in an unproductive standoff. The right wing is more in touch with how people on the ground actually feel.

They are scared and think there are foreigners flooding in and Islam is taking over.

Instead of shunning parties like the AfD, politicians should be engaging with their arguments and showing the public they are wrong. There is nothing to fear. Instead of seeing stories about refugees as if they are some species migrating from another planet, we should be hearing about them starting businesses, projects and assimilating.

You can feel the political divide between the old East and West getting stronger. In Eastern Germany, people feel economically left behind and that refugees have pushed them further into the margins.

Even in Berlin, as soon as you see AfD posters, you know you are in the east of the city.

I almost wish my German wasn’t good enough to read what they said. I’ve been here two years now and I can feel it getting tenser. Lots of refugees are worried about the right wing. In Berlin, it is getting verbal and outside the city, it is getting physical.

I think Merkel will win, but won’t survive another election after this. I would love to see the SPD and Die Linke increase their votes. The AfD will also definitely enter the Bundestag for the first time: It reminds me of 1932. I won’t be watching the election results – it will just make me angrier.

I can see where it is heading, but can’t vote and no one will listen to my opinions. It makes you feel hopeless. It is like watching a car about to crash. Everyone is just taking pictures instead of doing anything about it.

The question all politicians have this election is, “What are we going to do with refugees?” Die Linke (Left Party), Die Grunen (Green Party) and Social Democratic Party (SPD) are more supportive of refugees than Merkel’s Christian Democratic Union (CDU).

They have more conversation with us. For example, Die Linke supports giving flats to refugees that have been living in emergency shelters for up to two years in Berlin.

Some refugees like Merkel. When I was in Kosovo, I loved her, too. After living here and learning how things work, I feel differently.

My whole family has been deported. This makes me particularly interested in what is happening in German politics. I want the family reunification policy to change. I don’t want my siblings to forget me: I want to grow up with them.

The German election affects refugees, but we have no vote. Other people vote on issues that affect us – it makes no sense.

I think the far-right [AfD] will be successful, I just have that feeling. Last week, I was at a carnival for refugee rights and we went past an AfD election poster saying “Stop Islamization”. Lots of people have been so nice to us, but I have also had people on the street call me a “terrorist” and saying, “Go back to your country.”

I can’t live in a country that doesn’t allow me to wear a headscarf. What difference does it makes to anyone whether I wear a bikini or a burkini?

This election will affect my future. If AfD win power, even in a coalition, then everything is over.

Germany is now my home. I speak German better than my mother tongue. Sometimes, I wonder why there isn’t a country where I can live how I want.

It is hard to follow all the political debates around the election because I am still improving my German and the internet is patchy in our refugee shelter so I can’t always access Arabic media.

From what I have seen since coming to Germany, there are obvious divides in society about refugees. Some people welcome us with smiles and signs, and others are paranoid about us because of the negative stereotypes and propaganda people have seen in the media. Of course, this is changing the direction of German politics.

Merkel helped me and many other people in their darkest hours. I want to stay here and do hard, honest work just like I would have in my own country. She made the right decision to push refugees to learn German and integrate.

I feel safe while Merkel is the German chancellor and hope she wins. If the far right gets power, it won’t be pleasant for refugees. I can’t imagine what will happen. The terrorist attacks in Germany make people feel paranoid about us and the far right try to paint the picture that all refugees are bad.

The election will be a turning point. Hopefully, people will wake up and choose the democratic alternatives over more radical parties. It is an opportunity to forge the politics of the future.

There is an excitement in the streets about the elections – it was always the same in Afghanistan. It is sometimes hard to understand the German media, so I have learned about the policies of different parties by speaking to people. I know CDU, SPD and Die Linke are more supportive of refugees – and AfD have become famous for being against them.

It is empowering to see a female prime minister like Merkel. In Afghanistan, I was a female journalist and it was often difficult. Here, women are more supported. I think Merkel is a kind-hearted woman and I heard that she has a good chance of winning.

One of the hot topics in this election is deportations – especially deportations of Afghan refugees. Young Afghan men are particularly at risk of being sent back, even if that means being killed.

I wish we had more space to contribute to political debates. If we did, I would say to whoever wins the election on Sunday to stop deportations. People have struggled to get to Germany.

I joined the Die Linke earlier this summer to become an active member before the elections: getting out on the streets, distributing leaflets and attending meetings.

I was looking for a party that was socialist and humanist. I researched all the parties and I found Die Linke. They stand for gender equality and are the party in Germany really supporting refugees and speaking up against the increasingly restrictive policies such as Afghan deportations.

It’s important to be politically engaged because everything, even the air we breathe, is affected by politics. However, refugees have no voice at all in the political sphere in Germany.

They cannot vote and yet every political decision affects them. I wish there was something like a refugee union where we could raise our opinions. The refugee crisis was seen from the German perspective, without including the voices from the refugee side.

So often, when refugees are in the media, it is when someone commits a crime. If we had a platform, we could also condemn this violence and say it doesn’t represent us.

We could highlight the positive work we are doing and contribute to political debates around integration. There are around a million of us in the country, many very well educated, and yet we are silenced. 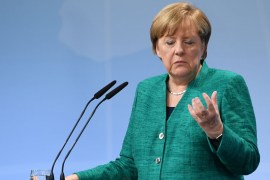 If she wins Sunday’s elections, Angela Merkel could be on track to become Germany’s longest-serving chancellor.