Occupied East Jerusalem – The Greek Orthodox Church has been plunged into a renewed crisis in the Holy Land as its leaders are accused of selling off land to extremist Jewish settlers in prime locations in Jerusalem’s Old City.

Hundreds of Palestinians rallied in the city this month to call for the removal of Patriarch Theophilos III, claiming that he had colluded with a settler organisation.

The settler group, Ateret Cohanim, has been working for decades to evict Palestinians from their homes and shops in the Old City, including around important holy sites such as the al-Aqsa Mosque compound.

The land deal, initiated back in 2004, brought down Theophilos’s predecessor, Irineos, more than a decade ago after he sold an option for a 198-year lease on three strategically located properties in the Old City to front companies representing Ateret Cohanim.

Secret tape recordings of Ateret Cohanim officials have in the past raised concerns that Israel is strong-arming each new Greek Orthodox Patriarch into selling land by refusing to agree to recognise his appointment until he cooperates with the settler group.

Much is at stake, as nearly a quarter of land in East Jerusalem is reported to be Church-owned, including the Mount of Olives, Sheikh Jarrah and large swaths of the Old City – all sites targeted by the settler movement.

The issue of land sales is especially contentious in East Jerusalem because the city is supposed to become the capital of a future Palestinian state.

But the controversy stretches much further, with growing numbers of Palestinian Christians outraged at a wave of recent land sales by the Patriarch inside Israel and the occupied West Bank. The Greek Orthodox Church is reputedly the second-largest landowner in the country after the Israeli state itself, with title deeds to some 400sq km, according to local Palestinian Christians.

More than 300 Palestinians filed a criminal complaint to the Palestinian attorney general in Ramallah last month, accusing the Patriarch of “treason”. They said they were forced to act after the Church refused to make public details of its real-estate deals.

The land sales have triggered a broader campaign demanding an end to the Church’s dominance by Greek-born clergy. Protesters this month were among those calling for Palestinian clerics to take over the Patriarchate.

Adi Bajali, who attended the protest in Jerusalem and is a member of the Orthodox Central Council, which represents Orthodox communities in Israel, Palestine and Jordan, said the Patriarch was behaving like a “dictator”.

“This land does not belong to him – it belongs to our community. It is our future and our children’s future,” he told Al Jazeera.

“Israel has a declared intention to make all of the land here Jewish. Our mother Church should not be assisting them by stripping us of our birthright.”

The dispute over the land sales in Jerusalem has been escalating since an Israeli judge ruled last month against an appeal by the Orthodox Church seeking to overturn the 2004 deal.

At the time, church officials blamed a rogue adviser, Nikolas Papadimos, for making the deal.

Two of the buildings, which currently serve as hotels, are close to Jaffa Gate, an entrance into the Old City that Israeli officials and settlers have been trying to “Judaise”. The area, although home to thousands of Palestinians, has effectively become the main gateway from West Jerusalem in Israel to the Western Wall and the Old City’s main settler colony, the Jewish quarter.

The third building is in the Muslim quarter, an area where Ateret Cohanim has been aggressively buying properties to encircle the al-Aqsa mosque compound.

“Many thousands of them, including the majority of Palestinian Christians in the city, live on Church-owned land,” he told Al Jazeera. “These sales put their future in the balance.”

In court, Theophilos’s officials argued that the sale of the three buildings was void because Papadimos had no authority to make the transaction. The Jerusalem court ruled that the deal was valid as money exchanged hands.

But in an apparent move to calm the rising tide of anger, leaders of the region’s main Churches this month condemned the ruling as an example of recent “breaches of the status quo” regarding Church property.

“We see in these actions a systematic attempt to undermine the integrity of the Holy City of Jerusalem and the Holy Land, and to weaken the Christian presence,” they wrote in a joint statement.

The statement also condemned a bill recently introduced in Israel’s parliament to allow the Israeli state to take over Church properties leased to private companies. Hundreds of Jewish families in West Jerusalem are up in arms after the Church secretly sold the lease to Israeli developers, leaving their future uncertain.

Although Theophilos denounced the court ruling and promised to appeal it to a higher court, it may prove hard to placate Palestinian Christians.

In July, 14 local Orthodox institutions – representing many of the half a million Greek Orthodox Christians in the occupied territories, Israel and Jordan – severed ties with Theophilos and his synod.

They have called on Mahmoud Abbas, the head of the Palestinian Authority (PA), and Jordan to force Theophilos’s removal. Under Jordanian law, they noted, the Patriarch is not allowed to sell Church property.

So far the PA and Jordan have kept a low profile. Many Palestinian Christians suspect that Theophilos’s position is being safeguarded by Israel and the United States.

“Theophilos needs the approval of the PA and Jordan, so if they wanted to they could force him to step down,” said Sahlieh. “It is time for them to act.”

“We need a grass-roots revolt,” Asad Daoud, an Orthodox Christian from the Galilee who attended the rally, told Al Jazeera.

“We must refuse to pray in the churches. We must boycott them until we get our Church back.”

Palestinian priests occupy only two seats in the Church’s 18-member synod. Atallah Hanna, the only Palestinian serving as a Greek Orthodox archbishop, has been repeatedly punished by the Patriarch for speaking out.

He did so again after the court ruling, issuing a statement: “Those who sell and forfeit our real estate and Orthodox endowments do not represent our Arab Church, its heritage, identity and historical presence in this holy land.”

Bajali said the Orthodox community was beset with rumours that the Patriarchate had allegedly hidden away proceeds from the sales in overseas bank accounts.

Daoud agreed: “They are thieves and will sell everything unless we stop them. Where has all the money from these sales gone? Why have they not built schools or cultural centres for our community? They have done nothing.”

The protest in Jerusalem was the latest development in a campaign by local Christians that has been gaining ground for several years.

At Orthodox Christmas in early 2015, large numbers of Palestinians protested against Theophilos in Bethlehem’s Manger Square as he arrived at the Church of the Nativity. Six youths were arrested, as demonstrators denounced what they termed a “Greek occupation” of their Church.

The local population were enraged by sales of land near Bethlehem, including a site next to the Mar Elias monastery, that freed up land for the expansion of settlements of encircling Jerusalem.

As well as selling land in the occupied territories, the Church is reported to have made deals to sell plots worth millions of dollars in Israel, including in West Jerusalem, Jaffa, Haifa, Nazareth and Caesarea, the home of Israeli Prime Minister Benjamin Netanyahu.

Hana Swaid, a Palestinian Christian and a former member of the Israeli parliament who now heads an organisation monitoring land problems for Palestinians in Israel, said things had got markedly worse under Theophilos.

“The Patriarch is selling more and more land,” he told Al Jazeera. “The Church used to offer long-term leases on its land, but kept the ownership. Now it’s selling the title deeds, too. The Church has betrayed the community.”

READ MORE: Behind the headlines in Jerusalem

Palestinians in Israel, who comprise a fifth of its population, are concerned about the land sales because Israel has an official policy of “Judaising” territory.

Palestinian communities in Israel had most of their lands seized by the state in the 1950s and 1960s, leaving them with no room to expand, said Swaid. Today, 93 percent of Israel’s territory is “nationalised”, held on behalf of world Jewry rather than Israeli citizens.

Bajali pointed out that much of the Church’s current lands had either been bequeathed by local Christians during the Ottoman period or bought with donations from Orthodox pilgrims.

“The land was given to the Church as an endowment, for safekeeping and to benefit the Orthodox community as a whole,” he said. “If the Patriarch keeps selling it, in another 100 years there will be nothing left – and no Christians here.”

In court documents, the Patriarchate has stated that it is mired in debt, a claim that local Christians struggle to accept.

“If they are really that hard-up, why have they not come to us asking for help?” said Daoud. “We would rather raise money for the Church and keep the lands than have the lands sold off.”

Swaid said one possible reason for the land sales was a desire by the Church to increase its influence with Israel against its chief rival, the Vatican.

“I don’t believe the Church needs the money, but it is in competition with the Catholic Church and selling land brings it closer to the Israeli authorities,” he said.

There are also suspicions that Theophilos and his predecessors may have been selling land to settlers and Israeli companies under more direct pressure, said Sahlieh. A new Patriarch requires recognition not just from Jordan and the PA, but from Israel, too.

An investigation by the Israeli newspaper Haaretz in early 2006, shortly after Theophilos was enthroned, suggested that recent Patriarchs had been strong-armed behind the scenes into collusion with Israel and settler groups.

Israel refused to recognise Theophilos for nearly two and a half years after his appointment. His predecessor, Irineos, was also denied recognition – in his case, for nearly four years, until shortly before the Jerusalem land sales went through.

In secret recordings, a senior official in Ateret Cohanim boasted that the settler group effectively had a veto over Israel’s approval of a new Patriarch. It withheld its agreement until the new Patriarch started selling land.

Asaf Baruchi, an adviser to Matityahu Dan, chairman of Ateret Cohanim, stated: “When [Irineos] sold to us, he became Patriarch … Now, the second one [Theophilos] wants to be Patriarch. And the second one hasn’t become patriarch – why? … We’re still with the first one (Irineos), because he sold to us.”

Irineos bolstered suspicions of collusion in a lawsuit he filed in 2005 to block the Jerusalem land sales. He said that, when he originally refused to sell to Ateret Cohanim, Dan came to his office and threatened “an atomic bomb” would explode in the courtyard unless the Patriarch signed. Two weeks later, the Israeli media reported the sale had gone through.

Swaid said it was time for real change. “Things won’t improve as long as the Church acts like a foreign entity and ignores its responsibilities and duties to the local Palestinian population.” 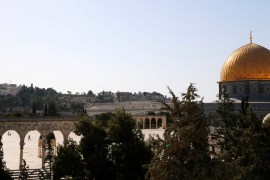