New Delhi, India – Hussain Johar sits in the corner shop where he sells cigarettes in New Delhi’s Madanpur Khadar area, a sprawling urban village along the bank of the Yamuna River.

The 17-year-old is one of the more than 200 Rohingya who have made this working class district their home over the past five years.

But now a plan by the government of Prime Minister Narendra Modi to deport the approximately 40,000 Rohingya estimated to be living across India back to neighbouring Myanmar has sent shockwaves through his community.

The Rohingya are a majority-Muslim ethnic group, often described as “the world’s most persecuted minority”, who have lived for centuries in the majority Buddhist Myanmar, where they have faced growing violence and persecution that has forced hundreds of thousands to flee to neighbouring countries.

“Innocent people are being killed and facing genocide in our home country. In this situation, how can you expect us to go back?” asks Johar, who fled the town of Buthidaung in Rakhine State, where nearly all of the Rohingya in Myanmar live and which they are not allowed to leave without government permission, following violence in 2012.

“However, in the future, if normalcy returns, we would definitely prefer to go back to our homeland,” he adds.

The government’s plan has been challenged in the Supreme Court, but 24-year-old Rohingya Mohammad Shakil, who also runs a corner shop, is worried.

“We are so scared by the recent government plan to send us back to Myanmar. How can we go to our home country if the … genocide and violence continue?” he asks.

“We would prefer to die here [in India] than return.”

The petition to India’s Supreme Court, the top court in the country, argues that the proposed deportation would violate Article 14 (the Right to Equality) and Article 21 (the Right to Life) of the Constitution of India. It adds that India is a signatory to various conventions that recognise the principle of “non-refoulement”, which prohibits forcing refugees to return to places where their lives might be at risk.

On Monday, the UN’s High Commissioner for Human Rights, Zeid Ra’ad al-Hussein, criticised India over its plan to deport Rohingya, telling the UN Human Rights Council: “India cannot carry out collective expulsions, or return people to a place where they risk torture or other serious violations.”

As it is a fundamental principle of customary international law, non-refoulement is binding on all states whether or not they have signed the UN Refugee Convention, to which India is not a signatory.

Growing violence against the Rohingya

The Myanmar armed forces, known as Tatmadaw, launched a bloody crackdown on the Rohingya late last month after some of its soldiers were attacked by the Arakan Rohingya Salvation Army (ARSA), a group which says it is obligated to “defend, salvage and protect [the] Rohingya community”. The Myanmar government considers the ARSA to be a “terrorist” organisation, a designation it rejects.

Hundreds of Rohingya have been killed, and nearly 300,000 have been forced to flee to Bangladesh since August 25, as Rohingya villages have been burned down by the Myanmar army.

Last week, Matthew Smith of Fortify Rights, a non-profit human rights organisation based in Southeast Asia, tweeted that 80 percent of the town of Maungdaw, which is in Rakhine State and borders Bangladesh, may have been burned down.

In 2015, the party of the long-incarcerated opposition leader Aung San Suu Kyi came to power, ending decades of military government rule, but she has remained silent over the attacks on Rohingya even as the UN’s Al-Hussein has called it a “textbook example of ethnic cleansing”.

In Madanpur Khadar, an atmosphere of fear prevails, and most Rohingya residents are reluctant to speak to journalists. But 32-year-old Tasleema, who fled Rakhine State in 2012 and asked to give only one name, wants to talk about how some Rohingya women and girls are sexually assaulted as they flee the country.

“How can people, particularly women and girls, return amid sexual assaults, including rapes by the army in broad daylight?” she asks, adding that “no action has ever been taken against the army” for the atrocities it has committed.

Does India want to deport Rohingya because they are Muslim?

Mohammad Haroon, who runs a small grocery store, is hopeful. “People in India have been very supportive,” the 45-year-old says.

Two charities, the Zakat Foundation of India (ZFI) and Don Bosco, have been working to help the Rohingya in New Delhi.

Zafar Mahmood, the president of ZFI, says 210 Rohingya are living in Madanpur Khadar on land provided by his organisation. “We are hosting them because it is our moral and religious duty,” Mahmood explains.

India is host to more than 300,000 refugees from neighbouring countries, but Mahmood says Rohingya are being targeted for deportation because most are Muslim.

“It fits into the larger policy that any Hindu coming from anywhere is welcome and can get a long-term visa, but if a Muslim is coming then there is a difficulty,” he says.

“The Citizen Amendments Bill allowed persecuted people from the Hindu, Sikh and Buddhist faiths to get Indian citizenship, but Muslims were not allowed even if they were persecuted,” explains Apoorvanand Jha, an academic and activist based in the Indian capital, New Delhi.

Last week Modi visited Myanmar – his second visit in three years – and held talks with Aung San Suu Kyi in the capital Nay Pyi Taw. A joint statement issued at the end of their talks failed to mention the brutal military crackdown on the Rohingya.

In a blog last week, Mani Shankar Aiyer, a former cabinet minister and member of the opposition Congress party, accused the Modi government of ending India’s “golden tradition” of opening its doors to refugees.

“… if we can assure indefinite refuge to uncounted generations of Tibetans, unnumbered Afghans and hundreds of thousands of Sri Lankan Tamils refugees, why not a few thousand Rohingya?” he wrote.

But some foreign policy experts say India’s closeness to Myanmar is motivated by security and strategic interests. New Delhi wants the Tatmadaw to deny haven to Indian armed groups that operate along the 1,600km border between the two countries. And as part of its “Act East” policy, the Modi government is seeking to build economic, strategic, political and cultural partnerships with countries in the Asia-Pacific region, among them Myanmar.

“India has significant geopolitical and security interests that continue to shape its outreach to Myanmar. As China’s profile continues to rise in India’s vicinity, New Delhi would like to enhance India’s presence by developing infrastructure and connectivity projects in the country,” wrote Harsh V Pant, a professor of international relations at the Defence Studies Department and the India Institute at King’s College London, in an article in the Diplomat.

In 2016, India built a port in Sittwe, the capital of Rakhine State. It is currently constructing a highway that will connect Moreh in India with Mae Sot in Thailand via Myanmar. And it has plans to further boost military and economic cooperation with the country, to which it sells a wide range of defence equipment.

In July, the commander-in-chief of Myanmar’s armed forces and a top navy delegation visited India.

But Apoorvanand believes the Hindutva ideology of the ruling BJP is also a significant factor in the government’s bid to deport Rohingya.

“The way Rohingya question is being projected confirms the nonsensical Hindu view that Muslims are out to overtake this country,” he says. “Muslims are seen as a threat.”

Sanjay Kumar contributed to this report from New Delhi. 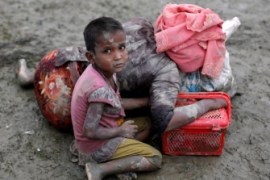 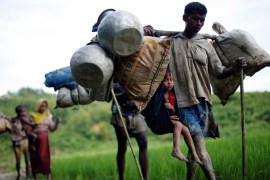