Girls from Myanmar, some as young as 15, continue to work illegally as maids in Singapore, despite both countries banning the practice, NGOs say.

Since 2014, the government of Myanmar has imposed a ban on domestic workers going to Singapore.

But a shelter for domestic workers in Singapore is reporting increasing numbers of women from Myanmar seeking help. Some of them are teenagers. Under Singaporean law, foreign domestic workers must be at least 23 years old.

There are also workers who are definitely under 18. It seems to be a particular problem with the Myanmar women

“We see on average at least one case a week,” says Stephanie Chok, from the Humanitarian Organisation for Migration Economics (HOME), referring to underage workers from Myanmar.

“We are seeing more Myanmar domestic workers coming for help,” says Chok. “Previously, it used to be more Filipinos, Indonesians. There are some weeks in our shelter where up to 40 percent could be from Myanmar.”

A 101 East investigation revealed that recruitment agents in Myanmar were giving girls passports with fake birthdates before sending them to work in Singapore.

A 15-year-old girl told 101 East she was given false documents and told to lie about her age before she was taken to Singapore, where she says she looked after two children and was forced to do housework until late at night.

A survey by Transient Workers Count Too, another non-governmental organisation, last year found that 16 of the 55 Myanmar domestic workers they interviewed had been under the age of 23 when they arrived in Singapore.

“There are also workers who are definitely under 18,” says the group’s John Gee. “It seems to be a particular problem with the Myanmar women.”

Several cases involving maids from Myanmar working in Singapore have been reported by the Myanmar media in recent months.

In June, a 25-year-old Myanmar woman reportedly died after plunging from the 18th floor of an apartment building in Singapore.

In another recent case, it was reported that a 15-year-old domestic helper sustained spinal injuries after falling from her employer’s ninth-floor apartment.

Chok says little has changed since the Myanmar government banned domestic workers from coming to Singapore three years ago.

“We’re not seeing the ban have any real impact on the ground in terms of domestic workers being allowed to come to Singapore,” she says. “For us, it’s really business as usual.”

The Myanmar Embassy in Singapore did not respond to requests for comment.

But the Singapore government’s Ministry of Manpower said the number of underage foreign domestic workers was “low”.

A Ministry spokesperson said in a statement that it was “important for authorities in the source country to ensure the accuracy of the foreign domestic worker details in the passport”.

The government also expects employment agencies to carry out checks and interviews and examine workers’ documents.

From 2012 to 2016, the ministry took action against nine employment agencies that failed to comply with regulations.

The ministry’s statement did not specify what action was taken, but agencies can face fines of up to S$5,000 ($3,668) and/or six months in prison, as well as having their licence revoked.

Other measures to detect cases of underage maids include the government conducting interviews, particularly with “those who look relatively young”, and a mandatory “settling-in programme” to educate new maids about the age requirements, the statement said.

About 240,000 foreign maids work in Singaporean homes. Most come from the Philippines and Indonesia but those from Myanmar are among the most vulnerable, according to NGO workers.

Chok says domestic helpers from Myanmar are less likely to speak English and often have no rest days stipulated in their contracts.

“That really adds to their isolation,” she says.

The Myanmar women who come to the NGO’s Singapore shelter report problems ranging from unpaid wages to verbal, physical and sexual abuse by their employers.

Some also complained that their employers did not give them sufficient food, with some given only bread to eat.

“I asked them, ‘What do you do to stave off hunger?’ and they said they just drink water,” Chok says.

Gee, from Transient Workers Count Too, says Myanmar domestic workers are more likely to be confined to their employer’s home and to not have access to a phone.

“The women who most need help are the ones who are least able to access it,” he says.

Meanwhile, at the shelter run by HOME, there is not enough space to accommodate all of the women seeking help, according to Chok. 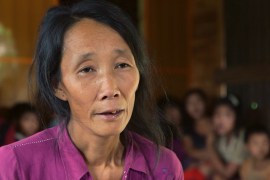 Agents in Myanmar are recruiting girls as young as 15 to work as domestic helpers in Singapore. 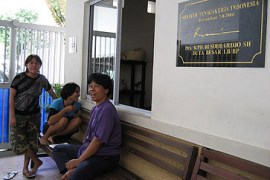 Maids in a Malaysian dilemma