In the second part, we look at whether the whole concept of peacekeeping is flawed and ask if the UN is sending the wrong people to keep the peace.

Read Part I: Why do some UN peacekeepers rape?

At its core, say some experts, peacekeeping is an ambiguous and contradictory notion.

Militaries by definition demand a type of behaviour “premised on violence and aggression, individual conformity to military discipline,” writes Sandra Whitworth, a professor of political science at York University in Toronto, Canada and the author of Men, Militarism, and UN Peacekeeping: A Gendered Analysis.

But, say researchers Paul Higate, a lecturer at the school of sociology, politics and international studies at the University of Bristol in the UK, and Marsha Henry, an associate professor at the Gender Institute at the UK’s London School of Economics, peacekeeping operations require a different set of values and emotions, like impartiality and empathy – “attributes that may have been discouraged by traditional military training”.

In 2000, UN Security Council Resolution 1325 recognised that armed conflict affected women and men in different ways. But what this resolution means in practice is unclear. Nina Wilen, deputy editor of the journal International Peacekeeping and a postdoctoral fellow based in  Belgium , says that while the resolution brings attention to “women’s role and participation in conflict and peace processes”, it also “paints an essentialist picture of women in conflict and peace processes as ‘inherently peaceful’ and ‘fragile'”.

Kelly-Jo Bluen, a former project leader for international justice at the Institute for Justice and Reconciliation in Johannesburg, South Africa, believes that the emphasis on rape as a weapon of war complicates approaches to it when it is carried out by those who aren’t in an explicitly military role.

This type of project needs diversity … when we go on patrol, it is clear we need women on patrol, because women are most vulnerable and it encourages them to come out of their shell

Bluen says the UN Security Council’s Women, Peace and Security Agenda frameworks view peacekeepers as part of the solution to sexual violence, as opposed to complicit in it.

“We operate in good and bad binaries. We see rape as … perpetrated by monsters. As a result, the system is not able to accommodate acts of violence when it doesn’t fit our moral universe. Our fixation with the perfect victim and the perfect perpetrator. What this means is that if a perpetrator does not fit the idea of an ‘evil warlord’, it simply doesn’t suit the narrative.”

“Sexual violence happens in a multiplicity of ways,” Bluen argues.

“And … if we recognise patriarchy is a global phenomenon, why do we think that international organisations would be exempt?” she asks.

A symptom of racism

Sexual violence is also a symptom of racism and feelings of superiority towards the local community that are often inbuilt into the peacekeeping industry, Henry believes.

There have been more cases of sexual exploitation and abuse by peacekeepers in the missions in the Democratic Republic of Congo, the Central African Republic, Haiti, Liberia, South Sudan and Ivory Coast than in all other UN missions combined.

Henry says the fact that many of the most severely affected places are former French colonies speaks to the way in which a colonial past has influenced contemporary forms of sexual violence.

“There is always an element of racism, gender and class at play in these contexts. Peacekeeping spaces are not neutral sites,” she explains.

Aditya Mehta, a communications officer at the UN Department of Peacekeeping Operations, explains that it is the responsibility of troop and police-contributing countries to screen those they nominate to serve in peacekeeping missions.

“The UN requests member states to certify they have conducted this screening for disciplinary/criminal records and human rights violations, including sexual exploitation and abuse,” he explains, adding: “In April 2016, the Secretariat has begun vetting all individuals being deployed as members of military contingents and formed police units for prior misconduct … while in the service of the United Nations. This marks a considerable expansion to the previously established vetting practices …”

Should there be more female peacekeepers?

One of the recurring issues raised by experts and UN personnel is the low number of women involved in peacekeeping operations.

According to Mehta: “Women are deployed as police, military and civilian[s] and have made a positive impact on peacekeeping environments, both in supporting the role of women in building peace and [in] protecting women’s rights.”

He says that of the approximately 105,000 peacekeepers who are deployed, roughly 3,700 military personnel and 1,200 police are women.

Mehta explains that this is an increase that has been made possible due to advocacy efforts by the UN. “The UN Police Division is continuing its global effort to recruit more female police officers into national police services and into UN police operations around the world,” he says. “Similarly, the Office of Military Affairs is engaging troop contributing countries to encourage and advocate for the deployment of women to uniformed functions.”

“However,” Mehta adds, “the responsibility for deployment of women in the police and military lies with member states.”

Evelyn Kugblenu, the gender officer for UN police in MINUSCA, the UN mission in the Central African Republic (CAR), says there are just 44 women in that mission.

“This type of project needs diversity … when we go on patrol, it is clear we need women on patrol, because women are most vulnerable and it encourages them to come out of their shell,” she tells Al Jazeera from Bangui, the capital of CAR.

But Henry says that increasing the number of women on patrol won’t change an operational hierarchy dominated by men.

Laskhmi Puri, the deputy executive director of UN Women, told Al Jazeera in May 2016 that UN Women conducted “gender training” before troops were deployed in an attempt to make them “gender sensitive”.

But Henry says the expectation that training will turn peacekeepers into “gender-aware individuals” is naive.

Training has evolved, she says, but it isn’t the solution.

Bluen is more candid in her criticism. She says pinning “better behaviour” on “training” and “sensitisation” is irresponsible and almost certainly coded in racism. There are currently around 96,000 peacekeepers around the world. The biggest troop-contributing countries include Bangladesh, Ethiopia, India, Rwanda and Pakistan.

“What it says to me is that these are barbarian troops who need to be civilised, when we all know that all countries from all parts of the globe have committed these crimes,” she explains.

Kathryn Bolkovac, an American former UN police investigator who exposed a sex trafficking ring among UN police officers in Bosnia in 1999, agrees, arguing that anyone who believes the issue is about poorly trained Third World troops “is delusional”.

Both Bluen and Balkovac believe the problem is not one of training or the calibre of troops but of “militarised masculinity”.

“Peacekeeping is a militarised act, with military actors, in a militarised context, and this always comes with patriarchy,” Bluen says.

But Stephane Dujarric, spokesperson for the UN secretary-general, explains that the term “peacekeeper” applies not only to blue-helmeted armed soldiers but also to unarmed police officers and military observers, doctors and civilians.

These peacekeepers, Dujarric says, often go to places where no one else wants to go, to areas where conflict is still active, with the mandate to protect civilians.

“Peacekeepers have often been called upon to adopt a forward-leaning posture to do their job, this includes the physical protection of civilians. It’s clear that this work can only be done by men and women who are trained soldiers,” Dujarric adds.

But Paula Donovan, from New York-based NGO Aids Free World, insists it is time that peacekeeping as an idea is revisited, interrogated and reconsidered.

“Do you really take soldiers, trained to kill and trained to dehumanise so they can be killing machines, and suddenly redeploy them, and get them to play soccer; patrol the streets? Does that formula make sense in this day and age?” she asks.

In 2008, 13-year-old Elizabeth* was pushed to the ground by peacekeepers in a field close to her home near the town of Abobo in the Ivory Coast. The peacekeepers gang-raped her and left her bleeding on the field.

“They grabbed me and threw me to the ground and they forced themselves on me … I tried to escape, but there were 10 of them and I could do nothing,” she says. 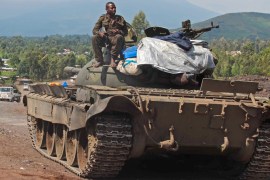 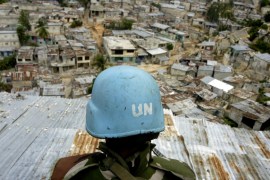