More than 2,100 people have “adopted a Nazi” in the US, raising more than $134,000 to help neo-Nazis and white supremacists “fund their own demise”.

The campaign, launched by the Jewish Bar Association of San Francisco (JBASF), invites individuals to donate money for every person planning to attend a right-wing rally scheduled for Saturday in the northern California city.

The money will be donated to the Southern Poverty Law Center (SPLC), an organisation that monitors hate groups across the country.

The “Adopt a Nazi (not really)” GoFundMe campaign is one of several alternative methods that organisations are using to counter the narrative of the alt-right, a loosely knit far-right network that includes white supremacists and white nationalists, among other groups.

The events in Charlottesville, Virginia earlier this month, where members of the alt-right, clashed with anti-racist protesters and the announcement of a “Freedom Rally” by the far-right Patriot Prayer group in San Francisco, prompted JBASF board member Cody Harris to seek a creative way to respond.

It was thousands of miles away in Germany that he found his inspiration.

A “Nazis against Nazis” walkathon in the German town of Wunsiedel in 2014 raised 10 euros for every metre marched by neo-Nazis.

For years, Wunsiedel had become a focal point for neo-Nazis as it was the once burial place of Rudolf Hess, the notorious deputy of Adolf Hitler. Today, it has become an inspiration to cities, like San Francisco and elsewhere, as well as organisations across the US as they seek to counter the alt-right.

Harris tells Al Jazeera that he found the Wunsiedel campaign to be “an effective tactic that channels the anguish and the anger … with something productive, creative and helpful”.

He adds that it is a “nice way to take the perceived energy that these white supremacists feel now and turn it against them and to mobilise and try to combat them”.

Saturday’s so-called Freedom Rally in San Francisco has stirred both local and national tensions, with politicians at all levels getting involved in the debate.

The National Parks Service only issued a permit for the rally after it said it had guarantees from Joey Gibson, the leader of Patriot Prayer, that weapons and items, like tiki torches, that could be turned into weapons would be banned.

Gibson recently denounced white supremacy, saying in a video that “for those of you who believe we are seriously going to throw a white nationalist supremacist rally in San Francisco, it’s time for logic”.

But the group’s rallies in the past have attracted white supremacists, neo-Nazis, Ku Klux Klan (KKK) members and others from a number of right-wing organisations, leading many activists, as well as the SPLC to say the group only seeks to provoke chaos and violence.

“We call him a provocateur for a reason,” she adds.

“He just seems to be organising and hosting a series of rallies around the country in areas that have a strong liberal or progressive community in an attempt to provoke them, provoke chaos and confusion and violence so that the folks on the extreme right … can paint themselves as victims and paint folks on the left, they would say the far-left, as extremists.”

Patriot Prayer rallies in both Oregon and Washington have resulted in clashes between white supremacists and anti-racist protesters.

According to local media, the gun-wielding Oath Keepers have said they will be at Saturday’s event.

JBASF’s Harris says he welcomes Gibson’s disavowment of white supremacists and neo-Nazis and invites him to contribute to the campaign, but also adds “there’s something about what he’s doing that is attracting these types of people”.

“So you don’t want white nationalists to show up at your rally, but they keep showing up for your rally, so maybe there’s something wrong with your rally.”

The original idea of the “Nazi against Nazi” campaign in Wunsiedel came to fruition after the town grew tired of an annual neo-Nazi march taking over its streets.

“We were thinking about how to change the rules,” Fabian Wichmann, one of the organisers, explains.

“There are normal reactions from demonstrations – like banning or blocking or being loud – but they’re mainly utilised,” Wichmann says, adding that they were searching for a way to make those attending the march look foolish.

“Everybody knows what happens and … sometimes [neo-Nazis] play with these reactions and they make these counterprotesters angry … and they use these pictures of angry protesters to say, ‘Okay, we are the quiet guys and the loud ones are the counterprotesters’.”

Along the route, banners reading, “If only the Fuhrer knew!” and “National and generous”, as well as messages of appreciation taunted the more than 200 neo-Nazis marching.

Wichmann says he and other organisers wanted the neo-Nazis to realise that by marching, there would be a direct result against them.

By the end of the march, about $12,000 had been raised for EXIT Deutschland, an organisation Wichmann is a part of that helps individuals who want to leave extreme right-wing groups.

‘Making a fool out of neo-Nazis’

In Knoxville, Tennessee, organisers, too, have taken inspiration from the success of the Wunsiedel walkathon, recently launching a similar campaign to trick neo-Nazis into raising money for a cause that goes against their narrative.

Under the banner “HateXChange: Flip hate into involuntary donations”, individuals are asked to donate money for every white supremacist, neo-Nazi and far-right group member who shows up to a rally scheduled for Saturday in the southern US city.

“We want to make sure that they know what they do will cause involuntary donations,” says Achim Schmid (known in the US as TM Garrett), the “troll white supremacy” campaign organiser and an ambassador of EXIT USA, the US equivalent of EXIT Deutschland.

The rally, organised by Confederate 28, a white supremacist group that affiliates itself with the UK-based skinhead group Blood and Honour, is centred on a statue that honours Confederate soldiers in the city.

What threatens us the most are these white racist nationalists, alt-right, KKK, you name it, that's the threat. It's the white supremacists.

Schmid tells Al Jazeera that he knows all too well how and what neo-Nazis and white supremacists think.

He was once a part of part of the KKK in Germany and was involved in the skinhead music scene.

While he left that life behind in 2002, he says he sees the same qualities he once had in those participating in white supremacist rallies today.

These types of campaigns really “make a fool” out of those attending the rallies, Schmid says. “They’re embarrassed.”

He adds that white supremacists and neo-Nazis are especially angered if they know that so-called formers, like himself, are involved.

“It makes them furious.”

Schmid is also launching a social media campaign, raising one dollar for anti-racist organisations for every “hate post” reported.

The SPLC’s Brooks says that such alternative methods are important as they take the attention off alt-right groups.

“We don’t want to ever just direct all the attention to them because that is what they want,” Brooks says. “We have to deny them the spectacle that they’re so desperate to have.”

Both Schmid and Wichmann say they hope their alternative campaigns, as well as peaceful counterprotests will help counter the narrative of the alt-right.

For Schmid, especially, he says more must be done to stop what he calls the greatest threat to the United States.

“Here in the USA, the main threat is not ISIS,” Schmid says referring to the Islamic State of Iraq and the Levant (ISIL).

“What threatens us the most are these white racist nationalists, alt-right, KKK, you name it, that’s the threat. It’s the white supremacists.” 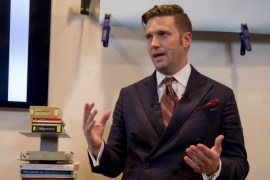