Jericho, Occupied West Bank – Stone vaults are taking a new shape in the oasis town of Jericho, where two Palestinian architects are investigating the capacity of stone as a structural material.

Their prototype vault comprises a series of arching pillars made up of 300 interlocking limestone blocks. Covering 60 square metres, the structure aims to create a new mode of urbanism in Palestine, said Elias Anastas, one of the designers.

“In Palestine, we have a majority of limestone that is of good mechanical characteristics that we try to integrate in the process of design. All this leads to a change of shapes linked to the use of the material and the inclusion of stone in a contemporary architectural language,” his co-designer, Yousef Anastas, told Al Jazeera.

Born in Bethlehem, the Anastas brothers studied architecture in France, and they are now leading research in stereotomy – the art of cutting and assembling stone for construction purposes – at the French architectural university Ensa Paris Malaquais.

“Our research focuses on investigating the capacity of using stone as a structural material. Through the understanding of our historical cities, the research tries to link techniques of construction to urban morphologies … The idea is to suggest new urban morphologies linked to the scientific use of a largely available material in Palestine,” Yousef said.

In a land where stone-cutting and building is considered to be part of the local heritage, the introduction of new construction materials such as reinforced concrete and steel has largely taken over in common usage. Nowadays, stone is often used only as cladding on top of built structures.

“While stone was used as a structural material in the past, it is now used as cladding material, as a wrapping of buildings covering the concrete skeletons,” Elias said, noting that this has negatively affected the urban fabric of Palestinian cities.

The brothers’ vault design, initiated in January 2016, became a reality the following November as the stones were physically cut. They completed building the prototype in Jericho in February.

“The stone blocks … are cut with unique dimensions and angles,” Yousef said. “Each stone plays the same structural role, as it supports two other stones and is supported by two other stones; thus, the mutually supported structure.”

Some local residents said they were unsure of the vault’s purpose. Fuad, 13, said it could be a spot to serve “coffee and shisha”. Another passerby suggested it was meant as “a resting place … to give shade”.

According to the Anastas brothers, one of the purposes of this and future vaults will be to host selected artists and writers from Palestine and abroad.

So why does stone remain the most striking feature in most buildings across Palestine? It is in part due to a British-Mandate-era building code intended to preserve the distinctive look of Jerusalem – a code that remains in effect today.

The distinctive look is a result of Jerusalem having witnessed many civilisations and building styles.

In her book, Memoirs Engraved in Stone: Palestinian Urban Mansions, Diala Khaswaneh describes the skill of local stone carvers, noting the importance of stone as a structural material throughout various architectural eras in Palestine.

But the skills on how to build with stone are fast disappearing, as modern construction materials prevail. The skill of “anchoring a stone building into the landscape” is what Elias wants to preserve, with new modern building techniques that can keep the “noble material” of stone central to the Palestinian landscape.

Jericho, famous among Palestinians for its citrus plantations and warm winter weather, is one of the oldest cities in the world with uninterrupted human settlement. Visitors flock to the city in winter, while in summer Jericho reverts to near-isolation.

The abundance of quarries in central Palestine makes stone a more economical building option throughout the region. Studies have found that there are as many as 300 quarries producing some 22 million square metres of stone and marble throughout the occupied West Bank annually. Palestine is the 12th largest exporter of these materials.

And in the coming years, the Anastas brothers plan to build on their vision by constructing 11 more vaults on the same site where their prototype currently stands. 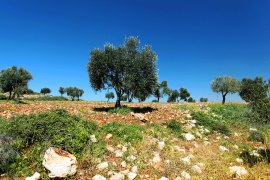 Walking a path of resistance in Palestine 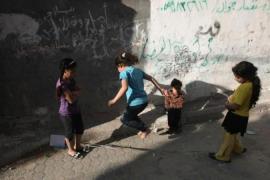 Writing a people’s history of Israel/Palestine

People’s history opens a new understanding of the current situation in the Israeli/Palestine conflict.