The United States’ move to cut and delay economic and military aid to Egypt is symbolic and will not have a major effect on Egypt’s capabilities, analysts say.

“Egypt will still receive the vast majority of its $1.3bn in military assistance,” said Sarah Yerkes, a fellow at the Washington-based Carnegie Endowment for International Peace.

“This [move] is far more symbolic than practical. It is embarrassing to Egypt, but it will not have a major impact on Egypt’s capabilities,” Yerkes told Al Jazeera.

The unprecedented decision to cut $95.7m in aid, and indefinitely withhold another $195m in military aid, reflects what US official sources described as the US’ frustration with the Egyptian government’s stance on civil liberties, specifically with regards to a law that regulates NGOs.

The law, which introduces jail terms of up to five years for non-compliance, is largely seen by civil society groups as part of a wider strategy to crackdown on public dissent. During a visit to Washington last April, Egyptian officials had pledged to scrap the draft law, which received much criticism from international rights groups such as US-based Human Rights Watch.

Egypt’s foreign ministry described the aid cut and delay move as a “misjudgment of the nature of the strategic relations that have bound the two countries for decades.”

“[The move] reflects a lack of careful understanding of the importance of supporting the stability and success of Egypt, as well as the size and nature of the security and economic challenges faced by the Egyptian people,” the statement added.

Suspending some of the military aid to Egypt is determined by the US budget cycle, where US Secretary of State, Rex Tillerson, is required to certify that Egypt has met the human rights benchmarks set by Congress in order for it to qualify as an aid recipient.

But the cut is little in comparison to what is in the “pipeline” for Egypt.

According to Cole Bockenfeld, deputy director for policy at the Project on Middle East Democracy, at least $400m in economic assistance is in the works for Egypt, much of which is “actively obstructed by the Egyptian government”.

According to Bockenfeld, the justifications for the decision are not clear, yet the move is not likely to affect Egypt’s military campaign in Sinai.

“This decision does not have any practical impact on the Egyptian military’s ability to conduct operations in the Sinai.”

READ MORE: Egypt ‘worse off on every indicator’ since 2013 coup

Robert Springborg, Middle East expert and non-resident fellow at the Italian Institute of International Affairs, told Al Jazeera that the move is part of the Trump administration’s proposal to drastically reduce funds, especially to the Middle East.

behaviour. But it does send an important signal more broadly that the US is recognising the alarming state of human rights in Egypt and not adopting the regime’s line.”]

“But the other important factor is the general ‘getting tough’ approach of Trump, which we see with regard to various ‘allies’ which he would like to see supporting the US in more direct, manifest ways,” he said, also referencing Egypt’s support for North Korea.

Egypt has been a recipient of US aid since it established diplomatic relations with the Israel, following the signing of the 1978 Camp David Accords, brokered by then-US President Jimmy Carter.

As part of the accords, a biennial series of joint military exercises led by Egypt and the US troops in Egypt had commenced in 1980. Referred to as Operation Bright Star, the coalition training is designed to strengthen ties between the two forces, and assist the US in rooting its Middle East allies.

By the early 1990s, Egypt became one of the US’ major military allies in the region. Although the event had been suspended since 2009, it is scheduled to recommence next month. According to Cole, Egypt has sufficient funds in their account to continue military operations “unimpeded”.

Yerkes said that it is unlikely for Egypt to implement drastic measures at this stage, by cancelling Operation Bright Star, for instance.

“It was such a win for Egypt that the US decided to reinstate it. Cancelling it would be a very big deal,” she told Al Jazeera.

Similarly, Issandr El Amrani, head of the North Africa section at the International Crisis Group, told Al Jazeera that the move to suspend aid does not appear to be linked to any development in Egypt-US relations, especially since the Bright Start military exercises will officially resume.

“If the cuts do go ahead, it might be because the US either wants to send the signal about ‘the worsening human rights situation in Egypt’ or, more simply, because the Trump administration does not see the Congress accepting to disburse the aid money,” explained El Amrani.

“If intended as a signal to Sisi’s regime, it will have limited impact on [his] behaviour. But it does send an important signal more broadly that the US is recognising the alarming state of human rights in Egypt and not adopting the regime’s line, even if it continues to have a close military relationship,” El Amrani added.

Egypt, which is preparing for the upcoming presidential elections in 2018, has been under a state of emergency since last April. Amid a media blackout, Sisi, who is widely expected to run for a second term, has been repressing potential presidential candidates, such as prominent lawyer and human rights advocate Khaled Ali.

When former Egyptian President Mohamed Morsi was overthrown by Sisi in the summer of 2013, public space in Egypt became increasingly restrictive. Since coming to power in 2014, Sisi’s government has imprisoned tens of thousands of Egyptians without charge and banned public protests by passing legislation prohibiting the gathering of 10 or more people, without prior authorisation.

According to analysts, the move will not necessarily alter Sisi’s behaviour concerning human rights abuses, which are regarded to be in direct contravention of democratic norms.

“It [the move] might have some restraining effect, but since the presidential election is looming and the economy is in wretched condition, he [Sisi] will continue to repress opposition,” said Springborg.

Others believe that the US move has little to do with human rights abuses.

“If the Trump administration truly wanted to send a strong signal to Sisi’s government on human rights, they could have used the authority in the law to cut (instead of delaying) this $195m in military aid to Egypt,” said Bockenfeld.

Regardless, analysts believe that the move will soon be reverted.

“The one thing we do know for sure is that Trump does not care about human rights – at home or abroad – and the State Department is therefore unlikely to have been directed by the White House to cut off the funds,” James Gelvin, a professor of Middle East history at the University of California, Los Angeles, told Al Jazeera.

According to Gelvin, an underlying reason may be the “current dysfunction in the State Department”, given the large number of senior positions that remain vacant.

“The money will be restored after the United States certifies that Egypt is making progress on human rights,” said Gelvin.

“That certification will undoubtedly occur, whether such progress is made or not.” 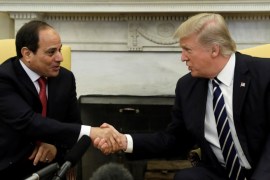 Donald Trump says US is ‘very much behind’ Egypt’s Sisi 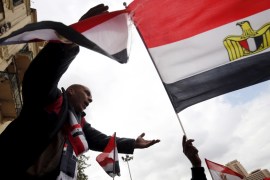