Nashville, United States – If you were there, then you know what all the hype was about.

Anyone fortunate enough to have witnessed Monday’s solar eclipse should understand why some of us are still thinking about it days later.

With nearly two million residents, Nashville was the largest city in the path of totality. By the time our trip was confirmed, all hotel rooms in and around the area had been booked solid. We tried renting an RV, but even that proved impossible. So we ended up at a nice little house in East Nashville that we found on Airbnb.

More than a million visitors are said to have added to the crowds in Music City that weekend. We met people from as far as Europe and East Asia during our short visit who came specifically for the eclipse. Countless others had driven in from all over the United States.

We wanted to be in a busy but open location, so on Monday morning we headed straight for Bicentennial Park near downtown Nashville. The organisers of the annual Italian Lights Festival had rescheduled their event to coincide with the eclipse. We were one of the first ones there, but thousands more ended up joining us.

I stood in line to get my solar glasses with everyone else. Although some had come prepared with all the right gear to photograph or film the solar show, most of the people at the park were just there for the experience.

The sky had been perfectly clear all morning, so we all baked in the sun. But as noon approached, ominous clouds started forming in all the wrong places.

At one point, a thick wall of grey and white cooled us down and tempered our expectations. But luckily the clouds began breaking up at just the right moment, and we were able to see the moon start chipping away at the other star of the show.

Since I was working, I couldn’t focus too much on photography. But I tried my best. All I had was an infrared filter that I used with great caution to avoid ruining my camera sensor.

Over the next 89 minutes, as we got closer to the total eclipse of the sun, the clouds were in and out of our way. Despite threatening to ruin the experience, they only added to its magic.

When the time came, everything was just in the right place. The clouds acted almost like curtains, and there was a collective gasp as we were treated to the spectacle of a lifetime.

The world seemed to be on pause for the next couple minutes. A peaceful moment of darkness like none other.

No words – or pictures – can accurately describe it. Some have tried with mixed results; however, I won’t be one of them. All I will say is that it’s something I want to experience again and again. I can now understand the people who run around the world chasing eclipses. After experiencing one myself, it’s hard not to.

I unscrewed my IR filter and haphazardly fired off a few shots with my camera as I made every effort to take it all in.

At one point, I had to divert my attention and troubleshoot another shot. Our live broadcast capabilities had been overwhelmed by all the mobile phone traffic as spectators did their best to share the experience with their loved ones and with others on social media.

I got back in position to see the clouds breaking up ever so slightly, revealing the third phase of the eclipse. Dark slowly turned back to light and it was time to put those protective glasses back on. But most people quickly cast them aside and started packing up their things. The main event was over and life returned to normal.

I peeked up at the sun a few more times with my glasses, but I didn’t bother taking too many more pictures. While I’m relatively happy with the ones I was able to get, they don’t begin to do justice to everything I experienced earlier this week.

Not everyone was so lucky though. The clouds didn’t clear for everybody, and many more weren’t able to make the trip in the first place.

Fortunately for everyone who missed out, there will be another chance in 2024. Like so many others, I’m already starting to make plans for that one and I encourage others to do the same.

Is it all worth the hype? Absolutely. 100 percent. Without a doubt. 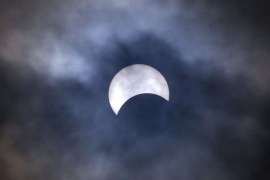 A total eclipse of the States

Americans are gearing up for a coast-to-coast total eclipse that can be seen within driving range of 200 million people. 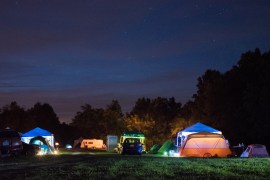 While Americans gazed in wonder as the moon blotted out the sun, Pagans marked the occasion in their own unique way.