Las Claritas, Bolivar state, Venezuela – The health clinic in the mining town of Las Claritas has broken windows and a sign informing patients that “malaria treatments are not available until further notice”.

Jose Grifon sits on the ground a few metres from the clinic’s door, his pallid face full of desperation. His friend sits silently beside him, his head between his knees, his body shivering.

“I’ve had malaria 40 times already,” says Grifon, coughing. The 22-year-old miner has experienced so many relapses because proper treatment is difficult to come by.

“It’s stuck in my kidney,” he says, referring to the symptoms of renal failure he has experienced as a result of the disease.

Worldwide, malaria has affected 212 million people, according to the latest figures from the World Health Organization, with a mortality rate of nearly 30 percent.

According to some reports, 18 of Venezuela’s 23 states are experiencing an outbreak. Ironically, the country was the first in Latin America to declare itself malaria-free in 1961, but the current outbreak is spiralling out of control.

Grifon, who grew up on the Caribbean Margarita Island off the northern Atlantic coast, has been working in the illegal gold mines in the south of the country for a few years now. And, just like many of his fellow miners, he has contracted malaria.

The life-threatening illness spreads to people through the transmission of a parasite by mosquitoes.

“I’m already waiting six days for medicines,” complains Grifon. “Bone and headaches, fever, dizziness, diarrhoea, everything, but still waiting, what else can I do?” he asks while listing the common symptoms that afflict those who have been infected. If not treated promptly, the infection can lead to death.

In the first 27 weeks of this year, doctors estimate that more than 150,000 of Bolivar’s two million inhabitants contracted or had a relapse of malaria.

In comparison, in the entire year of 2016 there were 242,976 cases of malaria, according to the Venezuelan Society on Public Health: a historic peak, but nothing compared with this year’s prospects.

The non-governmental organisation predicts that nearly one million Venezuelans will be infected this year – more than three times the number of people infected last year.

An acute shortage of medicines has left the sick at great risk since an economic crisis swept the country and led to widespread and deadly protests.

In March this year, Venezuela’s President Nicolas Maduro even asked the UN for “help” to receive medicine supplies to alleviate the crippling shortages.

“I’ve asked for support from the UN to help treat economic and social injuries that have hit our people, caused by the economic war and the sharp fall in petroleum prices,” Maduro said in a televised appearance.

With proper measures, preventing the spread of malaria should not be difficult, says Marianella Herrera, the director of the Venezuelan Health Observatory, but these are lacking in the crisis-stricken country and a combination of several factors has ensured the continued spread of the disease.

The shortage of medical supplies in places such as Bolivar state and the fact that the number of cases is underreported as a result of the failing system creates an environment conducive to the spread of infection.

Furthermore, she explains, the country’s population is more vulnerable to malaria due to being malnourished as a result of food shortages, which weakens the immune system.

At risk of infection

Herrera warns that neighbouring countries may be at risk of infection if proper preventative measures are not taken soon as desperate Venezuelans will seek to cross the borders in search of “medical attention and medicines that are not available in Venezuela”.

Dr Oscar Noya, director of the Center of Malaria Studies and researcher at the Institute of Tropical Medicine and associate professor at the Central University of Venezuela, agrees.

“In this moment there is an autochthonous transmission in all states of the country,” he says.

This means the infection is spreading from person to person through mosquitoes that bite an infected individual and spread the parasite to another.

Noya says there is also a “[significant] exchange of [transmission] cases at the borders with Brazil, Colombia and Guyana”. 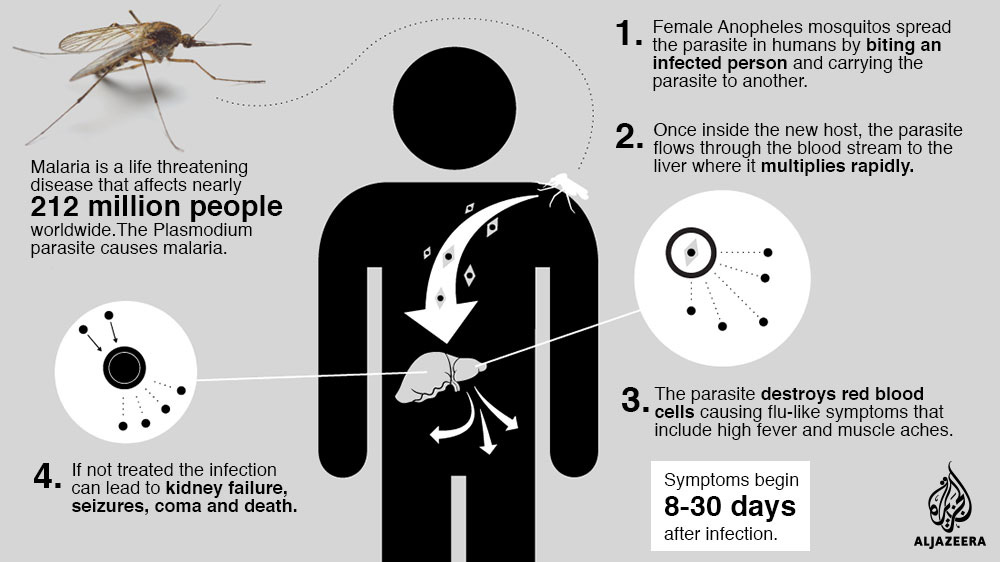 One medical researcher concurs that the shortage of medicines is contributing to the spread of the disease.

She has requested to remain anonymous because she fears retribution from the government for discussing the problem with the press, siting the example of Venezuela’s former health minister, Antonieta Caporale, who reportedly lost her job after communicating child mortality statistics to the press in May this year.

The researcher, who works at a local health centre in Bolivar state, also points to another major factor that has played a key role in the infections – illegal mining.

She explains that the mines serve as incubators for mosquitoes as large swaths of jungle are cleared and the mining pits fill with stagnant water, providing an ideal breeding ground for mosquito larvae.

An estimated 250,000 people try to make a living through illegal mining in Venezuela, according to local media reports. In Las Cristinas, thousands of them sleep in makeshift shacks or on hammocks in the open air with no way to shield themselves from mosquitoes.

In another mining settlement in Bolivar state, Tumeremo, more than 150 infected people line up every day in front of a clinic waiting for medicines to arrive.

On most days, there isn’t any. If, on a lucky day, medicines are available, the clinic runs out in 10 minutes.

The high demand for the malaria medicines has created ideal conditions for black-market dealings to thrive.

While the clinic hands out the medicines free of charge when they are available, they often end up on the black market where miners are forced to pay one or two grams of gold for the cure.

The Venezuelan Society of Public Health estimates that the 14 different medications from the World Health Organisation to treat the parasites causing the spread of the disease in Venezuela would cost $4m.

This would suffice for a year and would also control the spread of other parasitic diseases.

The two medications used to treat malaria, primaquine and chloroquine, are very rarely available in Venezuela.

They work together to clear the body of the parasite: primaquine cleans the bloodstream and liver, and prevents relapses, while chloroquine eliminates the parasite from the blood.

One doctor working in Bolivar state, who also prefers not to be named, says he is not surprised that malaria spreads so fast in mining regions.

“The frontier between man and mosquito does not exist anymore,” he says.

Tumeremo is an inconspicuous small regional town, but gained notoriety when 28 miners disappeared there in March and are thought to have been killed in an act of violence allegedly linked to local gangs and local security forces.

Every day recently arrived miners are transported from Tumeremo to the nearby illegal mines.

Many are not professional miners and have a difficult time getting along with the armed gangs, called pranes, and the security forces that control organised crime and mining in the region, respectively. But the relationship is intertwined.

Americo de De Grazia, deputy to the National Assembly for Bolívar state, says that in spite of the appearance that the military is actively battling the pranes, the government forces are actually propping up the local gangs.

“You have the military, the military has operators, called pranes, and the pranes have miners, they have mines,” he says. The pranes are agents of “retention”, says de Grazia. “Miners pay them and they pay the military on their turn.”

Las Claritas is one of the few places in Venezuela where people can still be seen openly walking around with stacks of cash and smartphones.

Crime rates are high in Venezuela, and Caracas, the capital, has one of the highest murder rates in the world at a reported 130.35 homicides per 100,000 residents. But Las Claritas has its own curious kind of security.

He was a construction worker before, working in the state capital, Puerto Ordaz. But he went to the mines when the economic crisis left him without work.

Salazar works with a batea, a wooden washing board. Because he doesn’t make much profit, he is not forced to pay a commission to the armed gangs, he says.

Las Cristinas, the town where Jose Grifon lives, is a few hours’ drive south of Tumeremo amid jungle wastelands pockmarked with mines.

Mining takes place around the clock here. Gold resellers and shops with mining equipment are found on every street.

The town bustles with movement, honking pick-up trucks and boisterous miners gathered around corners and alleyways.

Even at night, people look for gold in the mines. On a street corner, two men, no older than 20, use a gas burner to separate mercury from gold in an iron bowl, ignoring the toxic fumes emanating from the flame.

Meanwhile, malaria infections keep spreading through the mines and their toxic environment to the urban centres of the country.

“It is already happening. There is malaria now even in urban areas,” says Phillip Gunson, an International Crisis Group analyst in Venezuela.

He thinks the worst is still to come. “The government’s anti-malaria programme has effectively been dismantled, with much of the material [mosquito nets, prophylactics etc] simply stolen or diverted to the black market. NGOs trying to cope with the spread of malaria have been forced out. Control is in the hands of the army and of armed civilians often linked to the state government.”

In the meantime, sick miners such as Grifon continue their wait for medicines in the under-resourced health centres in the south of the country.

Noya, the doctor, says the involvement of state elements that benefit from illegal mining makes the work of the health sector impossible.

“This limits and weakens the campaigns of the Ministry of Health,” the doctor says.

If left untreated, the disease can cause death, with a higher mortality rate among pregnant women and children. 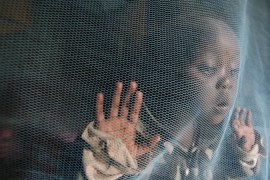 Where is the money for malaria?