Gaza has been the focus of intense talks behind closed doors in recent weeks as disquiet has risen among Arab states at the humanitarian crisis unfolding in the coastal enclave.

Palestinians there are enduring a scorching summer with barely a few hours of power a day, after Mahmoud Abbas‘ Palestinian Authority (PA) has refused to finance essential services. Abbas is trying to weaken his Hamas rivals who rule Gaza and assert his own authority.

In the background, an ominous deadline is rapidly approaching. Gaza is expected to be “uninhabitable” within a few years, according to United Nations forecasts. Its economy has been broken by years of Israeli military attacks and a joint Israeli-Egyptian blockade, its population is mostly destitute, and its aquifers are increasingly polluted with sea water.

Gaza’s rapidly growing population of two million is already suffocating in a tiny patch of territory. In May, the International Committee of the Red Cross warned that Gaza was on the brink of “systemic collapse“.

Israel has good reason to fear the future. Another round of fighting with Hamas, and heavy casualties among ordinary Palestinians, will further damage its image. And sooner or later, ordinary Palestinians are likely to rise up and tear down the security fences that imprison them.

For that reason, Israel and its patrons in Washington – as well as the Arab states – are desperately in search of a remedy.

It is in this context that Palestinians have been pondering the significance of a series of recent secret meetings between Egypt, Hamas and Mohammed Dahlan, an exiled Fatah leader and enemy of Abbas. Are they paving the way to a permanent solution for Gaza – and one that will be largely on Israel’s terms?

One possibility – known to be much-favoured by Israel – would be to engineer the creation of a Palestinian state in Gaza and then pressure Egypt to allow it to expand into the neighbouring territory of northern Sinai.

According to this plan, not only would most of Gaza’s population end up in Sinai, but so too would potentially millions of Palestinian refugees.

Atef Eisa, a journalist in Gaza City, told Al Jazeera that the meetings between Egypt, Hamas and Dahlan were the main topic of discussions in the enclave: “People understand that Israel wants Gaza permanently separated from the West Bank. They wonder whether Sinai might be a way to achieve it.”

Suspicions of a Gaza-Sinai state are not new. In fact, there is strong evidence that Israel has been pushing aggressively, along with the United States, to create a Palestinian state in Sinai since it withdrew its soldiers and settlers from the Gaza Strip more than a decade ago.

Now rumours are circulating that the Sinai plan is being revived. Are the stars aligned for Israel? The US administration of Donald Trump is openly on its side, Hamas is at its weakest point ever, and Israel is increasingly close to Egypt and Saudi Arabia.

“There is no doubt that this is what Israel would like to see happen,” Shawqi Issa, a Palestinian analyst and former government minister in the PA, told Al Jazeera.

Issa believes Israel is now firmly set on turning Gaza into the Palestinian state, as part of a regional solution that might also see the Palestinian cities of the West Bank, currently in Abbas’ charge, ultimately falling under Jordanian responsibility.

But such a regional solution – what Israel calls its “outside-in” strategy – hinges on Egyptian help. “The chief difficulty with the Sinai option is allaying Egyptian concerns,” said Issa. “Israel and the United States can manage it only as part of a dramatic reshaping of the entire Middle East.”

The plan requires Cairo to accept a humiliating compromise of its sovereignty by surrendering territory in Sinai, possibly in a swap for Israeli land in the Negev. It would also undermine long-standing Arab demands that a Palestinian state be realised in historic Palestine.

But most importantly, the military regime of Abdel Fattah el-Sisi is concerned about an expansion of Hamas’ influence into Sinai, strengthening support for Egypt’s Muslim Brotherhood, Hamas’ sister organisation and the main opponents of Sisi’s rule.

However, the extent of Egypt’s opposition is far from clear, especially given that it may be facing stiff pressure from the Trump administration and the Saudi-led Gulf states to alleviate Gaza’s problems.

In fact, Israeli media reports in 2014 suggested that Sisi may have agreed to cede 1,600sq km in Sinai to Gaza, expanding the enclave’s size fivefold. This would have realised Israel’s vision of a demilitarised Palestinian state it calls “Greater Gaza”.

Abbas is reported to have rejected the plan outright.

Not surprisingly, both Egyptian and Palestinian officials publicly denied the reports. Nonetheless, Abbas and his officials subsequently appeared to corroborate some aspects of the story.

At a meeting of Fatah loyalists in August 2014, Abbas reportedly said that a “senior leader in Egypt” had told him: “A refuge must be found for the Palestinians and we have all this open land.”

A week earlier, he told Egyptian TV that the Israeli plan had “unfortunately been accepted by some here [in Egypt] … Don’t ask me more about that. We abolished it.”

Abbas was unclear about whether these were references to Sisi or his predecessor, Mohamed Morsi, who briefly headed a Muslim Brotherhood government before being removed by the Egyptian military.

At the same time, a report in the London-based Arab newspaper Asharq Al-Awsat indicated how long the Sinai plan may have been gestating. An aide to Hosni Mubarak, the Egyptian president until he was toppled in 2011, quoted the former leader as saying: “We are fighting both the US and Israel … In a year or two, the issue of Palestinian refugee camps in Sinai will be internationalised.”

Indications that the Sinai plan may have been revived at a high level have come from Ayoub Kara, a government minister and ally of Israeli Prime Minister Benjamin Netanyahu.

In February, shortly before Netanyahu and Trump met in Washington, Kara tweeted that the two leaders would “adopt the plan of Egypt’s Sisi. A Palestinian state in Gaza and Sinai”.

Kara added that this would provide a regional solution of the kind Netanyahu and Trump officials have recently been talking up: “This is how we will pave a path to peace, including with the Sunni coalition [of Arab states].”

Egyptian officials again issued hurried denials. But Kara’s statements prompted so much alarm that a group of prominent Egyptian lawyers filed a suit against any moves by Cairo to resettle Palestinians in Sinai.

In what could be seen as a territorial precedent, the Egyptian parliament approved last month the transfer of two islands, Tiran and Sanafir, to Saudi Arabia in return for billions of dollars of investments in Egypt’s ailing economy.

There are good reasons why Israel may believe all the pieces are falling into place to realise a Palestinian state mostly outside the borders of historic Palestine.

Hamas is at its lowest ebb ever, with Israeli officials speaking of the movement “fighting for its life”. After Egyptian and Saudi-led moves to sideline Qatar and Turkey’s support, Hamas is now all but friendless.

The carrot for Hamas of a Greater Gaza would be the chance to rule a much more substantial piece of territory, solving the enclave’s humanitarian crisis and rehabilitating the Islamic movement in the eyes of the international community.

Naji Shurrab, a political scientist at Al-Azhar University in Gaza, told the Jerusalem Post newspaper that the creation of a Palestinian state in Gaza would be the first step. But he believed territory in Sinai would be included too, once Egyptian security concerns had been addressed.

Israel has all but gone public with its close security ties with Egypt and the other key regional Arab state, Saudi Arabia. The two share Israel’s concern about curtailing Iran’s influence in the region and appear to be prioritising that alliance over the Palestinian cause.

Indications are that the White House is engaging in vigorous shuttle diplomacy with Saudi Arabia, Egypt and Jordan to help with what Trump has called the “ultimate deal” for peace.

What of Abbas, who has previously rejected the Greater Gaza plan?

He is much weaker than he was a few years ago and has alienated Saudi Arabia and Egypt with his continuing bitter feud with Mohammed Dahlan, his key rival within the Fatah movement and the man the Arab states would like to see succeed him.

Dahlan has been living in exile in Dubai, in the Gulf, reportedly channelling money from the United Arab Emirates into Gaza and the occupied West Bank to buy popularity and political influence. There are long-established suspicions that Dahlan is close to officials in Washington, too.

In fact, Dahlan is rapidly emerging as a pivotal figure, promoted by Riyadh and Cairo. Could he be the key to unlocking the Greater Gaza plan?

Over recent weeks, a series of secret, three-way meetings between Dahlan, Hamas and the Egyptian security figures have been trying to devise a new power-sharing arrangement in Gaza.

Reports suggest that Egypt will agree to reopen Gaza’s Rafah crossing into Sinai if security is overseen by Dahlan loyalists rather than Hamas. According to some reports, Dahlan may even become prime minister of Gaza, with Hamas leaders serving under him.

Hamas has been trying to prove its good faith by creating a buffer zone inside Gaza to prevent fighters with the Islamic State of Iraq and the Levant (ISIL, also known as ISIS), who have targeted Egyptian soldiers in northern Sinai, from using tunnels to find sanctuary in the enclave. “These measures serve as a message of assurance to the Egyptian side,” Tawfiq Abu Naeem, Gaza’s head of security services, told reporters.

What is slowly emerging looks suspiciously like a “Gaza state” project.

This arrangement could reassure Egypt and Israel that Hamas’ influence can be contained and that the movement may even be able to help in the fight against ISIL. A strong Dahlan would be expected to restrict Hamas efforts at arming, prevent rocket fire on Israel and block any alliance with Egypt’s Muslim Brotherhood.

Assuming the model is successful, and with Abbas likely to be out of the picture soon, the Sinai plan could be properly unveiled with Dahlan and Hamas maintaining order in a Palestinian state in northern Sinai, sponsored by Saudi Arabia and Egypt.

All of this could be sold to the watching world as a supremely humanitarian gesture – to end the suffering of Palestinians in Gaza and the region.

The question remains, however, whether Israel and the US can pull it off. 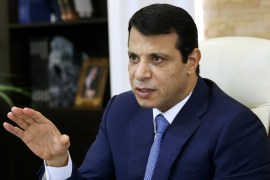 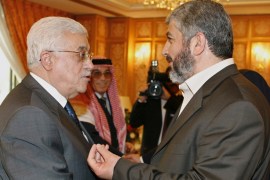