A half-century ago America changed forever. For better or worse, Detroit has been at the centre of the nation’s change for twice that time.

In the early 20th century, Detroit’s economy boomed as the “Motor City” drew hundreds of thousands of workers to the automobile factories that made American industry the envy of the rest of the world and one of the greatest centres of wealth in human history. As those autoworkers organised and engaged in militant strikes, Detroit’s labour movement established a national standard of wages and benefits that elevated millions of white Americans and European immigrants into the middle class.

This was the “American Dream” in action. Why, then, did the city explode on July 23, 1967, in one of the biggest urban rebellions the United States has ever seen?

Three key issues dividing the nation in 2017 – racial discrimination, police brutality, and economic dislocation – began to tear apart dozens of its cities during the 1960s. In Detroit, when the dust settled and fires smouldered after more than four days of heightened unrest, 43 people were dead, over 7,000 more were arrested, and scenes of 17,000 police and military occupying the streets gave the appearance that the city was a warzone.

As racial oppression has deep roots in US history, the struggle for civil rights and racial equality began decades before the 1960s. The Detroit uprising, nevertheless, marked a dramatic turn in the battle over alternative futures, and it was central to an overall pattern of social rebellion, anticolonial revolts, and global uprising of the oppressed in 1967-68. In the last year of his life, Martin Luther King Jr broke his silence over the Vietnam War and emphatically declared that “the nation must undergo a radical revolution of values” to conquer “the giant triplets of racism, extreme materialism, and militarism”.

It is an understatement to say Detroit has never been the same since 1967.

Whites were already fleeing to new homes in the suburbs, where federal funding supported new construction and subsidised mortgages. This process of “white flight” – accompanied by an exodus of jobs and investment – accelerated after the rebellion, turning Detroit into a national symbol of racial segregation and a widening economic chasm.

Many of those who fled Detroit did not hesitate to state that the “riots” ruined the city. They are now likely to favour the city’s current “comeback”, driven by white billionaires focused on gentrifying downtown and the imposition of an autocratic emergency manager that stripped away black voting rights and political representation won from the struggles for civil rights and black power.

In this way, Detroit offered a preview of the conservative movement to “make America great again.” Nostalgia for the city’s so-called golden age before 1967, however, overlooks a plethora of inconvenient truths about pervasive and long-standing patterns of injustice in Detroit and America.

As historians Sidney Fine and Heather Ann Thompson have pointed out, the Detroit Police Department remained less than three percent black through the 1950s and reached only five percent by 1967. The city’s police commissioner reported that 90 percent of the city’s cops were “bigoted.”

They subjected African Americans to humiliating and stop-and-frisk searches and routinely beat suspects to enact justice through the “alley court”.

Corruption was rampant within the ranks and led to shakedowns that particularly heightened the abuse of black women sex workers. As city leaders refused the consistent demand for a civilian review board, police misconduct was rewarded and reinforced through the racism and corruption among prosecutors and judges.

Most of the 43 people who died during the riot were killed by the police or National Guard.

Whites lived in an alternate reality from African Americans when the subject of race was broached in general, but especially when the focus was on policing.

Roughly 80 percent of whites in Detroit considered the police to be fair and unbiased. However, then and now, a better way to assess fairness in these situations would be to conduct a societal version of the “divide and choose” cake-cutting process: one side gets to cut the cake but does so knowing that the other side will choose first.

In the case of Detroit and dozens of other cities, white America shaped the nation’s economic and political structures. They did so knowing that they were also defining the role race would play in structuring opportunities and privileges. In other words, whites, especially wealthy and elite whites, got to metaphorically cut the cake and pick the slice they wanted. The movements of the 1960s exposed this double standard.

The language of the unheard

Recognising that “a riot is the language of the unheard,” Martin Luther King Jr lamented “that large segments of white society are more concerned about tranquillity and the status quo than about justice and humanity.”

While he denounced looting and violence, he simultaneously stressed the need to condemn the “intolerant conditions” that left many with “no other alternative than to engage in violent rebellions to get attention.”

As Detroit’s rebellion unfolded, President Lyndon B Johnson was forming a bipartisan National Advisory Commission on Civil Disorders to study the “civil disorders” and issue recommendations for a new way forward. The commission’s call for “unprecedented” social investments to bridge the nation’s divisions was largely ignored, even by the president himself. Detroit was increasingly mocked or forgotten by the rest of the nation. The rebellions and the progressive movements of the 1960s sparked a right-wing backlash driven by a politics of fear.

The national call for a “war on poverty” became a “war on crime.” Mass employment was replaced by mass incarceration, especially within majority black and nonwhite cities like Detroit. Detroit’s poverty rate was estimated to be 16 percent in 1967. In 2015, the US Census placed it at 40 percent.

The sad reality is that the social and political disasters millions of Americans fear from authoritarian, one-party rule in 2017 have probably already beset Detroiters.

For this reason, however, Detroit was at the forefront of the “resistance” long before Donald Trump became president. Today, as a half-century ago, it behoves us to keep our ear to the ground and identify the sources of hope and change.

Scott Kurashige is a professor at the University of Washington Bothell. This article has been adapted from an excerpt in his book The Fifty-Year Rebellion: How the US Political Crisis Began in Detroit (University of California Press, 2017). 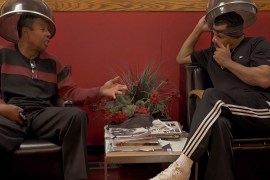 Robert and Larry keep the spirit of ‘Motown’ alive in their barbershop despite the city’s decline. 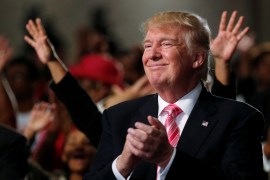 US election 2016: Trump on charm offensive in Detroit

Republican presidential nominee says he wants to help rebuild Detroit as he pursues black voters ahead of election. 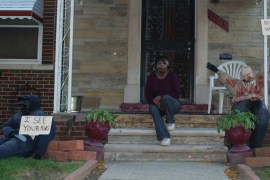 Grandmother replaces traditional decorations with real-life horrors in protest against violence and injustice.