Ramallah, occupied West Bank – At the southern end of Clock Square in Ramallah, a hub for political protest in the de facto Palestinian capital, a small crowd of supporters and local news teams had gathered to hear a former prisoner speak.

Flanked by fellow ex-detainees, as their wives and children watched on from under a green tarpaulin, Mansour Shamasneh railed against the Palestinian Authority’s (PA) decision to stop paying monthly salaries to the families of about 260 current and former prisoners.

“This decision will affect mothers, children and fathers sitting in the street,” he cried, his arm sweeping across the crowd.

Shamasneh is one of a dozen former detainees who have decided to publicly protest against the salary cuts by camping out in downtown Ramallah. The set-up is rudimentary. A white tent has been pitched over a stretch of dirt where a few single mattresses are spread on a canvas sheet. The main ‘reception area’ is more exposed to the elements, with two dozen plastic chairs shielded from the summer sun by a flimsy tarpaulin roof. There are no bathrooms, so the men cross the street to a nearby mall to wash.

They moved to the central square after they were removed from their initial protest site, outside the office of the prime minister, by PA security forces in late June. They say they were told at the time that the prime minister had got the message and that the protest was not appropriate, but three weeks after they began the sit-in, they had yet to receive any information from the PA about the sudden salary cut.

“I went to the bank to cash my salary and they told me I had no money,” Shamasneh told Al Jazeera. “When I checked, I found that the payment had not been made and that my account was minus 3,500 shekels ($980). I have monthly payments going out of my accounts and they continued as normal. They cannot be stopped.”

Shamasneh, who studies at Al Quds university and has a young family, told Al Jazeera that the monthly 5,000 shekel ($1,400) payment was their only source of income.

“Even when I cash the salary it is not enough for my family,” he said. “We spend it all within two, three weeks. I have loans. I bought furniture which I have to pay for in installments. I have to pay for my studies and I have two kids, a wife and a house as well,” he said.

“I’m really worried because I have to pay off loans in installments, and now I cannot pay the cheques. It is difficult to even survive. If they take me to court, they will arrest me for a criminal reason because my cheques will be rejected,” Shamasneh added.

According to the Palestinian Prisoners’ Club, a local non-governmental organisation that advocated for prisoners’ rights, a total of 277 ex-prisoners did not receive their monthly salaries in May. The vast majority of those affected were affiliated with the Gaza-based Islamic resistance movement Hamas at the time of their arrest and were released during the 2011 prisoner exchange for the Israeli soldier Gilad Shalit.

As of July, salary payments had resumed to those who were affiliated with other factions, leaving around 260 former and current Hamas-affiliated prisoners and their families without an income source.

For Leila Shalash, a mother of four whose husband Ibrahim is currently in prison, the 6,000-shekel monthly salary was her only source of income. Ibrahim was released in the 2011 exchange but was then re-arrested in 2014 during a widespread Israeli crackdown on Hamas supporters in the West Bank.

“I was shocked when I heard the payment had been stopped,” said the mother of four.

“I have many responsibilities. Firstly, there is the house, which is not finished yet. My children are studying and need money to continue their work. And then there is daily life. The family needs money for normal things – food, electricity, water. All of this costs money,” she said.

“I am asking the PA to begin repaying the salaries because my husband has sacrificed his life for the homeland, for Palestine, and we cannot continue our lives without this salary.”

The decision to suspend the payments also surprised the head of the Palestinian Prisoners’ Club, Qadura Fares, who has begun negotiations on behalf of the affected prisoners in jail and those based in occupied East Jerusalem and the West Bank, but not on behalf of those residing in the besieged Gaza Strip or outside the Palestinian territories.

“We tried to find out who was responsible for this decision and until this moment we do not know who is responsible,” Fares told Al Jazeera, adding that payments for ex-prisoners are guaranteed by Palestinian law.

“They have to give them back their rights because this is a right under the law,” he said. “It’s a law like any other law.”

The decision taken in early June coincided with explorations by US President Donald Trump’s administration of the possibility of reviving talks between the Israeli and Palestinian leaderships. The Israeli side has called publicly for the PA to halt payments to Palestinian prisoners and former detainees, arguing that the system encourages Palestinians to commit violent attacks.

A number of the ex-prisoners camping out in the square believe that the decision to cut the salaries came as a result of US and Israeli pressure on the PA, but Fares told Al Jazeera that it was part of the intra-Palestinian dispute between Hamas and Fatah, which dominates the PA.

“It’s not part of any political process,” he said. “It’s an internal decision. It’s a part of the pressure they [the PA] tried to create on Hamas in Gaza,” said Fares.

In recent months, the PA has escalated punitive measures against Hamas in an effort to force the movement to cede control of the Gaza Strip to a consensus government.

Among the measures taken against the group, the PA has slashed the wages of its Gaza-based civil servants and has stopped paying for some of the electricity supplied to Gaza via Israel, reducing the number of hours of electricity in the coastal territory to three to four hours per day. 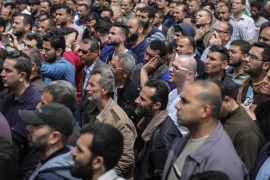