He was held in psychiatric confinement for 21 days. During this time, Umerov, 59, who also suffers from diabetes and Parkinson’s disease, was denied medication, causing his health to deteriorate rapidly.

“On the fourth day, he fainted and even then the psychiatrists did not give him any medical attention. When he was released his health was very bad and [it] took several weeks for him to recover,” Ayshe Umerov, his daughter, told Al Jazeera.

Umerov was kept in a room with about 20 other patients who suffered from serious mental health disorders.

“I was told by psychiatrists, ‘You just need to admit that you’re wrong, and everybody will stop bothering you,’ It’s as easy as that,” Umerov told Russian journalist Anton Naumlyuk during an interview in the psychiatric ward.

“Patients are often denied access to a bathroom and are fed at intervals of up to 17 hours,” said Emil Kurbedinov, one of Umerov’s lawyers and a 2017 recipient of the Front Line Defenders Award for his work with Tatars in Crimea. According to Ayshe Umerov, neither she nor lawyers were allowed to see her father in the first week of his confinement.

Human rights activists Robert van Voren, director of the Federation Global Initiative on Psychiatry (FGIP), and Halya Coynash from the Kharkiv Human Rights Protection Group point to Umerov’s case and dozens of others to highlight what they call the re-emergence of punitive psychiatry, a practice widely used during the Soviet era.

Months before his detainment, Russian security forces had opened a criminal investigation against Umerov on charges of “separatism”.

As the former head of Crimea’s Bakhchisaray district, Umerov has been a virulent critic of the Russian occupation in Crimea since its annexation in March 2014.

“We must force Russia to withdraw from Crimea … Ukraine should adopt several laws on the status of the Crimean Tatar people, and amend the constitution,” Umerov told the Crimean Tatar channel ATR last March. He claims that his words were taken out of context.

“I didn’t make any calls to violate the country’s territorial integrity. I was speaking about the necessity to increase sanctions, which would make Russia return Crimea to Ukraine,” Umerov told the Supreme Court in Crimea.

Umerov’s father, Rustem, was one of the survivors of Stalin’s forced eviction of the Crimean Tatar population in 1944. Most of those who survived the arduous journey – around 46 percent – ended up in Central Asia.

It was in the Uzbek city of Jizzakh where, at the age of 16, Umerov was first noticed by the KGB. He was disseminating leaflets to the public that urged Crimean Tatars to “speak out”.

He has since had a long and successful career in politics, rising through the ranks to become one of the first Crimean Tatars to become deputy prime minister of Crimea, serving from 1994 to 1997.

Umerov’s detention sparked international outrage. Human Rights Watch called it “a shameful attempt to use psychiatry to silence him and tarnish his reputation”.

While Umerov’s detention has been a focal point, rights groups and others have found that dozens of activists have faced punitive psychiatry over the past five years.

A report published in April by the FGIP, an NGO that monitors human rights in psychiatry, documents more than 30 cases from 2012 until April 2017 in which human rights activists and journalists have been illegally detained in psychiatric institutions for up to 10 years.

“I think the real amount of cases is considerably higher than those cited in the report, based on my interviews with lawyers, psychiatrists and other human rights activists involved,” said van Voren, who, along with this reporter, is one of the three authors of the FGIP report.

Historically, when legal means of punishing a political activist had been exhausted, Russian authorities have turned to psychiatry as an alternative method of political repression.

In 1960s Soviet Russia, punitive psychiatry was used to incarcerate thousands of dissidents. During this time, the practice was unbeknown to the world beyond the “Iron Curtain”, the ideological and physical boundary that divided Europe from the end of World War II until the end of the Cold War.

“The available evidence shows that KGB Chairman Yuri Andropov, who in 1967 took the helm of that organisation, and a selected group of associates, developed the political abuse of psychiatry as a systematic means of repression,” van Voren said.

“KGB offices in other republics, like in Ukraine, received detailed instructions from ‘the centre’ on how to use psychiatry either as a ‘preventive measure’ or to remove a ‘hostile element’ from society.”

Punitive psychiatry was especially convenient because unlike a prison sentence, a hospitalisation term could be indefinite. A person was only released when he or she retracted the “wrong ideas” that first led to his or her confinement. In this way, psychiatric hospitals hoped to help realise the communist vision of a uniform society.

In Soviet times, mental health concepts were inextricable from political ideology. This is reflected in Soviet leader Nikita Khrushchev’s 1959 declaration.

“A crime is a deviation from the generally recognised standards of behaviour, frequently caused by a mental disorder … We can now say, too, there are people who fight against Communism … but clearly the mental state of such people is not normal,” Khrushchev said.

The FGIP’s van Voren, a professor of Soviet studies in the Ilia State University in Georgia, found that the “political abuse of psychiatry in the Soviet Union originated from the concept that persons who opposed the Soviet regime were mentally ill because there was no other logical explanation why one would oppose the best socio-political system in the world”.

In the 1960s, a disease unique to the USSR called “sluggish schizophrenia”, characterised by its slow onset, became a convenient framework for explaining all anti-Soviet behaviour. Symptoms included “anti-Soviet thoughts”, “delusions of reformism” and “infantilism”.

As a result, almost any behaviour that deviated from the norm could be attributed a psychopathological meaning.

A favourite adage of Georgi Morozov, the late Soviet psychiatrist, was: “It’s no secret to anyone that you can have ‘schizophrenia’ without having schizophrenia.”

Thousands were diagnosed with “sluggish schizophrenia” and sent to psychiatric hospitals because of their political views, where they were subjected to electroconvulsive therapy without anesthetic, large doses of antipsychotic medications and insulin comas. A Moscow investigative commission recorded about 2,000 political prisoners in five Russian hospitals alone.

Toward the end of the 1980s, when the Iron Curtain began to fall across eastern Europe, the secret of the practice leaked and led to the expulsion of Russia from the World Psychiatric Association.

Punitive psychiatry essentially ceased to exist in the 1990s, but since Vladimir Putin’s accession to the presidency in 2000, reported cases of it have resurfaced, leading many to believe that the Soviet-era practice has returned.

Despite the evidence, a number of Russian psychiatrists deny that psychiatry was ever abused. One state psychiatrist called accusations of its use “slander, which was [previously] used for anti-Soviet ends, but is now being used for anti-Russian ends”, writes Julie Fedor in Russia and the Cult of State Security: The Chekist Tradition, from Lenin to Putin (2011).

Today, as in Soviet times, rights groups and academics argue, however, that the psychiatric imprisonment of activists is thought to be a preventive measure, not just a punitive one.

Gerhard Mangott, a professor of political science at Austria’s University of Innsbruck, said that punitive psychiatry sends a “signal” to politically active citizens not to publicly criticise the authorities.

Many also argue that a label of mental illness is used to stigmatise the opposition, and prevent others in society from sympathising with their views.

WATCH: From Russia, not always with love

Russian officials in Crimea are also striving for this political conformity, Umerov has said.

“What the authorities want most is the population’s loyalty. I dare say that the Crimean people do not recognise the Russian jurisdiction in Crimea or the ruling authorities in Crimea,” Umerov said during an interview with the Ukrainian news outlet Hromadske last May, shortly before his arrest.

According to Umerov’s lawyer, Kurbedinov, a further 10 Tatar activists have been subjected to punitive psychiatry in Crimea since Umerov was held in August.

“The resumption of punitive psychiatry is closely linked to the deteriorating human rights situation in Crimea and the fact that lower-level authorities feel more freedom to clamp down on opposition than previously,” van Voren said. “The rule of law is increasingly being subject to political machinations.”

The author was a research assistant for FGIP during the collation of the April 2017 report and is one of its three authors. She extensively researched punitive psychiatry in Russia for her Master’s thesis at University College London. 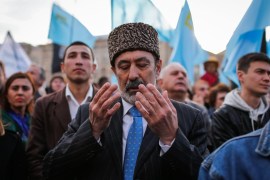 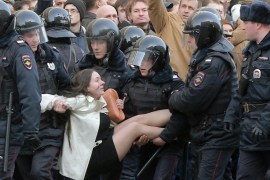