Sheung Shui’s transformation has come about through the growing business conducted by cross-border traders – also known as parallel traders – who make profits by purchasing goods in Hong Kong which are popular among mainland Chinese, and transporting them over the border for sale across China. The effects of this trade have been felt acutely in Sheung Shui due to its proximity to China. The town has become an unlikely tourist destination for mainlanders with one goal in mind: shopping.

Gradually, shops that sold daily necessities for local residents disappeared. The prices of the goods in demand in mainland China increased. Sheung Shui’s streets became dirty and littered with discarded cardboard boxes. Each day, traders wielding suitcases and trolleys, stacked with goods en route to mainland China, muscle their way through crowds on the road to the town’s train station.

But this is not the only change Sheung Shui has experienced in the past decade. Over the years, this once inconspicuous, sleepy border town slowly became the hub of many protests – and a hotbed of localism.

Ng Ka-leung is the director of the 2015 low-budget dystopian indie film, Ten Years, which was subsequently banned in China for its negative depiction of Chinese rule in Hong Kong.

Before the film thrust him into fame, Ng had been the producer of a lesser-known project – a series of documentaries named “Fading Marketplaces”. One episode focused on the Shek Wu Hui marketplace and neighbourhood, located in Sheung Shui.

Ng, who grew up in the area, said that only one of the stores featured in his documentary is still in business today.

His family, who owned an electronics appliances store in the neighbourhood for decades, were forced to close their shop last year.

Rising rents forced out small businesses unable to compete with pharmaceutical and other chains, especially since many landlords sold their properties to parallel trading businesses, Ng said.

This began in 2003 when new visa regulations allowed mainland Chinese from various cities to easily cross the border.

Leung Kam-shing, spokesman for the North District Parallel Imports Concern Group, an anti-parallel trading citizens’ group, said that factors such as the strengthening value of the Chinese yuan and the prevalence of counterfeit pharmaceuticals across mainland China started attracting an influx of tourists into Hong Kong.

Ng says that parallel trading swelled after 2008 when China’s melamine milk scandal drove troves of mainlanders to visit Hong Kong in the hopes of buying safe baby milk formula. It worsened in 2009 when Shenzhen residents living directly across the border were permitted to make unlimited trips to Hong Kong within a specified period under a multiple entry visa scheme.

‘Chinese people go back to China’

Leung has participated in anti-parallel trading demonstrations since they began. He was overwhelmed by the throngs of people he saw at Sheung Shui train station.

Almost every night after work, he joined a group of zealous demonstrators – numbering no more than 10 people – to chant slogans at the train station and keep residents informed. They often stayed until the border checkpoint closed for the day at midnight. The protesters later formed the North District Parallel Imports Concern Group.

In 2013, the Hong Kong government moved to curb parallel trading, implementing a law to impose a 1.8kg limit on powdered formula that could be taken out of the city. But the issues persisted, and Leung and his comrades continued their protests.

With the 2014 Occupy movement in Hong Kong, the demonstrations in Sheung Shui intensified, Leung said. These demonstrations, known as the “Reclaim” movement, later spread to other towns in Hong Kong’s New Territories region, such as Tuen Mun, Yuen Long and Shatin, which were also facing an influx of cross-border traders.

Clashes erupted between demonstrators, law officers, and cross-border traders. In early 2015, the police used pepper spray against protesters in Yuen Long and Tuen Mun. In one clash with authorities, a female protester was arrested for “assaulting a policeman with her breasts,” making international headlines. With anti-mainland China sentiments brewing, a new political ideology known as localism, which calls for a distinct Hong Kong identity, emerged.

The rise of localism

Catherine Ng, 24, a law school graduate and a recipient of the Global Youth Chinese Literary Award for a story she wrote about Shek Wu Hui, spent her formative years in Sheung Shui.

When she was younger, she participated in the annual candlelight vigils commemorating the Tiananmen massacre in 1989. Back then, the proximity with China fostered a sense of kinship with the mainland Chinese, she said.

Catherine even remembers waving flags to welcome the Chinese People’s Liberation Army procession into the city early in the morning on the day of the 1997 handover – when China resumed sovereignty over Hong Kong.

Catherine now identifies as a localist, those who call for the recognition of Hong Kong’s local identity and the control over their future, in face of increasing political and cultural encroachment by China.

While “Reclaim” was taking place in New Territories, elsewhere in Hong Kong, localism was slowly gaining momentum through a series of incidents. These included the push for “national education” which sparked brainwashing fears in schools and also birth tourism by mainland mothers looking to secure Hong Kong rights for their children.

But for many living in the more affluent areas, such as Hong Kong Island, the struggle with the mainland was mostly ideological, while others’ concerns revolved around the implications for business interests.

Here, however, on the northern front line of Hong Kong-China tension, there were physical manifestations.

“They don’t live here – they’re not the ones getting elbowed [in] the street every day,” Catherine said.

Many of Catherine’s secondary school classmates had been supporters of the pan-democrats, the milder opposition camp which harboured hopes that a “democratic handover” would be possible for Hong Kong.

In 2016, when localist candidate Edward Leung ran for a legislature seat in the New Territories East constituency, which Sheung Shui is part of, “Most of my classmates who used to be apolitical or more ‘rational’ turned to vote for Leung – even their parents,” Catherine said.

Although Leung did not win, he finished third and amassed 66,524 votes, or 15.4 percent, a milestone for the localism camp. During his election campaign, Leung’s team had made a point of visiting the Shek Wu Hui area in Sheung Shui.

After the election, Chinese University of Hong Kong politics lecturer Choy Chi-keung attributed Leung’s popularity in the North District – in particular in the areas of Shek Wu Hui and Choi Yuen Estate in Sheung Shui – to the serious cross-border trading problem faced by these two locations, as well as their high proportion of young voters.

Despite all this, localism is still not a mainstream ideology. Today, New Territories continues to be a pro-Beijing camp stronghold in the district council elections, although Ng Ka-leung believes this is the result of soft tactics and small benefits the resourceful camp has provided to the largely apolitical lower class voters.

Even if the residents were unhappy with the parallel trading situation, not many acted on it, choosing instead to accept and adapt, Ng, the filmmaker, said.

At the same time, Ng said, a combination of factors such as a political enlightenment following the Occupy movement, as well as local issues such as corruption in housing estates also worked to sway residents’ voting preferences against pro-Beijing candidates both in the district and generally in Hong Kong.

In the most recent legislature direct elections of September last year, the opposition camp won six out of nine seats in New Territories East – the same proportion as the last elections, but with one localist, 30-year-old Sixtus Leung, being elected for the first time. Leung was subsequently disqualified for failing to take the oath properly during the swearing in ceremony, using a term deemed insulting to China. Pro-democracy politician Lam Cheuk-ting now holds a seat in the legislature as well.

Despite the overwhelming anti-mainlander sentiments that rose out of cross-border trading, Leung stresses that his organisation targets all parallel traders, regardless of nationality.

Both Ng and Leung also note that many who take part in parallel trading are, in fact, Hong Kong people, not just mainlanders – even if, for many locals, the issue has become a symbol of the struggle against China.

But Ng says that the focus should be on the overall role played by the Hong Kong government in curbing cross-border trading, which includes whether the police enforce the law following complaints by locals and whether action is taken to prevent it from happening.

Similarly, Leung said, “The problem has been around for over a decade, but no one did anything about it. It was only after members of the public surrounded the Sheung Shui station that the government reacted.

“But before that, where were the district councillors or the lawmakers? Didn’t they hear the complaints of the local residents?”

Leung said that the government held the same attitude towards other issues such as birth tourism, refusing to act until the problem reached a boiling point. This frustration towards these unsolved issues was what inadvertently accelerated the rise of localism. “We’ll save Hong Kong ourselves,” Leung says, quoting a popular protest slogan.

The government finally withdrew the multiple visa scheme in April 2015, and most of the heated clashes have since died down. The North District Parallel Imports Support Group holds fewer protests, but now come up with different ways to raise awareness about the issue. Today, parallel traders are still commonplace in the border town, and the Shek Wu Hui most local residents remember while growing up is gone forever. But the seeds of localism have been sown and there is likely no turning back for Hong Kong. 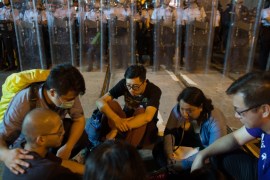 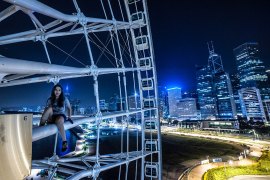 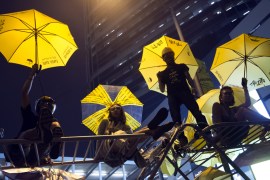