Zeid Ra’ad Al Hussein, the UN human rights chief, has told Qatari officials that there are vigorous attempts under way to address the humanitarian situation resulting from the blockade imposed on Qatar by several Gulf countries.

Shortly following the severing of diplomatic ties and border closure between Qatar and the three Arab Gulf countries of Saudi Arabia, the UAE and Bahrain, Qatari nationals were ordered to leave within 14 days.

Saudi, UAE and Bahraini citizens were also given the same timeframe to leave Qatar.

As a result, hundreds of mixed-citizenship Qatari couples are facing the grim prospect of being split from their families.

Qatari officials have repeatedly stated that the ultimatum issued by Saudi Arabia, UAE and Bahrain for Qatari citizens to leave was a violation of human rights that required UN intervention.

A statement issued by the committee said Marri briefed al-Hussein during a telephone conversation on latest developments regarding the human rights situation.

Before the crisis, citizens of the Gulf Cooperation Council (GCC) enjoyed a great deal of freedom of movement between the six member states, and close tribal ties mean that, over generations, thousands of intermarriages have been celebrated between Qataris and other GCC citizens.

Hit by the rift

Citizens of the Gulf countries had the right to live, work and travel wherever they chose to in the region. The passport they held never mattered – until now.

Wafa Al-Wazeedi is one Qatari whose life has been affected by the rift. Her children were born in Qatar, but her ex-husband is Bahraini.

As is the practice in several Arab Gulf countries, the children can inherit only their father’s nationality.

Now Bahrain says its nationals must return within two weeks or risk losing their citizenship.

“We found ourselves lost. We may be separated from our children and return back to Bahrain for no reason,” al-Wazeedi told Al Jazeera.

“In the Gulf, we have blood relations and a cousin in all these countries around us. We believe that we are one country, with the freedom of movement and marriage,” said Wazeedi.

Her daughter said: “We don’t want to be separated, like lots of families here. A lot of families are integrated between different countries in the Gulf region. Why should we be separated because of politics?”

Along with the severing of diplomatic ties, the Saudi-led blockade against Qatar meant shutting the only land border that Qatar shares with Saudi Arabia.

Like al-Wazeedi, there are 6,474 families in which one spouse is Qatari and who now face the prospect of being broken up.

According to official figures, there are 8,254 Saudi residents, 784 Emirati residents, and 2,349 Bahraini residents living in Qatar.

Owing to the GCC-Qatar rift, these 11,387 people will have their right to freedom of movement, residency, and property ownership violated.

READ MORE: Analysis – Qatar-Gulf crisis: Who are the ‘terrorists’?

Nouf*, a Qatari whose late husband was Saudi, had been ordered by Saudi authorities to leave the kingdom immediately.

Nouf was told that she would not be able to take her children as they are citizens of Saudi Arabia, not Qatar.

Nouf is being forced to leave her children behind, including her disabled son who needs round-the-clock care.

About 1,954 nationals from Saudi, the UAE and Bahrain are also employed in Qatar’s public and private sector and own companies and trading interests, and will have to leave their jobs.

Mohammed*, a Saudi man married to a Qatari woman, has been living and working in Qatar for many years.

He was informed that he would have to go, along with their children, back to Saudi Arabia, leaving his wife behind.

Mohammed says he has been told that if he fails to comply, he will face “serious consequences”.

According to Qatar’s NHRC, which has been receiving complaints about the impact of the Saudi-led blockade, such procedures constitute a grave violation of the rights of these citizens to movement, work, and property ownership.

“These steps result in tearing up families, disrupting businesses and interrupting students’ education across the region,” the NHRC said on Thursday in a news conference in Doha.

The NHRC said it was alarmed over the “violation of human rights”.

Later on Friday, Amnesty International criticised Saudi Arabia, the UAE and Bahrain, accusing the Gulf states of toying with the lives of thousands of people in their dispute with Qatar.

“For potentially thousands of people across the Gulf, the effect of the steps imposed in the wake of this political dispute is suffering, heartbreak and fear,” James Lynch, the deputy director of Amnesty International’s Global Issues Programme said.

*Names for illustrative purposes only 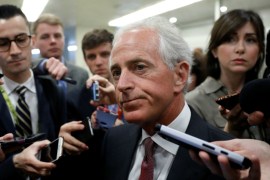 US senators push for strategy amid Qatar-Gulf crisis

American legislators express concern over intensifying dispute in the Middle East after embargo slapped on Qatar.