Jill Farrant first learned about resurrection plants when she was nine years old. A dead plant she had seen on her family’s farm in Limpopo, South Africa, had come back to life after it had rained. “The ded [sic] plant on the rocks was alive, but Dad said it was too soon after the rain,” she wrote in her diary.

Now, more than four decades later, Farrant is the world’s leading expert on plants which can “resurrect” from a desiccated state after they are rehydrated. Some species of resurrection plants can live without water for years and rehydrate within hours after rain.

With droughts likely to become more common in Africa due to global warming, Farrant hopes her work can mitigate the effect of disrupted weather patterns on food security.

She wants to find out how resurrection plants can lose large amounts of water without dying – and then make crops do the same thing by switching on the genes responsible for inducing desiccation tolerance as well as those important for recovery from extreme water loss.

Al Jazeera spoke to Farrant about her research.

Al Jazeera: Where can your work on resurrection plants make the biggest difference?

Jill Farrant: In terms of what I want to do, Africa, Africa, Africa. We are a continent that’s reliant on rain for our crops: we are already a poor continent so we cannot put in a lot of irrigation. It is also the continent where there is the greatest predicted food shortage compared to the population growth. The United Nations has projected the African population to double to 2.4 billion by 2050, while global warming is likely to worsen droughts and reduce crop yields. But apart from all of that, it is my passion to do this for Africa.

Al Jazeera: Will resurrection crops put an end to famines caused by droughts?

Farrant: No, definitely not. It can be a solution for only a small amount of crops that are going to help with food security. People are thinking about aeroponics, hydroponics, eating insects, eating all sorts of other foods. Resurrection crops is one solution of many – but I think it is a very important one.

Al Jazeera: What would you tell people who oppose your research because they take issue with genetically modifying plants?

Farrant: Without trying to be rude, they are very ignorant about the subject. Genetic modification of plants is probably the safest kind of GM, yet it is the most vilified one. The crops that we are eating [today] are highly genetically modified. Through conventional breeding, thousands of gene changes happened without us knowing that we were doing GM all along.

The second thing I would say is that the way I am planning to do this is not by putting in any new genes, but by activating genes that are already in the plant. Finally, anything we eat gets a high level of scrutiny. There are a lot of things that are going to have to happen before we allow [these crops] in the fields.

Al Jazeera: How is the Trump presidency affecting your work?

Farrant: It has the potential to have a huge impact because a lot of people in the world listen to what America is doing. I collaborate with scientists in the US who are terrified about what is going to happen to their funding in key areas of research, particularly agricultural research. I would like to think that Trump is an exception, but he has a very strong say and strongly dominates public opinion. If more people buy into what he is saying and what he is saying is without proof, we’re in trouble.

Al Jazeera: Is the momentum for research into countering the effects of climate change increasing?

Farrant: The momentum has been increasing hugely. I’ve seen an enormous passion to tackle key agricultural issues that we are facing around the world. But one of the things I’ve noticed is that plant scientists are not given as much credibility as medical scientists or anyone who might tell us more about ourselves or animals. So I think that us in the field feel very urgent about it, but I’m still in doubt about whether our funders feel urgent about it as well.

Al Jazeera: What goal are you working towards now?

Farrant: Right now, my biggest goal is to get money to do the research that I think still needs to be done to get proof of concept, switching on certain genetic pathways in crops that we believe might improve their tolerance of water loss.

Most plants don’t tolerate much water loss. They have very good ways of avoiding or resisting it, but I want to push them beyond that 50 percent barrier where they would all die, and then be able to bring them back to life with rehydration. If I had all the pairs of hands and all the money I needed, my collaborator and I have estimated that within five to 10 years we could get to the proof of concept stage. 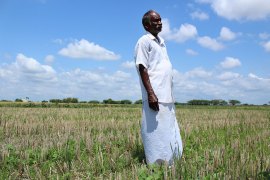