At least 37 people have now been confirmed dead following an armed and arson attack, just minutes after midnight on Friday, on a resort and casino complex in the Philippine capital, Manila.

Government officials blamed the incident on an “emotionally disturbed individual”, who tried to carry out a robbery, by shooting at TV screens and setting on fire properties inside Resorts World Manila casino, suffocating many of the victims.

Initial reports said that a fighter of the Islamic State of Iraq and the Levant (ISIL, known as ISIS) was responsible for the attack, a claim that was later dismissed by authorities as “plain and simple propaganda”.

Here is what we know:

Police said the suspect was a heavily indebted Filipino who was hooked on gambling.

Albayalde said the man’s family said he was US$80,000 in debt “due to being hooked in casino gambling”.

Albayalde said the family’s account corroborated the belief that “this is not an act of terrorism”.

The masked man stormed into the Resorts World casino and hotel complex in Manila on Friday with an M4 automatic rifle and a bottle of petrol, before setting alight a number of different rooms in the complex.

Thirty-six people died in the fires, dozens more were injured in a stampede to escape, and the gunman was found dead about five hours later in a hotel room after committing suicide, police said.

He also said that the remains of the suspect were badly burned, making him unrecognisable.

Another statement from Albayalde said the suspect shot himself in the head, before setting himself on fire inside one of the rooms of the hotel adjacent to the gambling area.

A separate statement from the hotel management said security personnel from the resort shot and wounded the attacker.

“Severe blood loss from the gunshot wound significantly slowed the assailant down, and resulted to his holing up in a room where he took his own life,” the statement said.

According to reports citing authorities, at least 37 bodies were found at the casino complex, including that of the suspect. At least 78 others were injured.

Police said the victims suffocated from thick smoke after the suspect burned tables inside the gambling area of the complex.

An initial report of fatalities released by the resort management only listed 35 fatalities, excluding the suspect.

A South Korean foreign ministry official said one of its nationals died during the attack.

Gil Yongco, 54, was quoted as saying that his daughter was trapped at the complex during the attack, and called him for help.

An employee of the hotel named Hazel Yongco was later identified as one of the fatalities.

According to the Philippine Daily Inquirer, she left behind her husband, Michael, and their young daughter, Micah.

In her Facebook page, one commenter said, “Thanks for the friendship. We love you.”

Young moms, fathers, beloved bosses among those who died in the Resorts World Manila attack https://t.co/BQKRTLItbB

Elizabeth Gonzales, wife of a member of the Philippine Congress, was also listed as one of those who died.

Authorities have not established a link between the incident in Manila and the continued fighting in the southern Philippine island of Mindanao.

Before the incident early on Friday, police in the Philippines were already on high alert following the siege in the city of Marawi, which was blamed on armed groups that have pledged allegiance to ISIL.

According to the latest reports, at least 178 people have been killed in the almost two-week fighting.

Foreign fighters, including nationals from Malaysia and Indonesia, were among the fatalities in the clashes, according to reports.

Due to the fighting in Marawi, Rodrigo Duterte, Philippine president, has declared a martial law across the entire island of Mindanao.

He hinted that he could expand the order to the entire country if violence spreads. 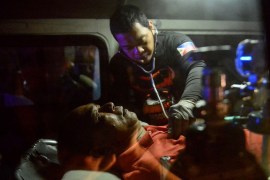 Police say victims died from suffocation and smoke inhalation after attacker raided resort and then killed himself. 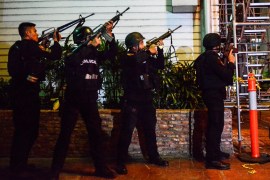