Ramallah, occupied West Bank – Loay Tailakh calls his family in the besieged Gaza Strip every day, but he avoids video chats, which can leave him depressed and immobile for days.

“I feel like a failure as a father,” he told Al Jazeera, taking a deep drag of a cigarette.

Although his wife and three children live just a two-hour drive from his home in Ramallah, he has not seen them for two years.

“I knew I would face some difficulties bringing my family to the West Bank, but I never thought I would be in a situation where I might never see them again,” Tailakh said.

More than a decade ago, Tailakh, who received a PhD in Agriculture from Bulgaria, moved to Gaza from the West Bank to work for the agriculture ministry. He married his wife, Shireen, in 2004, and they had three children: 13-year-old Karim, nine-year-old Yusuf and seven-year-old Salem.

But when Hamas took over the Gaza Strip in 2007 and the Israeli government implemented a devastating blockade, severely restricting Palestinians’ movement in and out of the small territory, Tailakh’s life began to unravel.

In an act of protest against the Hamas victory, the Fatah-ruled Palestinian Authority (PA) ordered their public employees to refuse to work with the new government. Some 70,000 employees were subsequently paid to stay at home.

Tailakh was among some 50,000 PA employees who decided to continue working in the public sector under the new government – but as a result of the continued feud between Hamas and the PA, they received only partial payment for their work and sometimes no payment at all, plunging many families into financial chaos.

I knew I would face some difficulties bringing my family to the West Bank, but I never thought I would be in a situation where I might never see them again.

Mahmoud Abu Rahma from the al-Mezan Centre for Human Rights said that the Fatah-Hamas rivalry has served to further divide Palestinians.

“Employees paid by the Gaza authorities have mostly fallen under the poverty line due to the sporadic salaries paid to them,” Abu Rahma told Al Jazeera, noting that the situation has made members of both groups vulnerable to retaliatory acts.

Palestinians such as Tailakh have unwittingly become trapped between the Israeli-imposed siege and the ongoing Palestinian divide.

In 2014, Israeli authorities led a 51-day military offensive on the besieged enclave, killing more than 2,000 Palestinians.

“Those were the worst days of my life,” Tailakh said, his jaw clenching as he attempted to hold back tears. The family was forced to flee their home during Israeli air strikes.

“We fled to my sister’s house when the war began,” Loay said.

“We would listen to the radio during the bombings. It was so painful each time we heard the name of a friend or family member who had been injured or killed, or whose house was just destroyed.”

The family eventually found refuge in the only place they believed would be safe from the Israeli onslaught: a children’s hospital.

When the war ended, Tailakh said, their neighbourhood smelled of gunpowder, and fires raged everywhere.

“I just stood there and started crying like a child,” he said. “Even after the bombings stopped, the stress and fear never did. Years without receiving a steady salary, coupled with war, made it so we just couldn’t survive any more. So my family and I decided that we had to try and leave Gaza.”

A year later, he got his opportunity. His elderly mother in Hebron was in need of a caretaker, and Tailakh, who has a West Bank residency, received permission to exit Gaza for this reason. At the same time, he was offered a job with the PA’s agriculture ministry in Jenin as the director of experimental agriculture.

His wife’s permit request, however, was rejected by the Shin Bet, Israel’s internal security agency, for “security reasons”.

Spokespersons for Israel’s interior ministry and the Shin Bet did not respond to Al Jazeera’s requests for comment on the case.

But months have passed with no response, and Tailakh remains alone in his home, unable to sleep. “Each day, my children ask me when they will be able to come see me,” he said. “I don’t know what to tell them any more.”

The perpetual stress has had negative effects on Tailakh’s health, he said, noting that over the past two years he has gained weight and developed diabetes and high blood pressure. Teachers in Gaza have also noted that his children have begun to struggle in school, and their grades have dropped since their father left.

“This situation, in which families cannot reunite and are forced to live apart as a result of restrictions on movement imposed by Israel, is sadly a common one,” Shai Grunberg, a spokesperson for the Israeli human rights group Gisha, told Al Jazeera.

The group reported that more than half a million Gaza residents have relatives in Israel and the occupied West Bank, including East Jerusalem; the majority are not permitted by Israeli authorities to see each other.

According to the Israeli army’s procedures in Gaza, movement from the besieged territory into the occupied West Bank is limited to the “most exceptional humanitarian cases”, and resettlement based on family relationships is not permitted.

Even a Gaza resident who meets Israel’s humanitarian criteria, such as having a chronic medical condition and needing a West Bank relative to care for them, must first prove that they have no first- or second-degree family members in Gaza who can support them before being considered for a temporary permit.

Those lucky enough to obtain a permit must consistently apply for its renewal and can have it revoked at any time. It takes seven years for a Gaza resident to be considered for permanent resettlement in the occupied West Bank.

READ MORE: In Israel, racism is the law

Tailakh hopes that his wife and children will be able to exit Gaza through the Egypt-controlled Rafah crossing, allowing them to meet in Egypt for a few weeks during his forthcoming vacation from work. But for more than a year, his family has anxiously waited behind 25,000 other Gaza residents, desperately anticipating the crossing’s infrequent openings.

“I am worried about the long-term psychological effects this will have on my children if we are not reunited soon,” Tailakh said, his voice trembling.

“Each night, I stay awake praying that tomorrow will be the day that I can hold them again, and our suffering will finally end.” 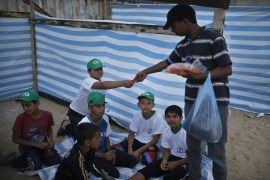 Children are often denied access to their families amid controversial citizenship laws. 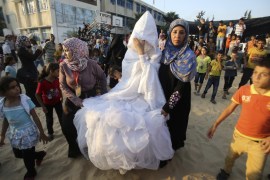