Syracuse, Italy – We’ve been in Sicily for a week now.

My team and I first came to cover the G7 talks, in which US President Donald Trump successfully fended off an Italian proposal for all countries at the table to treat the refugee crisis in the Mediterranean as a humanitarian emergency.

But we then stayed on to take a look at the crisis now.

As it turns out, things are going from bad to worse. The Libyan coastguard, such as it is, is involving itself in rescues by boarding dinghies full of refugees and firing into the air and then robbing them, at least according to the victims and NGOs.

To add insult to injury, the rescuers themselves are now increasingly being blamed for making the crisis worse by being too good at saving people.

Some bloggers in Italy started unfounded rumours that impeccable organisations like Doctors Without Borders (MSF) were being paid by the smugglers.

Italian society, tuned in to institutional corruption, has decided this sounds likely and also assumes the government is in on it as a way of importing cheap labour and undercutting the jobs market.

In the midst of this tidal wave of utter cynicism, my team and I went to visit a reception centre for young girls who are benefitting from a new Italian law that gives child care specialists more authority to look after them when they arrive.

The law may have other effects as well. As it turns out, the teenagers you often see on footage being rescued or getting off the ships in Sicily are very possibly victims of forced prostitution.

We conducted a series of interviews at the reception centre with teenagers who explained how female traffickers persuaded them to leave their homes in countries like Nigeria by promising them jobs.

Once out of the country, they were threatened and forced into prostitution to pay off their debt, the figure invented by the traffickers.

The experts at the centre said almost every girl getting off the boat from Nigeria will have been trafficked.

It isn’t hard to imagine the fear a 15 or 16-year-old faces when the reality of this dawns on them. One tried to get out of Mali, but spoke no French and was dragged back to her locked room.

The experts at the centre said almost every girl getting off the boat from Nigeria will have been trafficked.

It appears the trafficking gangs have worked out that the thousands of people making the journey across the sea are ideal cover for running a child prostitution racket.

So girls who are forced to lawless Libya are either gang-raped there or spared and put in a dinghy with a phone number on a piece of paper and told to call it on arrival. This way, they go into the hands of the gang members in Europe and disappear in Italy or further north.

So, to be clear: Gangs are running child prostitution under cover of the refugee crisis.

It seems to me several things follow from this. Firstly, those who say people from Nigeria should be sent back might want to consider the damage already done to children who are legally entitled to protection under international law.

Secondly, Italy has made a brave move ring-fencing children’s rights by guaranteeing the same care to refugee kids as Italian ones. Other EU countries could do the same if they want to close down trafficking gangs, because once girls are in the care of reception centres the criminals can no longer reach them. And the girls hand over details of the traffickers to their carers.

Think also about the US government, concerned at the G7 talks purely about migration as it affects security, rather than human rights.

But mostly, think about the European Union working with Libya to keep refugees out. And imagine a young girl, terrified and abused, hoping Europe will look after her.

The EU keeps saying it believes in the rule of law. Now is the time to show it. 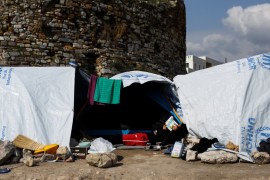