Aulnay-sous-Bois, France – “He still excretes from a hole in his stomach into a bag,” says Eleanor, as she sits in her living room in a tower block a few kilometres from where Theo, the youngest of eight siblings, was beaten by police and raped on Monday, February 2, in daylight.

Police say the “incident”- they do not describe it as rape – was an accident, that Theo’s trousers “slipped down on their own”.

“Theo is not like he was before,” Eleanor continues. “Even now, he sleeps very late and wakes up really early. He doesn’t really sleep, in fact. I’m his big sister. When I look at him, I can see he’s a bit sad. He still jokes around but sometimes there is an absence. His face turns dark.”

On the fateful day, officers stopped Theo – a 22-year-old youth worker and talented football player with no criminal record – as part of a “controle”, or stop-and-frisk operation.

Stop-and-searches are frequent in the “banlieues”. They are sometimes carried out more than once a day, often with aggression, and usually target non-white citizens and immigrants, according to several residents Al Jazeera spoke to in Aulnay-sous-Bois and other impoverished suburbs.

“Some policemen consider us like rats, we don’t have rights. Their attitude is ‘I can beat you and speak to you however I wish. I am the boss, you are the shit.’ Animals have more respect,” says Eleanor, as she reflects on a stop-and-search 10 days earlier, where tear gas canisters were unleashed on a group of black and Arab boys in the estate.

Official data to determine whether or not racial profiling is systemic does not exist because it is against the law in France, where the concept of “colour-blindness” reigns, to collect information about ethnicity.

‘I couldn’t understand how it had come to this’

Theo says officers shouted racist insults at him, calling him “negro” and “bitch”, inserted a baton into his anus violently and beat him, focusing on his private parts until he was no longer able to sit up. They sprayed an entire can of tear gas on him, he says.

Grainy video footage filmed by bystanders of the end of the episode shows officers propping up Theo, who is handcuffed, limping and wearing only one trainer having lost the other in the attack, and escorting him to a police car.

While in the back seat, Theo says, officers spat in his face, filmed the abuse on mobile phones, and posted it to SnapChat.

Covered in blood, he was hospitalised and needed major emergency surgery.

A doctor declared him unfit for work for at least 60 days.

Police interrogated Theo for several hours from his hospital bed without the presence of a lawyer, and prevented family from visiting while he was still officially under arrest.

The practice of stop and search is essentially targeted on these Arab and black youths by the officers working in poor neighbourhoods of the banlieues.

“When I got to the hospital, my brothers called me and said, ‘Listen, the charge is rape.’ I couldn’t believe it. They said they put a baton inside him. The connection between stop-and-search and baton rape, I couldn’t understand how it had come to this. I walked up and down the ward for three minutes alone, crying. My father was hiding in a corner. Another brother said, ‘Please stop crying, I can’t stand it.’

“When I saw Theo, I started crying again and apologised, but he was strong. I said, ‘You have the right to cry, don’t try and be strong for us.’ When another brother came in, he cried. Then Theo shed some tears. He’s our youngest brother. There we were, all in one room, comforting each other. About 15 of us, brothers, sisters and cousins.”

The four officers involved, three of whom are charged with assault, have been suspended. All deny the allegations against them.

A magistrate has charged one of the officers with rape and is still investigating the case.

“The conditions of [Theo’s] arrest reflect a common experience for young men of working-class background belonging to ethno-racial minorities,” says Didier Fassin, a professor of social science at the Institute for Advanced Study in Princeton and the author of Enforcing Order: Ethnography of Urban Policing.

“The practice of stop and search, often illegal and acknowledged as such by officers’ superiors, is essentially targeted on these Arab and black youths by the officers working in poor neighbourhoods of the banlieues.”

“Affaire Theo”, as it is known in France, set off days of protests, some peaceful, others violent as anger swelled, despite Theo calling for calm from his hospital bed, flanked by Francois Hollande, the then president.

“Theo reacted with dignity and responsibility,” Hollande tweeted at the time, adding “Justice will be served.”

“The hypocritical wave of government indignation was not followed by any exemplary procedure against the police officers who participated in the rape,” says Fania Noel, a black feminist and anti-racism activist. “Once again, we have seen that the police have the most complete impunity when it comes to violence against people of colour in France, even more when they come from low-income communities.”

There is also the issue of which officers in particular are serving these communities.

Created in 1994 to monitor “sensitive” neighbourhoods, the brigades anti-criminalite (BAC), or anti-crime squads, comprise volunteers from other national police units.

“The BAC is the most hated police unit in the banlieues,” author Cathy Lisa Schneider writes in Police Power and Race Riots. “Because French police is centralised, new recruits are usually stationed in unfamiliar territory. Four out of five officers come from rural areas and small towns. The newest and least experienced among them are often stationed in the banlieues.”

OPINION: Justice for Theo – Who can protect us from the police?

“And they are the most often involved in cases of violence. This violence is not only physical, but also moral, via forms of humiliation and debasement in front of friends and relatives. It is often accompanied by racist and sexist comments, which should perhaps not be a surprise since a recent poll showed that more than half of the police voted for the far-right party,” he explains.

“The aim of this law and order policy is not to protect the public order since, as one high official told me, these special units often create more problems than they solve when they intervene, but to impose a social order, in which these youth learn their place in society.”

‘Our community is angry’

Theo’s family members have not revealed their surname to the media, out of fear of reprisal attacks from the far right for speaking out against the police. Even so, they have received hate mail. “We’re not here to support you,” one man wrote. “Go back to Africa.”

They have also received letters of support, and have the unanimous backing of the neighbourhood.

Brutality and violence have become habitual for the inhabitants of the suburbs and a way for the police to affirm their authority and power.

“Our community is angry, but we have told everyone to wait for the legal response and not to be impassioned,” Eleanor says. “Everybody came to hospital, even people we didn’t know from Aulnay-sous-Bois and neighbouring areas. One friend said, ‘Again it’s another fight, we are small, they [the police] are tall.’ We don’t want the police to brush this under the carpet. Our people listened to us, we have chosen to wait for justice.”

Despite initial protests, public anger has not swelled to the extent of the unrest in 2005.

Then, the deaths of black and Arab teenagers from the Clichy-sous-Bois suburb, Bouna Traore and Zyed Benna, sparked three weeks of riots. They were killed by electrocution after running away from police and hiding in a power station, fearing lengthy interrogation from a stop-and-search.

“Theo’s case reminds us of the tense relations between police and the mostly poor, non-white population, often the descendants of colonised people, who live in the margins of the capital,” says Kiymis, a French author and “Afrofeminist” blogger. “Brutality and violence have become habitual for the inhabitants of [the suburbs] and a way for the police to affirm their authority and power.”

Though Emmanuel Macron, the new president, denounced France’s colonial past as “a crime against humanity” during the election campaign, he was less vocal about structural racism and police brutality.

“Macron’s government will have to work on the mutual mistrust between the police and suburban youth,” says Thomas Roulet, a sociologist and professor at King’s College London. “Balanced politics and better integration of those urban areas will tackle the problem at its roots and help relax the tensions.”

Macron is going to find Theo's case on his doorstep. We want to see concrete action.

Others have suggested initiatives to make the police accountable.

In 2012, Stop le Controle au Facies (Stop appearance-based stop and searches) – a collective of activists – proposed a receipt system to the government: police would have to give a document to those they stopped, providing their reasons for the search and the time of the interrogation.

The proposal was never enacted into law, despite Hollande, then president, expressing support.

“To solve these difficult issues a profound reform of the police would be necessary, so that officers would be better recruited, properly trained, effectively supervised and punished when they violate the law or their ethical code,” says Fassin. “But the two most urgent and practical decisions would be the dissolution of the anticrime squads and the establishment of receipts for stop and search.”

For Eleanor, the solution lies in engagement.

“Macron is going to find Theo’s case on his doorstep. We want to see concrete action. We want to make proposals and be listened to, we don’t want their solutions for our community. We know our situation, and our place. We have to build together – you have to know what it’s like for us here before giving us answers.” 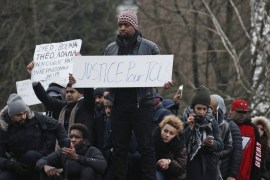 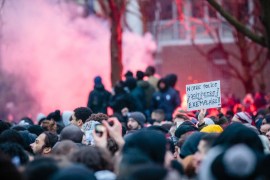 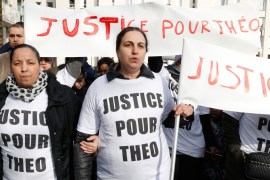