Brighton, UK – On a grey Saturday in March, about 40 protesters walked out of their jobs at the Duke Cinema in the British seaside resort of Brighton. It felt more like a celebration than an industrial action as the banner-carrying protesters crowded the pavement in front of the cinema.

Workers from London branches of Picturehouse, the chain of which the Duke is a part, travelled to Brighton to join the action, chanting slogans and ferrying coffee to their colleagues on the picket line.

The walkout was a milestone for employees of Britain’s major arthouse cinema chain, but this was just the beginning; a tough fight lay ahead.

For the past three years, Picturehouse workers have been building a campaign to demand that staff be paid the living wage.

At £9.75 ($12.63) an hour in London, £8.45 ($10.95) in the rest of the UK, it is an hourly rate that is above the government-fixed minimum wage and calculated to be the minimum amount employees need to live comfortably. It is not a legal requirement, but more than 3,000 employers in the UK have pledged to pay it to their workers.

The Picturehouse chain, which is owned by multinational corporation Cineworld, isn’t one of them.

Nia Hughes, who works for the Ritzy Cinema, in Brixton, south London, is one of the employees who thinks this is unacceptable.

“I don’t think any workers should be living under the poverty line,” she told Al Jazeera at the Brixton strike, adding that the fact that the chain has expanded and increased its revenue, makes its refusal especially unsettling.

The staff at Picturehouse say the tight budgets imposed by their current wages of £9.05 ($11.72) an hour affect every aspect of their lives.

“You can just about get by on what you’re given and that can mean working long hours,” says John Karley, a London Picturehouse employee. “It feels precarious, and it’s very stressful.”

High rents and living costs, particularly in London, mean that low wages can have serious implications. The living wage calculation, which is assessed by the Resolution Foundation think-tank, takes into account basic expenditure on food and essentials as well as rent, bills, travel and childcare.

And a growing number of people are having to get by on low wages.

“We’ve got record levels of people in employment, but the sorts of work people have been moving into are not well-paid jobs,” explains Mubin Haq, director of policy at Trust for London, a non-profit group that focuses on reducing poverty and inequality in the capital. “And as well as wages being squeezed you also see costs increasing. So people get this double whammy.”

For many workers at Picturehouse cinemas across London, the city’s high rents are the toughest squeeze. Statistics from the Mayor of London show that almost all areas in inner London have room rents of more than £130 ($168) a week.

In Brixton, where the Ritzy cinema workers went on strike, the average rent for one room in a shared property is estimated at £686 ($888) a month. On a living wage salary this means that around half an employee’s take-home pay would be spent on rent.

This doesn’t only affect cinema workers. In February, cleaners employed by universities and hospitals in London went on strike over conditions and wages.

“One of the frustrations for us is people not getting reasonable hours,” says Karley, explaining that it’s common for workers to be employed on zero-hours contracts. This means they aren’t guaranteed a set number of hours, and could find themselves working fewer, or even no hours.

Since 2008 the number of people in London on part-time or temporary contracts has risen from 25 percent to 29 percent.

Those on strike have also raised the issue of the widening gap between an average worker and top company executives. According to the independent media union BECTU, Cineworld chief executive Mooky Griedinger was paid £1.2 million ($1.5 million) in 2015, the equivalent of £575 ($744) an hour.

Wage disparity has been widening steadily since the 1970s, explains Haq. “We’ve been told for years that this is about performance-related pay and attracting talent,” he says, adding that this argument has been countered by research into low-performing companies with high-earning chief executives.

“But if London really wants to be an attractive place to work it need to keep the wages up, to the living wage at least.”

According to a recent study about 13.5 million people in the UK – or 21 percent of the population – are classified as poor, a category defined as living on 60 percent of the nation’s median household income after housing costs are deducted. Yet of this number, 55 percent have at least one member of the household in work.

In Brighton, staff feel that the strike is part of a bigger protest movement that is addressing these problems.”[The campaign is] very much part of the bigger picture,” says one employee who did not want to be named.

The Ritzy branch of Picturehouse, which in 2013 became the first cinema chain to strike, offers a blueprint for the campaign that lies ahead.

Hughes has been part of strike action at the Ritzy since the beginning when staff there unionised with BECTU and began a campaign that saw them walk out of work 13 times in the course of a few months.

Eventually the Ritzy staff secured a 26 percent pay rise that brought their salaries to £9.10 ($11.8) – close, but not quite equal to the living wage.

That is still more, however, than the £6-£8 ($7.7-$10.3) an hour that other staff at Cineworld are paid, according to salary and employer review network, Glassdoor.

“I think that it was pretty groundbreaking for modern striking,” Hughes says of the first year of the campaign. At the time the campaign attracted significant attention, with a “carnivalesque” atmosphere, branding that riffed on movie tropes, and support from high-profile figures in film and TV.

“We didn’t want to just have a picket line with people handing out forms,” Hughes says. “We wanted to modernise striking, I guess. We understood that what we were striking for appealed to all workers, and especially those at the lower paid end of the scale.”

Now, the momentum of that campaign is spreading. In the past six months, the Picturehouse branch in Hackney, north London, began strike action for the living wage, followed by branches in Crouch End, in central London, and Dulwich. The Brighton walk-out marked the strike’s jump from a London-based protest to a nationwide campaign.

For the Picturehouse brand, the attention drummed up by the strike could already be a concern, especially as strikers are now calling for a boycott of the chain until demands are met.

At its Hackney branch, large orange posters advertising the pay rates of workers are the first things customers now see when they walk in.

Christie Grant from Hill & Knowlton Strategies, the PR agency that represents Cineworld, told Al Jazeera: “This is an issue for Picturehouse and its management team and we hope that the dispute will be resolved as quickly as possible.”

A representative of Picturehouse declined a request for an interview, but referred Al Jazeera to a statement on the company website stating that the company’s pay rates are among the highest in the industry and above the minimum wage, and that increases in pay outstripped inflation rates.

“We have operated a policy of raising the pay rates of front of house cinema teams and cleaning staff at a different proportion to the rest of the company, in order to slim the differentials between the top and the bottom wages paid,” the statement says. “Working together for a profitable business enables us to create more jobs, share more in pay and provide a return to shareholders.”

Picturehouse’s statement adds that almost all staff are represented by the Forum, a collective-bargaining unit set up by the cinema itself.

But frustrated at a lack of progress in negotiations with the Forum, the strikers have joined BECTU, and want the cinema chain to recognise it. Despite having recognised BECTU representation at the Ritzy in an earlier agreement, Picturehouse is yet to meet this demand.

“I became very disillusioned with how limited the Forum really was,” says Karley, who has been working with Picturehouse for 10 years. “You feel there’s so many limitations in what you can do … For the company I think it’s very much a way of stopping the staff from having any independent representation.”

Staff at branches around London say their requests for meetings with the Picturehouse management continue to be denied, and that with no possibility for negotiation they have been left with no option but to strike.

Strikes are now taking place on an almost weekly basis, with staff walking out on selected weekends at cinemas across London. When walk-outs happen, staff picket the cinema and speak to potential customers who often decide against a visit after learning of the boycott.

The campaign is resonating beyond Picturehouse staff. At least 41 members of parliament, mostly from opposition parties, have signed an Early Day motion demanding better treatment of staff by Picturehouse’s owner, Cineworld. And the actors Sir Ian McKellen and Susan Sarandon were recently among 25 celebrities signing a letter to pledge their support.

“Cineworld is a very successful company that made a substantial profit of £83.8m in 2015, and it is vitally important to share your success with your workforce,” the letter said.

And despite the challenges of the strike, many staff are optimistic.

“People seem much more aware and likely to take action now,” Karley says. “The living wage is hopefully taking hold as a standard.” 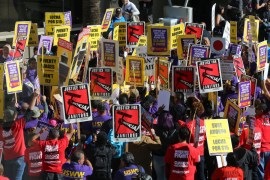 Hundreds arrested after “Fight for $15” rallies take place in cities and at some airports across the United States. 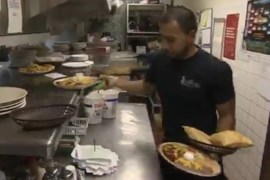 Sante Fe leads the way in US wage laws

Millions of American workers look forward to rise in minimum wage, a decade after New Mexican city put in place its own.