A recent study of political statements by key Iranian officials throughout 2016 and the first half of 2017 provides interesting insights into the country’s political vision and identifies future trends in its foreign policy, especially with regards to bilateral relations with the United States, Russia, Saudi Arabia and Turkey and key issues such as the nuclear deal, Syria, and the Palestinian question.

While both the Supreme Leader and the IRGC leadership showcase Iran as a regional powerhouse, the more reformist Rouhani and the ministry of foreign affairs focus on Iran’s role in combating “terrorism”.

“This is possibly a reflection of the ideologies of the two blocs [the reformists and the conservatives],” said Fatima al-Samadi, the centre’s senior researcher and author of the study.

“The more conservative Khamenei and the IRGC leadership tend to focus more on emotional references to the revolution and the mighty glory of Iran, while the reformist Rouhani and his cabinet are more pragmatic and focused on concrete issues that they can demonstrate Iran’s impact on.”

Since the signing of the nuclear deal in mid-2015, Middle East specialists have been watching closely Iran’s political machinations and intentions in the region. With the ongoing crises and conflicts in the region and Iran’s prominent regional role, many analysts agree that it became increasingly important to understand how the country views its own role in the Middle East going forward, especially in light of the upcoming presidential elections.

READ MORE: The 8 most important questions about Iran’s elections

The nuclear deal and the United States

The nuclear deal and its implications for Iran’s future took up a lot of real estate in official statements, especially in light of its effect on Iran’s bilateral relations.

Most of the analysed political statements communicated a hope for peaceful political settlement of all issues related to the sanctions and full implementation of the nuclear deal.

Opinions on the deal and possible outcomes range from predictions of extended tensions around the file to expressed hope and determination to seek a resolution based on compromise and political solutions.

“Most of the analysed political statements communicated a hope for peaceful political settlement of all issues related to the sanctions and full implementation of the nuclear deal,” explained Samadi.

The demonstrable focus on bilateral relations between the US and Iran also shows that many Iranian politicians were “aware that the cultivation of relations with Washington would have a positive effect on Iran’s reintegration into the international community”.

The US featured largely in analysed statements, ranking highest among all the countries mentioned, ahead of Saudi Arabia, Syria, Turkey, and other countries in the region.

Most statements were critical of the US and condemned its political behaviour, while some statements combined their hostility to the US with threats.

“The tone of these statements escalated in the first quarter of 2017 as the Trump administration took over and expressed its own antagonism towards Iran,” added Samadi.

In terms of regional issues, Iran’s prominent statesmen seemed to be most concerned with the ongoing conflict in Syria which figured largest among their mentions of regional crises.

This was followed by Yemen, the Palestinian issue, concerns about access to Hajj and Umrah for Iranian citizens, and the plight of Shia Muslims in Bahrain.

Most officials addressing Syria spoke of a future political solution, as opposed to a minority who predicted a drawn-out period of conflict and a smaller group of statements that saw the only solution being one of a larger armed confrontation.

That being said, Iran’s vision of a “political solution” remained one that excluded the majority of fighters in the armed resistance against the Assad regime, making it an unrealistic, or perhaps difficult to achieve, solution, according to Samadi.

This is in contrast to attitudes towards the conflict in Yemen and Iraq and the situation in Bahrain, with most statements indicating that Iran’s decision-makers are expecting tension and conflict on both those fronts in the future.

Another important regional file for the Iranian government is the Palestinian question, where a scant majority predicted a continuation of tension, and a sizeable number of statements spoke of “the need for a strong armed confrontation to resolve the matter”.

The main sparring partner in a lot of the issues that concern Iran regionally is Saudi Arabia, of which most official statements were roundly critical throughout 2016. The language was toned down with the start of 2017, with Rouhani speaking of attempts to mend the relationship, but no real signs of a breakthrough can be found.

Turkey is a regional neighbour with whom Iranian decision-makers seem keen on maintaining positive relations, as reflected by the official statements analysed. Most of the language referred to good relations and support to President Recep Tayyip Erdogan after the failed coup of last year.

Russia is another important player in regional politics today. Most of the Iranian official statements maintained a positive view of and spoke of cooperation with Russia.

Of course, the two countries are working most closely on the Syria crisis, and are both in agreement in their support of the regime of Bashar al-Assad, said Samadi.

READ MORE: How will May 19 election shape Iran’s foreign policy?

Iran’s military did figure in a number of statements, with comments reflecting what seems to be a general consensus on the need to upgrade and strengthen the country’s military capabilities.

This came up especially in the context of relations with the US, where it took second place to the nuclear file but was discussed more often than Iran’s efforts to combat “terrorism” in the region.

The question of Iran’s independence from any reliance on other countries or outside forces also came up often, usually tied to the national imperative to keep working to strengthen military capabilities. This language comes mainly from Islamic Revolutionary Guards’ rhetoric that focuses on the might and power of Iran and its military capabilities. 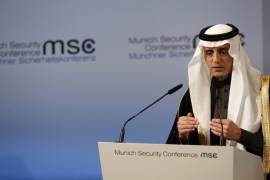 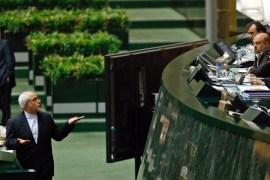