Beirut, Lebanon – Lebanese parliamentary elections are expected to take place in May 2017. The last elections were held eight years ago, in 2009. Although the parliament term in Lebanon is  four years, elections have been postponed twice since 2013 under the pretext of deadlock over electoral law, fear of instability and security unrest.

In November 2014, in an unconstitutional move, the Lebanese parliament renewed its mandate for a second time, granting itself an additional 31 months, ending in June 2017.

The country had already entered a political deadlock in May 2014, when the presidential seat became unoccupied after the end of former President Michel Suleiman’s term. This situation continued for two years and half until the election of President Michel Aoun in October 2016.

This recent election of a president of the republic gave hope that institutional life was gradually coming back to Lebanese politics. However, despite the high hopes, most indicators today suggest that the parliamentary elections will be postponed again, given that the main leaders of the country have not yet been able to agree on an electoral law that satisfies everyone’s wishes.

OPINION: What will a new president mean for Lebanon?

However, regardless of the date the elections will take place or the law that will be adopted; the majority of Lebanese voters will probably choose the same traditional sectarian leaders and their proposed candidates once again.

This will happen at a time when corruption has reached unprecedented levels, leaders have proved – yet again – their unwillingness to solve any of the most basic and pressing problems such as electricity supply, housing, water or unemployment.

The re-election of the same leaders will happen while the majority of the Lebanese are unable to find a job in the country, have no access to good public education or hospitalisation and are struggling to make ends meet.

This is a time when neoliberal policies have become clearly entrenched; privatisation is discussed as the only solution for the electricity crisis, bank loans are being promoted as the answer to the housing crisis and wealth is more and more concentrated in the hands of a few.

In fact, the upcoming elections will be the first parliamentary elections after the rubbish crisis of 2015 when the #You_Stink movement managed to mobilise tens of thousands of angry Lebanese on to the streets, who accused the political elites of drowning the country in rubbish and corruption.

Despite all these conditions, the majority of the people will vote again for these same politicians.

At first sight, this seems to be a puzzle. Why would voters once again choose representatives who have performed so badly? For many liberal commentators, the problem is understood at the individual level. They suggest that Lebanon’s predicament lies in its “bad” leaders and, therefore, a solution to the country’s problems would be to bring new ‘blood’ to the positions of power.

They criticise the “short-sighted” voters who “blindly follow their sectarian leaders and consider that “new” and “independent” alternatives should be available for the “enlightened citizens” who do not identify with this corrupt sectarian system and who want change.

Therefore, it is expected that a number of “independent” candidates will be standing in the upcoming elections, presenting themselves as “qualified”, “honest” and “non-sectarian” alternatives. However, regardless of the qualifications and qualities of these candidates, the majority of the voters will still prefer the traditional leaders.

INTERACTIVE – Lebanon: At the crossroad

The end of the civil war was declared in 1989 with the signing of the Taif Agreement. This came to reinforce Lebanon’s consociational formula of the post-independence National Pact and to adjust the sectarian balance of power.

The Taif Agreement was based on a reading of the civil war as a sectarian confrontation. It presumed that the Lebanese society is “deeply divided” along sectarian lines, and thus needed solutions that addressed these divisions to prevent the resumption of conflict. This led to a re-adoption of consociational prescriptions that allocate seats according to sects.

The essence of consociationalism, as explained by its famous theorist Arend Lijphart, is that negotiation and decision-making should only happen at the level of leaders who are the representatives of their sectarian communities. Lijphart argues that in “deeply-divided” societies, such as Lebanon, contact between groups in society is a bad idea and conflict can only be contained at the elite level.

Therefore the Lebanese system is based on the idea that sectarian leaders represent communities, they defend their interests and they regulate their conflicts.

Although this assumption of communal conflict and sectarian divides has been repeatedly criticised and debunked, adopting such a sectarian power-sharing system reinforced the idea that power does not lie within the state but is rather in the hands of communal leaders whose job is to negotiate it within state institutions.

Within such a political system, networks of sectarian patronage flourished while state institutions weakened to the point that most of their functions were being fulfilled through non-state channels. Sectarian leaders became not only the sole representatives of their communities but also the main providers of services, jobs and security.

The development of such alternative modes of non-state welfare created allegiance to the leaders who, while pursuing their personal interests, also provide for their loyal followers.

These provisions need not be strictly material, but are also increasingly linked to security and protection, as noted by Lebanese sociologist Fawwaz Traboulsi who argues that in the aftermath of the civil war, Lebanon has moved from a system of clientelism to a mafiocracy, where monopoly over violence is not in the hands of the state.

Therefore, the stronger the leader is, the more protection and benefits his constituency expect to have.

Thus, in a time when “corrup”‘, but strong, traditional leaders are providing security, services and material incentives to their constituencies, can independent candidates really compete with them? How would candidates running for elections as independents, without a political party or organisation, be able to compete with well-established sectarian parties and leaders who have a long history of power and clientelistic networks?

Why would voters give up on their powerful sectarian leaders and go for independent individuals who are definitely weaker within the existing Lebanese system?

This, of course, does not say that voters are essentially sectarian and thus prefer sectarian leaders. This is rather to suggest that, in the absence of a state that provides the basic economic and security rights to its citizens, it is illogical for voters to chose candidates who are unable to fulfil these roles.

For this reason, “independent” candidates can only make it if they adopt the logic and the functioning of the Lebanese system as it is, and thus build alliances, direct or indirect, with the traditional leaders.

However, it then becomes illogical to consider that such alliances can be a step towards reforms since the very logic of the Lebanese formula strives on the weakness of the state and the concentration of power outside of it. Therefore, the argument that proposes that the arrival of “good” people to the parliament can be a first step to changing the system from within seems utopic.

If power is not within the state, change cannot come from inside the state. And if independent candidates are unorganised individuals who do not belong to broader political groups, voters are rational to consider that they do not provide serious alternatives.

Therefore, it is not a matter of “evil” leaders and “good” alternatives. The problem in Lebanon is deeply rooted in its very structure. The assumptions on which the system is based have entrenched vertical sectarian division and flourished by masking horizontal class divisions. Leaders in Lebanon can only be leaders by making sure that the state remains weak and welfare and security remain distributed through non-state channels.

Any attempt at organising from below and proposing a serious alternative will quickly be marginalised or crushed. We have recently seen some variations of this with both the popular protests of 2015 and the Beirut Madinati municipal campaign in 2016, when leaders of all sectarian groups united in order to safeguard their beloved Lebanese formula. 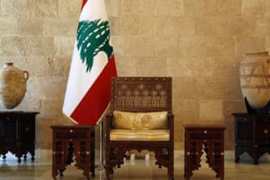 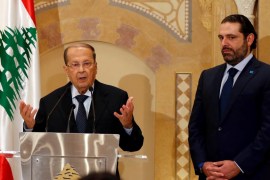 The move reinforces Hezbollah’s supremacy as kingmaker in Lebanon.