Athens, Greece – On the morning of April 4, 2012, a gunshot sounded amid the city’s hustle and bustle.

As passers-by rushed to work through Syntagma Square in central Athens, Dimitris Christoulas had taken his life with a shotgun a few metres from the Greek parliament.

The 77-year-old pensioner, a former pharmacist, had left a note in his pocket.

“The occupation government literally annihilated my ability to survive,” he wrote. “I depended on my decent pension, which I alone and without the support of the state, paid for 35 years.”

His only daughter, Emmy Christoulas, had known nothing about his plans. But, speaking as the fifth anniversary of his death approached, she confidently described her father’s public suicide as a political act.

Her father woke up in the morning, got dressed, and wrote two identical notes – putting one in his pocket and leaving the other on his kitchen table for his daughter to read. He took the subway to the square, site of the country’s most important protests for more than a century.

When Dimitris arrived at Syntagma, he texted his daughter – “It’s the end, Emmy,” he wrote – and switched off his phone.

Greek morning television talk shows broke the news of Christoulas’s suicide a few minutes after it happened. Hundreds soon gathered to pay their respects. Flowers, letters and notes of resistance were left by the tree where he chose to take his life.

Spaniards wrote songs of his resistance. Irish poets wrote odes to him.

His funeral turned into a rally against the austerity measures imposed on Greece, when the country’s debt payments became too onerous to pay amid the worldwide recession. The country’s creditors called for harsh spending cuts and steep tax increases so that Athens could make the payments. Protests and riots became a staple of life in Athens in the years that followed.

Five years on from Christoulas’ suicide, the crisis has only grown deeper.

Greece’s debt is 175 percent of its gross domestic product. Greek officials have cut retirees’ pensions 17 times to around half of their value before the recession, according to the Greek Association of Pensioners. Budget cuts have also been implemented in education, health, and welfare services. Lenders must improve most government decisions. Unemployment stands at more than 23 percent. A fourth bailout agreement is expected soon.

According to the Greek Statistical Service, suicides have increased by 68 percent since 2008, the first year Greek economic growth stagnated.

“I’m of a certain age and don’t have the power of dynamically reacting,” wrote Christoulas in his suicide note. “I can’t find another solution to a dignified end, as soon I’d have to start scavenging through the garbage to find my own food.”

Christoulas’ suicide became a symbol of the devastating effects of austerity on the Greek people. Until then, the majority of the stories published in the international media on the issue were about lazy Greeks who deserved their comeuppance for living off debt for so many years.

“[My father] taught me that you shouldn’t just follow history, you should write it,” said Emmy, adding that she has accepted her father’s decision but still aches from his absence.

Emmy describes her father as a wiry and lean man who had long participated in public life. Her first childhood memories include sitting on his shoulders at pro-democracy rallies against Greece’s military government in the 1970s. The police brutality didn’t deter father and daughter from participating.

His political activity continued throughout his life. He supported an initiative to establish a special committee to audit Greece’s public debt. He also belonged to the “I Won’t Pay” movement which blocked payments by pushing up highway toll bars so people could move freely – the movement claims that highways have already been built with public money, and therefore should be free, especially in times of crisis.

The public debate sparked by the suicide caught many pro-austerity Greek politicians off guard. Some speculated that Christoulas might have lost money gambling or that his children must have saddled him with more debt than he could handle.

“The political establishment got scared from the public suicide, but wasn’t stunned,” Emmy said. “They changed their shirts because of the bloodstains and went on with their election campaign. Of course, I didn’t expect anything different. Like all other suicides, it was a political murder.”

Since Christoulas’ suicide, Greece has had three governments. The current left-wing Syriza government was elected in 2015 with the mandate to end austerity. But Prime Minister Alexis Tsipras has introduced new budget cuts, a betrayal for many of their voters.

“Today, no one talks about the suicides taking place,” said Emmy. “The government is pretending they’re not happening. But when you have thousands of people committing suicide, then there’s a social problem. It’s not just people with personal problems.”

The rise of right-wing nationalist parties and xenophobia in recent years is another sign of Europe’s problems, she said, especially since the arrival of thousands of Syrians and other refugees from Asia and Africa.

“A ghost of the past is reviving: that of fascism,” said Emmy. “It’s the fault of the EU left and the Greek left because they didn’t offer a convincing alternative to austerity. If policies in Greece continue like this there will be social and political apartheid, though many people are already living in one.”

Christoulas ended his note with his hopes for future generations.

“I believe that someday the youth that are now without a future will take the guns and will hang the traitors on the Parliament Square, like the Italian people did in Milan to Mussolini in 1945,” he wrote.

Emmy still feels anger and pain. On a colourful painting in her living room, the words “martyr” and “scream” are collaged, as well as pieces from dozens of the letters people left by the tree where Christoulas died.

“He is a part of history now,” she said. “I feel the need – not the obligation – to continue what he was fighting for.”

But at least she was relieved that her father had not witnessed Syriza’s broken promises or his country’s current situation five years after his death, she added. “It’s different to die leaving hope behind you and it’s different to live in desperation,” she said. 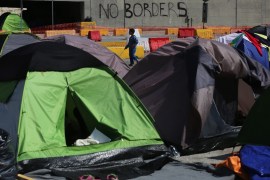 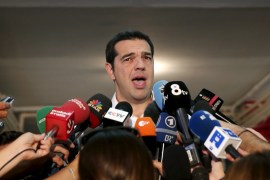