Sinchu Alhagie, The Gambia – “Unbelievable really. Never thought I will see this happen. Guys: chop-chop. Faster, please,” Biram Sait Jobe tells a group of builders who are working on the expansion of the rooms that house Taranga FM.

The radio station went off air early last month after it finally got a permit to carry out maintenance and expansion work on its crumbling building. For close to five years, the station had sought such a permit from the government of the former president of The Gambia, Yahya Jammeh, but with no luck.

“The only thing we expected from Jammeh was to be arrested for just doing our work,” explains Jobe, a senior presenter at the community radio station based in the town of Sinchu Alhagie. “You expected to be jailed anytime and anywhere. Forget getting a permit to expand a radio station.”

In fact, after the station was founded in 2008, Jammeh’s government shut it down five times. The last time soldiers raided Taranga was in January.

Jammeh came to power through a military coup in 1994 and slowly silenced the country’s once vibrant media. One by one, stations went off air and some of The Gambia’s best and most vocal journalists either went into exile or left the industry.

Radio Taranga’s owner and founder was one of those forced into exile. But the station defied the odds and continued to broadcast.

“Since I started working at this station in 2008, nine of my colleagues left. Some went abroad to get away from Jammeh and others left journalism. Until last month, my wife and parents also wanted me to leave journalism,” explains 34-year-old Jobe.

Those media houses that remained on air stopped broadcasting news bulletins and focused instead on sports and non-political music for fear of being raided by the security forces.

In a country where many cannot afford televisions and the newspapers are mostly in English, a language that isn’t widely spoken, and do not reach the rural areas where most of the population resides, it was radio stations that suffered the most.

READ MORE: Being a journalist in Gambia

‘They burnt down my house’

Taranga was different. It broadcast news bulletins in three local languages: Wolof, which is spoken by the majority of Gambians, Manika and Fula. It also translated the English-language newspapers for its listeners. The station quickly became popular – and it attracted the ire of those in power.

“When we started doing this, they came to our place and shut us down,” says Jobe. “They took us off air for six straight months. That was in 2010.”

But when it returned to the airwaves later that year, Radio Taranga continued where it had left off.

The government responded, taking it off air for a year and a half.

Its insistence on broadcasting news and current affairs brought the station trouble. Only state TV and radio were allowed to broadcast news and even they were not out of the reach of the president’s long arm.

“All the staff and journalists you see here were victims of Jammeh, one way or another,” explains Ebrima Sillah, the director general of The Gambia Radio & Television Service, in his spacious office a few doors away from the state TV’s main studios.

One of the country’s most experienced journalists, Sillah experienced first hand the dangers of pursuing the profession in Jammeh’s Gambia.

“They burnt down my house and I was lucky to escape with my life,” he says slowly.

“They sent me warning letters to stop me from working. I used to get constant phone calls threatening me,” adds Sillah, who returned from exile in Senegal a month ago after the country’s new government asked him to transform the state broadcaster.

“During Jammeh’s time, the state media was nothing but his mouthpiece. We are now trying to change that. We want to inform the public so that they can make informed choices on important matters in our country.”

WATCH: Clamp down on freedom of expression in Gambia (3:04)

‘This is a new Gambia’

For the first time in more than 20 years, the tiny West African country’s media is abuzz. Journalists are returning from exile and the new government has been vocal in assuring them of their support.

“The days where the government told the media how to report are long gone. This is a new Gambia and freedom of the press is going to be protected,” says Malik Jones, the deputy permanent secretary at the information ministry.

“We have repealed the repressive media commission bill which was used to suppress the media. The freedom of expression, freedom of speech and freedom of the media is a priority for us.”

Since the new government took office in January there has been a flurry of interest in opening new media houses.

“There is a significant interest to establish private media houses,” Jones says. “We have received applications requesting broadcast licences. There have been four requests for TV stations and three for radio stations.”

Even the country’s journalists’ union has praised the new government. “They have been very open and welcoming to our ideas,” explains Emil Toure, the general secretary of the Gambian Press Union. “They have agreed to our demands to repeal all the laws that held our country’s media back.”

Jobe is still coming to terms with his new found freedom.

“I sometimes have to tell myself this is not a dream. That this is real. That Jammeh is gone and I can work freely,” he says, smiling. 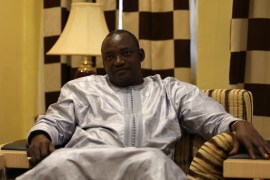