The communist political movement in India started in 1920s as an anticolonial struggle when the country was still ruled by Britain .

But the seeds of the first radical Marxist movement were sown in the southern state of Andhra Pradesh shortly after India gained independence in 1947.

The first armed uprising was launched in 1967 in the remote Naxalbari village in the eastern Indian state of West Bengal. The uprising, which began after a farmer was stopped from tilling his own land, was put down by force after 72 days.

But that inspired other revolutionaries across the country.

By 1972, the first phase of what the government called Left-Wing Extremism, popularly called Naxalism – deriving its name from the Naxalbari village – was stamped down.

For the next two decades, armed movement remained subdued and localised until the government started granting mining licences to private and multinational corporations as part of the liberalisation and privatisation of the economy in the early 1990s.

The People’s War Group (PWG) was established in 1976 and was active in Andhra Pradesh, while Maoist Communist Centre (MCC) held meetings away in the eastern state of Bihar.

The Communist Party of India-Marxist Leninist-Janashakti was formed in 1992. It has presence in three states – Andhra Pradesh, Chhattisgarh and Maharashtra. They command a cadre of about 250 to 300.

The current phase of Maoist rebellion began in 2004, when PWG merged with the MCC to form the Communist Party of India (Maoist) or CPI (Maoist). The group is banned in India.

The Tritiya Prastuti Committee (TPC) is a splinter group of the CPI (Maoist) and is based in Jharkhand – a mineral-rich state. It has about 500 cadres.

The CPI (Maoist) aims to capture the state power through people’s war. The rebels’ military strategy is loosely based on the Chinese revolutionary leader Mao Zedong.

People’s Liberation Guerrilla Army (PLGA) is the armed wing of the CPI (Maoists), or Naxals, as they are popularly called in India. A number of Marxist armed groups are active in other states with Maoist presence.

But the government figure is much lower.

“As per available reports, the estimated armed cadre strength of the left-wing extremist groups is around 8,500. However, their support base is in larger numbers,” Minister of State for Home Kiren Rijiju told parliament.

India’s central and eastern parts, home to about 84 million adivasi, or indigenous people, is rich in mineral resources. Renewed mining activity pose a threat to their livelihoods. Most of them are subsistence farmers or landless, mainly living in extreme poverty.

There is lack of basic facilities such as roads, healthcare, education and drinking water in the region.

Thousands fear displacement as the government moved to exploit the hidden treasures located mainly in the states of Chhattisgarh, Jharkhand and Odisha.

Maoists from Andhra Pradesh helped organise tribals in Chhattisgarh over the issue of land rights and displacement during the 1980s. The state has emerged as the stronghold of the Maoists in recent decades since 2000 when mining was initiated.

“They [Maoists] helped the tribals in keeping the forest guard and redistribution of land. So a lot of local people joined them,” said Nandini Sundar, professor and author of The Burning Forest: India’s War in Bastar.

“About 80 to 90 percent of their cadre comes from local tribals. They are deeply embedded in the villages. At the same time, it is not that everybody supports them.”

The Maoist control in what is euphemistically called the “Red Corridor” – spread across the states of Chhattisgarh, Odisha, Jharkhand, Bihar and Andhra Pradesh – has been dwindling as the government has sent tens of thousands of paramilitary forces into the affected states.

Their presence has considerably gone down from nearly 200 districts across 20 states until a decade ago to 106 districts across 10 states. The states of Chhattisgarh, Jharkhand, Orissa and Bihar are considered severely affected. Maoists are also present in the states of West Bengal, Maharashtra and Andhra Pradesh.

India’s former Prime Minister Manmohan Singh called the Maoists’ rebellion the biggest “internal security threat”. His government launched a security operation in 2009, which was dubbed by the media as the “Operation Green Hunt”.

Since the counterinsurgency was launched eight years ago, violence has escalated and a growing numbers of casualties, particularly civilians, have been reported. More than 100 people have been killed in the violence across the country this year. Last year, nearly 500 people were killed.

More than 20,000 people, the vast majority of them civilians, have been killed since 1980.

The adivasis have been caught in the middle of a conflict that has pitted the Maoists against government forces.

Security forces have been accused of committing mass sexual and rights abuses, and extrajudicial killings of innocent adivasis. Human rights activists and journalists have been targeted for reporting the abuse and unlawful killings.

Maoists recruit villagers for their operation and the latter become vulnerable to arrest and torture by government forces. Maoists have also been accused of killing and torturing villagers after accusing them of being police informers. In many cases, they have resorted to kidnapping for ransom.

The Chhattisgarh state has backed vigilante groups, which have harassed innocent civilians for being Maoist sympathisers. One such vigilante group, Salwa Judum, was accused of killings and rapes. It was finally outlawed by the Supreme Court in 2011.

In recent years, a number of vigilante groups have surfaced with the backing of government, targeting activists and lawyers.

“A situation of civil war still prevails in the Bastar district in Chhattisgarh state but the Indian government refuses to declare this ‘internal armed conflict’, perhaps to avoid monitoring by the UN,” said Dr Lakhan Singh, president of the People’s Union for Civil Liberties.

The government has deployed more than 100,000 troops – a third of them paramilitary forces – to root out the five-decade-old armed rebellion in Chhattisgarh. More than 2,000 people have been killed in the state since 1995. 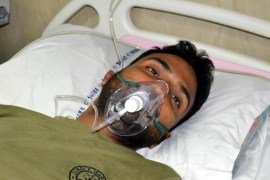 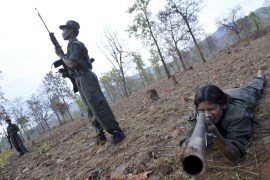 At least 25 soldiers killed in one of the worst attacks on the security forces in Chhattisgarh state, police say.