Sevran, France – A few hundred feet away from Sevran’s Beaudottes metro station is a wall of metal attached to a railing, without distinguishing features except for the posters on it.

Every one of France‘s presidential candidates is there and, judging by the levels of damage, it is clear who the Paris suburb’s vandals like least.

Leftist hopefuls, such as Jean-Luc Melenchon, Benoit Hamon and Philippe Poutou, appear to have been spared.

Sevran, with its 50,000 residents, is one of the poorest areas in France, and suffers from high levels of youth unemployment and educational attainment.

Much of its population descends from France’s former colonies in North Africa, West Africa, and Haiti.

Many are also Muslims, perhaps explaining the unpopularity of Le Pen.

However, elections are not determined by the numbers of posters that are defaced and voter indifference remains high in the area, particularly among the youth.

“Many here voted for Francois Hollande, but that ended in big disillusionment for these people,” says Mohamed Ghilli, referring to France’s incumbent president, who decided not to stand due to his low poll ratings.

The 36-year-old has spent his entire life in the area, and now leads Idee, an organisation that provides mentorship for youths in order to help them succeed in school and in their careers.

He tells Al Jazeera that candidates like Hollande had offered a lot during their campaigns but failed to deliver on their promises.

“People are not expecting anything out of the (upcoming) elections and they know nothing will change,” he said.

While the national rate of youth unemployment is just under 25 percent, in Sevran it stands at 40 percent.

That figure represents not only a failure of economic policy, but the opportunities the government gives to areas like Sevran, according to Ghilli.

“There has never been in France a social policy of integration,” he says.

“They build ghettos; the level of education at schools is poor; the local universities are also mediocre, so when you get your degree from those places you end up unemployed.”

This endemic lack of opportunity and absence of political will to change it means few are committed to participating in the upcoming vote, Ghilli says.

He says politicians have little motivation to change the current status quo.

“Politicians know that the people in the suburbs don’t vote and so it’s a vicious circle, so don’t bother with policies to help,” he says.

“As long as the turnout in the banlieues [suburbs] remains low, politicians will not care much.”

The indifference described by Ghilli has its limits and comes in the form of the candidacy of Marine Le Pen.

“Le Pen would be a big disaster for the people living here” is a view echoed in Sevran’s market, where talk of apathy and abstention is limited to the first round.

Dounia, a 23-year-old, says she will cast a blank ballot in the first round in protest against the lack of a suitable candidate.

“Voting is a right and I want to be involved,” she says. “But I’m voting blank because it’s always the same old story: each time we vote for someone, after the election they go back on their promises.”

In a run-off, however, Dounia says she would “vote for the other candidate” to defeat Le Pen.

‘Who insults me less’

Naima, a nurse of Algerian origin, agrees, but says she will vote for Melenchon in the first round due to pressure from her children.

“I’m voting for the one who insults me less,” she says but with a big caveat: “I don’t really trust those in positions of power. … When they want power, it’s not for us; it’s for themselves.”

For Yacine Hilmi, a CCTV engineer and a community organiser in Sevran, the election is far more important than just a question of picking the lesser of two evils.

The 33-year-old, who was born and raised in Sevran and is of Moroccan origin, says apathy, especially among youths, is understandable considering the scale of deprivation in the area.

“The first priority for these youths is not the elections but to get a job or to be successful at school,” he says.

Still, Hilmi says the youth, who have grown accustomed to a powerful FN and did not know it as a fringe party, need to appreciate the threat it poses.

“I believe the stakes are high in these elections,” he says.

“They will shape the life of the people who live here but people don’t realise it.

“Voting is crucially important in these elections because there is a genuine risk that the far right will get into power and the people here are not aware of the impact that it would have on their lives.”

Even if it comes down a run-off between Fillon, a conservative candidate who has few fans in Sevran, and Le Pen, Hilmi’s policy is to vote for anyone but the far-right leader.

“Without hesitation, I would vote for Fillon.” 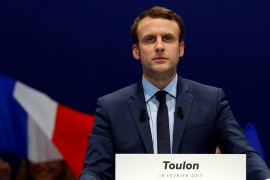 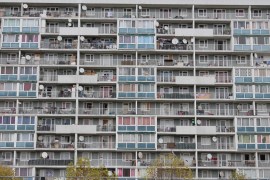