Lyon, France – The city of Lyon, in southeast France, has been the staging ground for some of the most important rallies in the 2017 presidential race.

It was there that far-right candidate Marine Le Pen formally launched her election campaign, while her greatest rival, centrist Emmanuel Macron, held a competing rally in a different part of town. And anti-capitalist Jean-Luc Melenchon chose the city to perform a first-of-its-kind hologram broadcast, beaming himself to another rally in Paris.

But in a subterranean theatre in the city’s oldest district, an iconic character is also taking the stage, preparing to launch barbs at what he sees as the candidates’ blockheaded antics. And he should know. After all, he’s a blockhead himself.

Barely a foot and a half tall, with a body made of cloth and a head carved from linden wood, Guignol has long been a political force in France – though lately, he is often relegated to the world of children’s theatre. Such is the life of a hand puppet.

This weekend, however, Guignol is returning to his roots. He is reviving a brand of satire built on the streets of Lyon – where he was first used to distract 19th-century patients as they got their teeth pulled out in plain sight – and he’s applying it to an equally painful public event: the national elections.

A puppet of the people

“Let it be over quickly!” groans Philippe Secle, one of the many actors and comedians who have voiced Guignol over the past 200 years. In France, voter apathy is running high, and Secle sympathises.

“At a certain point, you hear of nothing else, all the time,” he told Al Jazeera. “You end up drowning in it.”

There’s a bright side to the onslaught, though.

All the political scandals and surprises have given satirists such as Secle fodder for their work. He and his colleagues at the Guignol de Lyon theatre are using France’s topsy-turvy election season as inspiration for their latest production, a throwback to Guignol’s roots as adult comedy.

“Les Parsidentielles” is scheduled for the eve of Sunday’s voting, and its titular misspelling is intentional.

“That’s Lyonnais,” Secle growls in an overwrought accent, referring to the local dialect. “Lyonnais is a patois, and ‘parsidential’ is the Lyonnais way of saying ‘presidential’.”

It’s a folksy touch that jibes with Guignol’s populist roots. He was designed in his maker’s image: as a labourer in Lyon’s struggling silk industry, a backstory that still resonates centuries later, as France’s manufacturing industry continues its decline.

“He represents the workers, the unemployed and the poor, and he’s the guy who whacks the establishment with his bat, so to speak,” Secle says. “Since the beginning, he has beaten the police. He’s beaten the landlords. And eventually, he’s beaten people a little bit higher up. He’s a man of the people, above all.”

In “Les Parsidentielles,” Guignol will turn his bat towards the politicians vying for the top spot in the Elysee Palace. And Secle says there’s a wealth of material to choose from.

First, there’s Francois Fillon, the austerity-minded conservative who stands accused of paying his wife for work she doesn’t do.

“That seems indispensible to me,” Secle says. Then there’s the “full-scale explosion” of the Socialist Party, aided by Francois Hollande’s dismal approval ratings. Not to mention the two front-runners, Secle adds.

“Macron, we don’t really know what he stands for. He’s neither right nor left,” he says. “And Le Pen, we know very well what she stands for,” alluding to her vocal support for nationalist and anti-immigrant policies.

Never in his 48 years has he witnessed an election like it, Secle says. It’s the first time he remembers seeing four candidates so closely tied in the polls. Two of the main contenders – Macron and Melenchon – are running as the leaders of parties they only recently founded.

Though France’s current political situation may be unprecedented, some of the same forces are at play today as in Guignol’s time.

Anne Lasseur, head of collection services at Lyon’s Gadagne Museums, points to the power of modern-day satire as evidence of Guignol’s ongoing impact.

Just this year, one of France’s biggest satirical papers, Le Canard Enchaine, broke the story that Fillon was allegedly using public funds to pay his wife a salary.

Guignol notably gave commentary on the political news of the day or week, albeit with an ironic style.

In the 19th century, Guignol puppetry served not only as public entertainment but also as a conduit for the spread of information, just like satirical news shows today. “Guignol notably gave commentary on the political news of the day or week, albeit with an ironic style,” Lasseur explained.

That role was born of necessity.

“Back then, there weren’t as many newspapers, so people came to the bars and cabarets at night, and they exchanged news,” Lasseur said. Travelling puppeteers incorporated the stories they heard into their routines, thereby spreading the latest information throughout the region.

It helped that Guignol was a hand puppet, and not a more complicated marionette. Performers could improvise more easily than if they were hunched over a puppet theatre, tugging at strings. Their movements were the puppet’s, and that allowed them to interact more directly with the audience. Lasseur credits this with helping the puppet stay relevant.

“It created a different discourse,” Lasseur said. Secle, for his part, says it feels exactly like being onstage yourself.

In the mid-1800s, Guignol’s growing influence would eventually backfire. Plunging silk prices drove Lyon’s workers to revolt, not once but three times. Guignol – himself a miniature silk worker with a penchant for gathering crowds and mocking the authorities – started to attract suspicion.

Napoleon III was a popular target for Guignol’s insults, and soon his secret police were censoring the performances. Improvisation was outlawed, venues were restricted and scripts had to be submitted in advance. Eventually, the advent of music halls, and eventually cinemas, would diminish the need for puppetry altogether.

ALSO READ: In search of alternative media in France

‘No subject is taboo’

But Guignol, with his beady eyes and flattened nose, had left an enduring impression on French society – and even on global satire. French satire has since developed so that “no subject is taboo”, Lasseur said. “You can attack religion, politics, money. All the subjects. There’s a lot of tolerance, with regards to critiques that are expressed – and are best accepted – through laughter.”

Just as his subversive spirit endured, Guignol himself never really disappeared. He cropped up again in the French trenches during World War I, as a tool for soldiers to express the horror they experienced and the displeasure they felt with their leadership.

And later, in the 1980s, France’s first premium TV channel, Canal, would launch a show named in his honour: Les Guignols de l’info. To this day, latex puppets continue to host the programme, which emulates the style of television news and mockingly covers the day’s current events.

“It was directly counter-programmed against the nightly news,” said Waddick Doyle, a professor of communications at The American University of Paris. “So for many years, you had the puppet version of a news anchor and the real guy competing at the same time on two different networks.”

Back at the Guignol de Lyon theatre, Secle muses about what it means to be satirising France’s political drama as it unfolds. “It’s a mise-en-abyme,” he says, using the French term for a series of endless reflections. “We manipulate marionettes that talk about the politicians who manipulate us, who themselves are manipulated.”

Fresh from an afternoon performance, Secle plops down in a chair and starts to roll a cigarette. Shows can last anywhere from 40 minutes to an hour – in other words, a long time to keep one’s arm extended upwards, in the air – and now he needs to get home to cook dinner for his kids.

The other performers are already filtering away, one puppeteer teetering off in the four-inch platform shoes she wears to reach the stage. Secle’s mind, meanwhile, drifts to the 2015 terrorist attack on the satirical paper Charlie Hebdo, which claimed 12 lives.

“Several years ago, [satire] didn’t shock anybody in France, because satire was something so completely embedded in our traditions,” he says wistfully. “In France, we live with satire and we die with satire. It’s really something that’s in our blood.”

To keep in true Guignol tradition, he plans to make the script for “Les Parsidentielles” as timely as possible, even if that means writing parts of the script at the last minute on the day of the performance. And he’ll do the same for the second performance “Parsidentielles”, to be performed before May’s final round of voting.

“We’re going to make something funny and off-kilter, to help make people laugh and grind their teeth at the same time,” he says. “It’s important to us to make this tradition last, to allow this character who strikes back against the establishment to endure.” 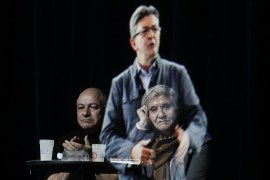 The dawn of cyber politicians

Could holograms, as used by France’s Melenchon, Turkey’s Erdogan and India’s Modi be the future of political rallies? 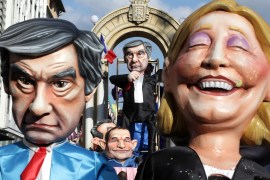 Fillon and Le Pen: A tale of two scandals

Both candidates are embroiled in financial scandals, but only Fillon has suffered in the polls because of allegations.